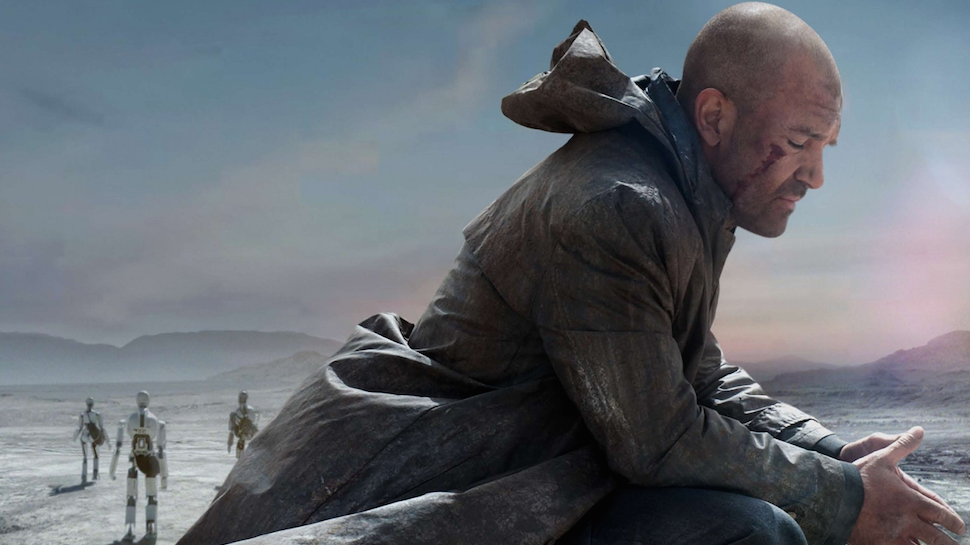 It’s 2044 A.D. and 99% of the human population has perished from radiation. It’s a testament to how flawed, unfortunate and cliché this movie is that I feel bad for the surviving 1% of the world who had to weather this foggy, nonsensical I, Robot knockoff.

The ROC Corporation (of course) built robots to construct walls and protect humans from radiation, but they soon became our servants, drivers, sexbots. You know, the usual. Gabe Ibanez’s dreary dystopian film borrows liberally from Isaac Asimov and his Three Laws of Robotics, which isn’t a crime (every sci-fi movie takes after the visionary author), but it’s a crime what he does with it. The Pilgrim (ironic name, no?) models are designed with just two protocols: a robot mustn’t harm humans or alter itself. These are “inalterable” rules, but we all know better. The shadowy, corrupt ROC Corporation doesn’t.

Automata’s world is a hodgepodge: the city is dark, noxious and full of garbage and filth (or Blade Runner). It’s all grey hues, as dull as this movie. I love some of the flourishes, to be sure: a gigantic holographic boxing match airs alongside skyscrapers, and if you’re not a sports fan, there’s hologram porn broadcast through the cityscape. I’m a sucker for zephyrs (especially ones with massive Matrix-like cords/entrails plugged into the earth), but they’re just window dressing; a false hope. When the action moves to the canyon addled desert, Automata takes after the Mad Max and A Boy and His Dog school of sci-fi. 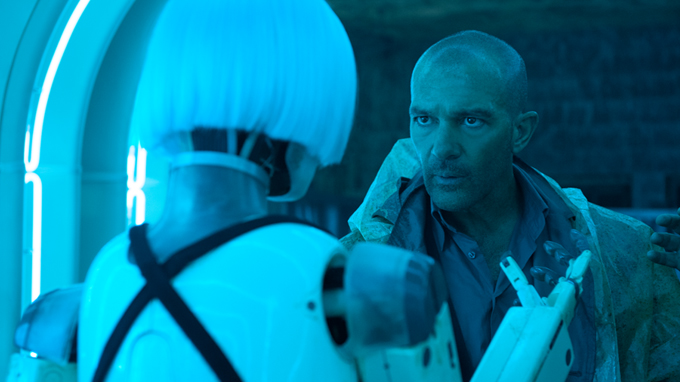 I was drawn to this movie because it was a sci-fi movie starring Antonio Banderas. Unfortunately, the two prove to be a colossal mismatch, and not even in an amusing way. Banderas is JackJacq Vaucan, who works for the ROC Corporation (“You’re an insurance agent, not a cop!”), who stumbles upon a model of robot that has been changed, missing the second protocol. When Jacq tries to tell this to ROC’s scientists, they huff and puff and deny the possibility, like they’ve never seen a science fiction movie before: “it’s like trying to put a soap bubble in your pocket,” they say, describing how impossible it would be to manipulate a robot’s “bio-kernel.” WHAT? “Do you get it?” NO. Jacq’s told to leave it alone, and is even promised a transfer to the Ocean by his boss Robert Bold (a wasted Robert Forster). BUT HE CAN’T DO IT (“not bad for an insurance agent” is an actual line uttered amid the clutter). Jacq suspects Clocksmiths are behind it, like we know what those are. Sure, I can assume they’re some fun underground scientist sect that manipulate robots on the sly…but we’re never given any explanations, and Jacq feverishly holds onto their existence like it’s the only plot point in a maelstrom of dunder-headed dystopian dandruff. Oh.

The “idea” of Clocksmiths lead Jacq and Wallace to a sexbot brothel, a tried and true sci-fi tradition. Wallace is a blustery cop who pairs a poncho and sunglasses together for the first time in human history. It’s a get up that only Dylan McDermott can pull off, but that’s the only thing he manages to pull off in the entire movie. When interrogating the Madam, there’s a gut-busting moment where he blurts forced, unnecessary and out of nowhere exposition (“My wife’s dead!”) and then shoots a robot, because that’s all Wallace does. The robot in question is a sex bot named Cleo (as in Cleopatra). The most thought I dedicated to this movie was wondering where Cleo’s holes were. The holes in this movie are far easier to spot. 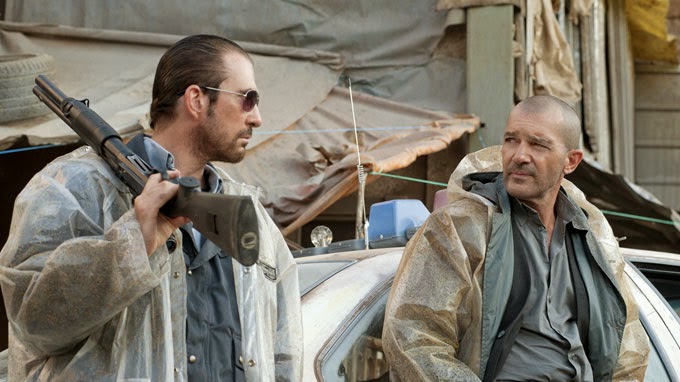 From there, stuff happens. There’s an inexplicable car accident in a wide open desert, when Jacq and company were in a crowded city moments before. There’s some of the most egregious overacting (McDermott) and underacting (Banderas) in a movie this year. My favorite part is when two kids appear out of nowhere and blow the head off of a seemingly important side character (if anyone can be labeled as important in this dreck), a moment that is never reconciled.

Banderas delivers a barely there performance, his dialogue spoken in perpetual whispers, disastrously coupled with incoherent slurring. Several times I had no idea what he was saying, but it hardly mattered. He seemingly ages 30 years over the course of this movie, like the viewer.

Jacq has a pregnant wife (Birgitte Hjort Sorensen) to force us to care about him (instead of actual characterization), but if it weren’t for her massive belly bump, I might have mistook Rachel for wallpaper. She can’t name the baby without Jacq or make any decision without him, and changes her mind to Jacq’s whims, and never leaves their depressing apartment until coerced.

While Jacq stumbles through the desert in this interminably long-feeling movie, there actually are villainous old men in suits discussing the history of robotics, and what the protocol breaking could mean. The movie is filled with moments pilfered from every robotic sci-fi story you’ve ever seen or read. Perhaps even more criminal than the film’s laundry list of flaws is the general apathy Automata promotes. It’s plodding, boring and incoherent; the kind of movie you wish you had napped through.

Earlier in the movie, we’re told that anyone can dance. It’s just counting, silly. The “payoff” comes in the guise of an uncomfortable scene where Jacq drunkenly teaches Cleo to dance to the oldies tunes anachronistically garbling out of a jukebox, Cleo’s latent sex-bot programming bubbling to the surface in the form of automated sex noises. Anyone can dance, sure, but not everyone can make a movie.

Millennium Entertainment will release AUTOMATA in theaters and OnDemand October 10, 2014.