Welcome to the Binge Project series! These Binge Projects will feature me reading or watching an entire run of comics, books, TV shows, or other media in rapid order, then writing expansively about the experience. This installment will be a slower process, as I work my way through the lengthy “The Wheel of Time” book series.

Book 3 (now with a new edit regarding the ending)

The Shadow Rising is the fourth installment of Robert Jordan’s The Wheel of Time series, and it’s also easily the most difficult for me to evaluate thus far. I can think of hardly any books off the top of my head that have given me such ecstatic highs and such frustrating lows all within one story. There are major steps forward in character development that are downright thrilling, and deepening gender issues that sap much of that momentum. I could argue it was the worst book of these first four, or by far the best. So let’s jump in and try to work through a few issues, because as you can guess from this intro, there’s a lot worth discussing here.

Let’s start with the good in the book, so that I can pretend I’m an optimist. And there is a lot of good. The biggest positive aspects relate to protagonists taking giant steps forward as Jordan starts to let his characters grow more from their experiences thus far. And the biggest growths come courtesy of Rand and Perrin. As I’ve said before, both characters have had a lot of semi-whiny moment thus far — justifiably so, given their circumstances, but the “why me?” denials were often not exactly endearing, either. Neither character is still entirely comfortable in their new situations, but in The Shadow Rising, we see them start to take charge in a big way despite their remaining misgivings. Personal doubts and inner conflict become a lot more interesting when they’re paired with external action (at least in this series).

Rand’s character development is probably more significant, given his status as the main protagonist. His POV disappeared for most of Book 3, and he re-emerges here a noticeably changed man. He’s no longer fighting his destiny or who he is, and a result, he’s become colder, more calculating, and more capable. His powers are still unrefined, but they’re significantly beyond what he’d shown previously. More interesting, though, is his growth as a schemer. The scene in the Stone where he skillfully maneuvers to take out every challenger in Tear over the course of a single speech impressed me more than all three of his fights with Fake Ba’alzamon combined. His secretive planning shows how far he’s come in a short period of time, and how much cooler he might yet become.

I was particularly glad to see Rand make the surprise trip to the Waste. After being almost forced into embracing his status as the Dragon Reborn, he moves quickly and far more willingly to fulfill another prophecy as the Aiel’s He Who Comes With The Dawn. (And he likely has at least one more prophecy to fulfill, with the introduction of the Sea People’s Coramoor prophecy.) While Jordan teases us a bit by not telling us yet what Rand’s larger goal is, I certainly can’t complain that Step One involved trying to unite the Aiel behind him. His visions in Rhuidean began filling in backstory in breathtakingly shocking fashion (the Tinkers are the one true Aiel?!), and the increased glimpses into Aiel life were highly enjoyable; they’re the coolest group in the series so far. Whatever Rand’s next step is, it’ll be a lot more fun of a ride with an Aiel army presumably behind him.

Some of the subplots in the greater Rand storyline did drag a bit. Aviendha’s bitchyness was painful to read, and a symptom of the larger gender issues to be discussed later. Additionally, I didn’t give two shits about the peddlers that Jordan kept dwelling on to make sure we knew they’d be important. But even that was worth it for the payoff of Asmodean at the end, and the prospect of Rand finally having a teacher of saidin. I thought for sure that when Logain surprisingly re-entered the narrative during Suian Sanche’s escape from Tar Valon that he would be Rand’s eventual teacher, but a conscripted member of the Forsaken should be even more interesting.

Mat got less development in this book, but his scenes through the archways were still very interesting; I have no idea yet what to make of the spear and medallion he received. Two characters — Mat and Moirane — have a vague reference made to their fated eventual spouse in this book, which allowed me to amuse myself for a while by imagining they’re destined to marry each other, because what a damn pair that would be. Alas, Egeanin’s later reference to Nine Moons would seem to likely tie Mat’s intended to the Seanchan. The Seanchan empress, perhaps? That would still be a crazy pairing. I can’t even imagine who Moirane will end up with (Egwene?).

The final major high point, maybe the highest of the book for me, was the massive step forward by Perrin. I liked a lot how the character ended The Dragon Reborn on a high note, but even so, was hardly prepared to see his badass levels go up exponentially like they did. While still playing the role of reluctant hero, Perrin becomes the general of a ragtag army of farmers, and ends the book as not only the defender of his town/region, but the conqueror of a Trolloc invasion force numbering in the thousands. Along the way, his storyline escalated Padan Fain’s role a bit, and introduced the secretly villainous Lord Luc/Slayer, who is secretly Lan’s presumed dead brother, Isam; I’ve been waiting for Isam’s introduction ever since he was mentioned in passing during Lan’s backstory exposition in Book 1, and now that he’s entered the narrative, I’m looking forward to the inevitable clash of brothers. 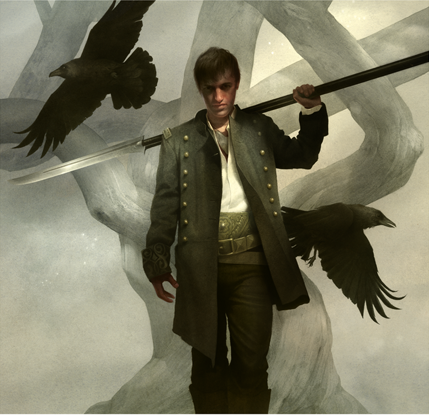 The other great part of Perrin’s story — at times the greatest part — was his relationship with Faile. They do go through a highly annoying rough patch, also indicative of the gender problem that I’m about to finally cover. But when they finally come through it on the other side, it’s wondrously moving. The way all their tensions melt away in the face of Perrin’s tragedy was among the best scenes thus far, and for once, Jordan didn’t lose the momentum of an actual functional relationship, adding a marriage and Faile’s rescue at the end (where Perrin gets to be the damsel in distress). They’re a truly wonderful couple, which is great, because they’re about the only one.

And now we come at last to the debilitating problem that frequently threatened to derail The Shadow Rises, and remains a serious problem going forward for The Wheel of Time. And that problem is: Jordan’s women are mostly just really, really horrible to be around. They’re almost all extremely moody and very fast to jump all over male characters for minuscule perceived slights. They play mind games with the men in their lives and are furious when they don’t get the results they want. Heaven forbid any male try to prevent harm from coming to them (even in totally non-patronizing ways). They’re quick to try to “teach a lesson” over anything or nothing in particular. They’re almost all quick to anger and overly proud. It feels like Jordan is subscribing to the stereotype put forward by Jack Nicholson’s character in As Good As It Gets.

But here’s the thing about all that: I really believe that Jordan was setting out to create a feminist (or at least pseudo-feminist) take on fantasy world-building, but ended up butchering it so horribly that he comes across as accidentally sexist to me. So much of his world is based on the power of strong women. Almost every female character is a ruler (or closely related to one), a powerful wielder of the One Power, or both. He wants his women to stand up for themselves and their importance, but they inevitably go far beyond that. Every male-female pairing (both romantic and platonic) ends up more as a fight than a relationship; sure, some fighting in relationships is realistic, but until the Perrin/Faile reconciliation, that’s nearly all there is in these relationships. The men don’t necessarily come across great in those arguments, but the male faults are almost always sins of ignorance, as opposed to the women’s role of being frequently demanding and unreasonable; which is worse, being clueless or being a hateful bitch? Jordan tries to paint them as equal, but they’re not, and they don’t create the same feeling when reading. It’s a serious problem that seems to only be growing with each successive book.

Not that the female characters don’t still get some moments to shine. They’re invariably at their best when Jordan lets them loose to do something badass in battle; while Egwene is mostly left out of that arena this time, Elayne takes out a Black Ajah member convincingly, while also getting extensive POV chapters for the first time. Nynaeve gets an even bigger coup, defeating a member of the Forsaken single-handedly. It’s still unfortunate that both are portrayed as angry shrews for much of the novel, but Jordan redeems himself a hair by giving them those important positive moments; Nynaeve’s battle might have been the single best fight of the book. The fall of the Amyrlin Seat was also very dramatic and should create a good storyline for those women going forward.

So how do these truly exciting highs and these truly troubling lows even out? I would still say the highs have it, and to go back to my introduction, I would have The Shadow Rising as the best book of these first four, despite all its troubles. There was just so much character development and change and hints at greatness still to come. That doesn’t excuse the problems, of course. Jordan has real issues with writing strong females in a way that they don’t come across as just hateful; it’s frustrating that his strong males don’t have the same result. But a flawed story — even one with such a gigantic, tragic flaw — can still find itself as an overall success. It’s more of an odd situation, certainly, and I wish I could have ended by feeling as unreservedly positive about the book as I would have if those problems had not been present. But I still came away looking forward to reading more of the series, and hoping that we can hit a groove with even greater highs and fewer lows.

NEXT TIME: The Fires of Heaven, Book 5 of The Wheel of Time