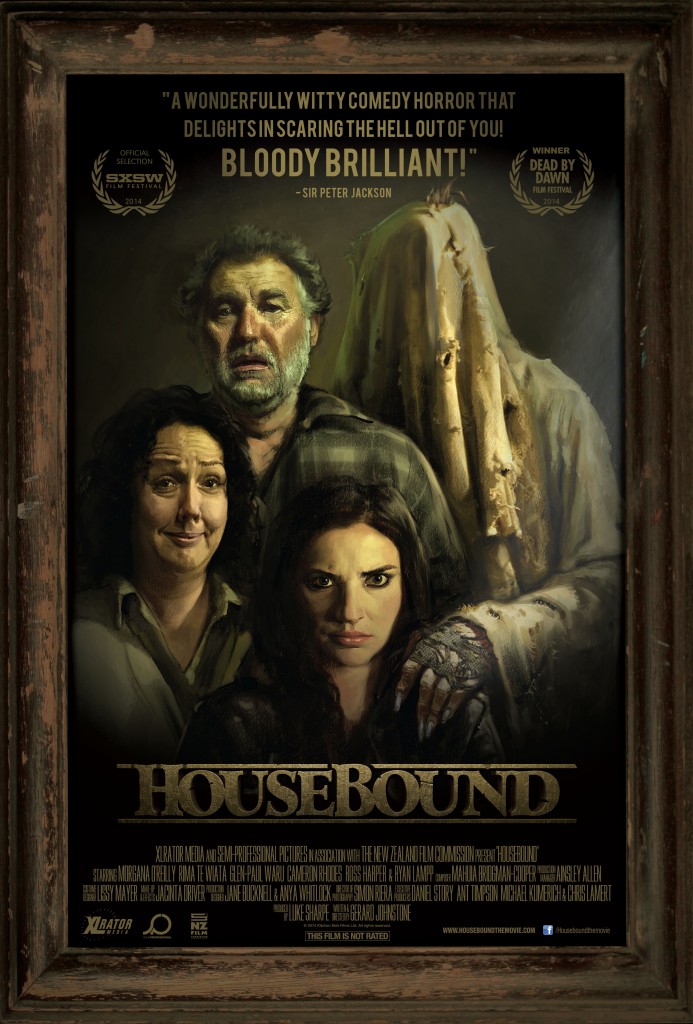 Kylie Bucknell (Morgana O’Reilly) is a perpetually pissed off juvenile delinquent, except she’s closer to 30 than high school. Treatment facilities have failed time and time again, so she’s sentenced to eight months of house arrest with her mother Miriam (Rima Te Wiata, MVP) and her “cabbage in a polo” husband Graeme (Ross Harper) in Bulford, a small town off the Twin Coast Highway in New Zealand. Worse even than the fact that the house is most definitely haunted? It’s still got dial-up internet.

It’s like a retro Disturbia (but not quite Rear Window) meets every haunted house movie ever. Or so writer-director Gerard Johnstone would have you believe. We’re immediately put on notice that we’re getting something entirely more clever, funny and original than that constrictive description by how Kylie gets into this mess. The movie opens with Kylie and her partner in crime robbing an ATM. The man attacks it with a sledgehammer relentlessly, until it bounces back and absolutely decks him across the temple. As Kylie tries to make her getaway in the parking lot, her car immediately stalls out on the first curb she attempts to drive over. That’s exactly what you’ve always wanted to see: getaways never happen as smoothly as they appear in the movies, and Housebound is as keenly aware of movie stereotypes as the viewer is.

Most of the time. Kylie is antagonistic, angry and we know she’s troubled because she’s a chain-smoker. Just once, I’d like a criminal/malcontent to NOT smoke. That’d be practically revolutionary. Anyways, Kylie is kind of the worst: she eats all of her Mom’s meatloaf, which was supposed to be dinner for everyone. And she doesn’t even let Miriam watch her stories! Miriam is a folksy, incessant and mindless gossiper, the would-be lead in Fargo: New Zealand. In other words: she’s an unbearable delight.

But Kylie and Miriam have more pressing matters than meatloaf, as sacrilegious as that sounds. Weird and spooky things begin to happen, and quickly escalate, as one would expect when the cameras start rolling. It’s got all the elements we’ve become indoctrinated to and then some: Kylie’s parole officer Amos (Gabriel IglesiasGlen-Paul Waru) is the enthuastic and bumbling believer in the paranormal. Kylie has to endure painful therapy sessions with Dennis (Cameron Rhodes, Farmer Maggot in Fellowship of the Ring). But throughout are gleefully hilarious and terrifying moments, as when Kylie takes the world’s longest pee, and each time she stops, creepy laughter haunts her overhead. And don’t get me started on the possessed teddy bear, who makes Lots-o’-Huggin’ Bear look like…a normal teddy bear.

For the first half of the movie, Housebound doesn’t seem to know if it’s a parody or a well-crafted (but cliché) horror movie, but it keeps piling on. The house wasn’t formerly a bed and breakfast as assumed, it was a halfway house, and obviously there was a gruesome unsolved murder involved. The opossum-skinning neighbor is terrifying (and smokes). Kylie and Amos are on the case, but no one else believes the sinister plot they (and the audience) become convinced of. There’s a very Hot Fuzz-like atmosphere with the police and townsfolk, frustratingly refusing to believe anything’s the matter despite overwhelming evidence to the contrary. Thankfully there are enough intriguing nuggets to tide you over until the shift when Housebound takes a turn, and it all was misdirection, with the story expanding, contracting, twisting and turning into a hilarious, bloody romp. The last half hour of the movie is pure horror movie bliss, giving the cheese grater and laundry hamper their chance to shine in the annals of the home invasion subgenre.

Housebound starts as an increasingly knowing horror movie, the creaks and crashes in the house practically accompanied with a wink and jolts of humor and terror for good measure. And just when you’re settling into the pattern, Johnstone’s film becomes one of the most entertaining, surprising and delightfully insane movies of the year, proof that there will always be more haunted house stories to tell.

HOUSEBOUND arrives in theaters, VOD and OnDemand on October 17th.