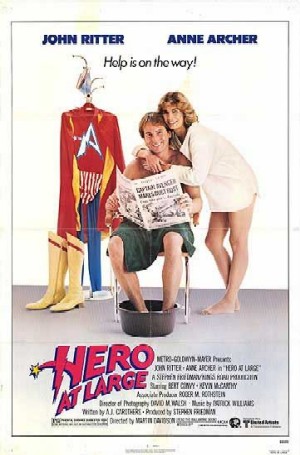 Hero at Large, a 1980 superhero comedy from MGM, is not going to be the most complicated movie we go through. Its wikipedia page sums up its entire plot in six sentences, and does a pretty thorough job, too. It’s also not going to be the best movie we discuss, or even the funniest (I think the 1966 Batman: The Movie has that title on lock). But it is the most John Ritter-y movie on our list, and in fact, wins that distinction quite easily. Mostly because it’s the only one with John Ritter, and that alone makes it worth the watch.

Ritter plays Steve, a struggling NYC actor who’s too nice for his own good; an early scene involves him losing a role in a beer commercial because he told a friend he should also audition for it (and the friend got the part). Things change when a movie called Captain Avenger comes out. We’re told repeatedly that the movie is awful, so the studio execs have tried to drum up business by hiring a few dozen actors (including Steve) to dress up as the titular hero in front of movie theaters. The many Captain Avengers are bused around and dropped off in this thing: 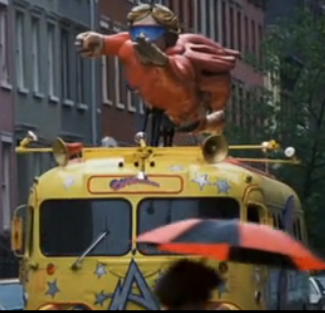 …so this isn’t exactly a glamorous gig. But things change for Steve when he goes into a convenience store after work to buy milk, still in costume. While he’s in the back, two armed robbers come in demanding money. Steve springs into action and fights them off. 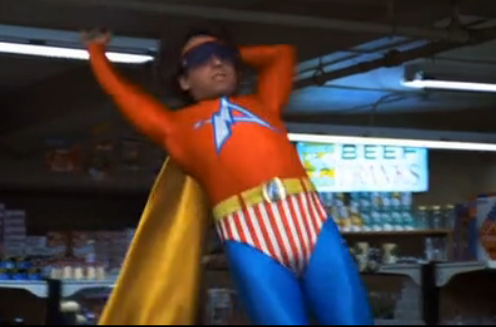 Steve just heads home afterward (the store owners give him the milk for free), never mentioning his real name, but the story becomes front-page news, the entire city falling for the idea of a real costumed hero fighting crime. In one of the movie’s funniest scenes, Steve is thinking about revealing that he was the hero, only to immediately hear the TV news anchor talk at length about how much it would ruin things for everyone if the hero’s identity didn’t remain secret.

So Steve decides to give the secret hero gig another shot. It doesn’t last long, but it does give him a chance to grow closer to his attractive neighbor, played by the lovely and talented Anne Archer, who in this movie unfortunately has little to do but look lovely. 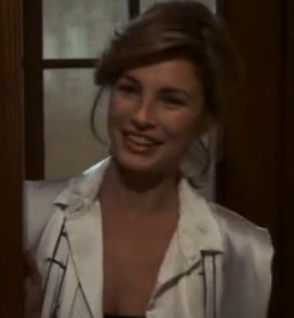 From there, the film can never quite take off. The mayor of New York hopes to exploit the popularity of this fake “Captain Avenger” in order to help win reelection. Steve is caught between wanting to inspire people and feeling uneasy about the mildly unsavory things he’s asked to partake in. But that doesn’t prove to be enough conflict to really push the plot along at a satisfactory pace, nor does it provide a setup for a very interesting climax. It’s not hard to imagine this movie becoming great with a stronger rewrite to the script that gives us a real “bad guy” and a bit more humor along the way.

But it’s still an enjoyable enough way to spend 90 minutes, thanks mostly to Ritter. Ritter died young (just shy of his 55th birthday) and never became the huge star that I think he should have been, but I find him likable in every role I see. Early in the film, he tells his agent that a casting director had liked his sincerity, and that’s an apt enough description of Ritter’s personal appeal. He does have an undeniable sincerity that makes him stand out and his considerable charm feel all the more real. He gives a public speech near the end (as Captain Avenger) where he makes an appeal for the ideal of heroism; it could have come across as horribly corny from most actors, but Ritter lands it. 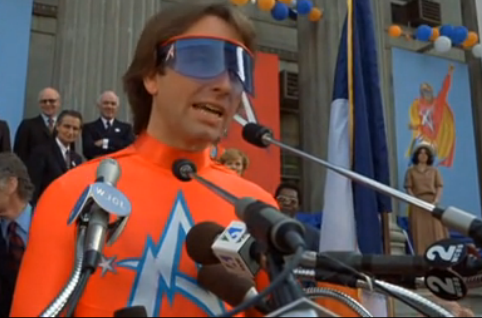 Hero at Large came out in 1980, right in the middle of Ritter’s career role as Jack Tripper on Three’s Company (1977-1984). Bizarrely, the movie does little to take advantage of Ritter’s signature skill from the show, an absolutely mastery of physical comedy.

But give credit where due; at least they realized another undeniable truth: John Ritter was a sexy guy. I think he gets at least three topless scenes. The movie made less than $16 million, but it might have been ten times that if he’d dropped this towel/robe. 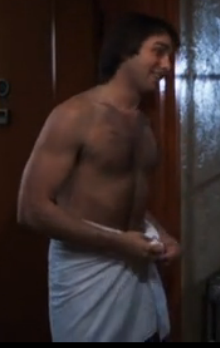 Was that weird to say? I feel like I made it weird. Better end on a crowd pleaser. So here’s a shot from a brief scene with a dog in a tuxedo: 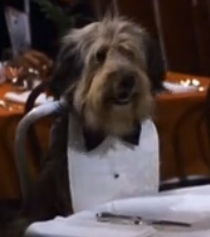