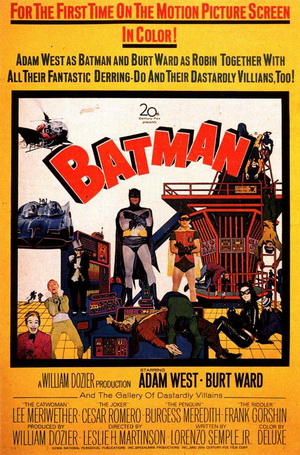 If you’ve looked through my syllabus of films linked in the Superhero Movie Guidebook introduction piece — or if you’ve just followed superhero movies over the past 15 years — then you already know that there are going to be a lot of bumpy moments along this ride. Skip to the end of this post to see what’s coming next week if you need any further confirmation. So all the more reason to really enjoy it when a great film comes up. Luckily, we have one this week, with BATMAN: THE MOVIE.

Like last week’s SUPERMAN AND THE MOLE MEN, 1966’s BATMAN: THE MOVIE was originally intended to help build an audience for a TV show. However, budgetary reasons caused the film to be pushed back a year, and it was made after the first season of the BATMAN show. The show lasted three (glorious) seasons, and I watched many of its episodes on reruns as a kid, though I haven’t seen it in years. I don’t recall ever seeing the movie until now.

Now that I have? Let me say without exaggeration that I think this should be regarded as a comedy classic.

When people talk about the Adam West Batman era, the first descriptive word is often “campy.” I think of campy as referring to silly and exaggerated, so the description certainly isn’t wrong — it is those things. But I feel like calling this movie campy is almost reductive, failing to fully capture how intentional the silliness is and how laugh-out-loud the comedy can be.

To illustrate that point, let’s jump right in to one of the film’s two best scenes, this one coming quite early on. Batman and Robin are out looking for a yacht on their Batcopter (not to be confused with the other Bat-vehicles we see in the movie — the Batmobile, Batboat, and Batcycle with sidecar). For reasons I didn’t quite catch, Batman is on the Batrope when Robin loses control while piloting and briefly plunges him into the ocean. When he reemerges… 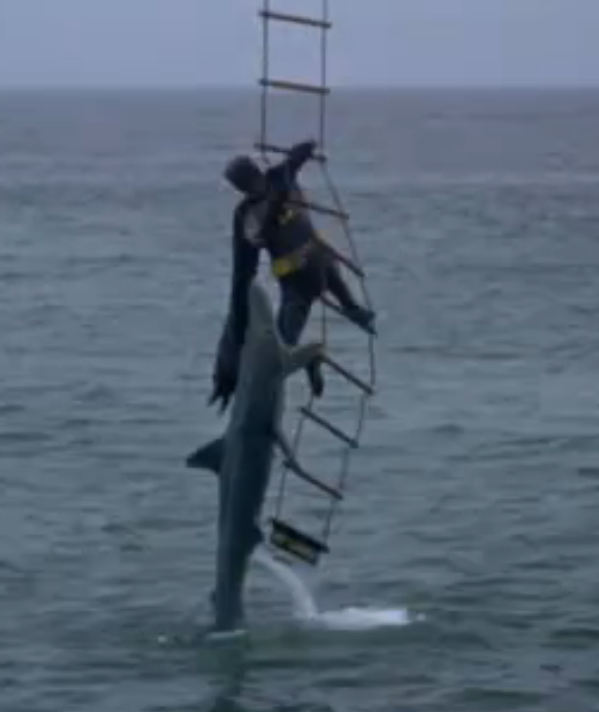 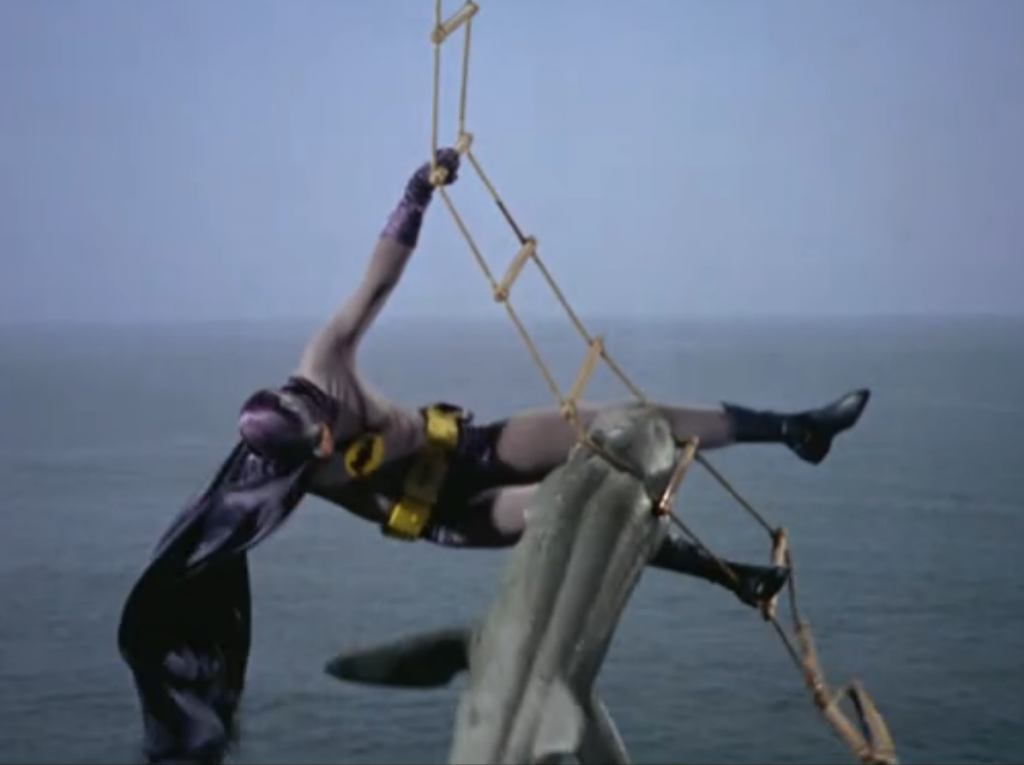 …HE HAS A LIVE SHARK ON HIS LEG.

After unsuccessfully trying to punch the shark off several times, Batman yells for Robin to get the Shark Repellent Bat Spray. Robin puts the Batcopter on autopilot to go get it, but is slowed briefly by having to pick among too many Oceanic Repellent Bat Sprays: 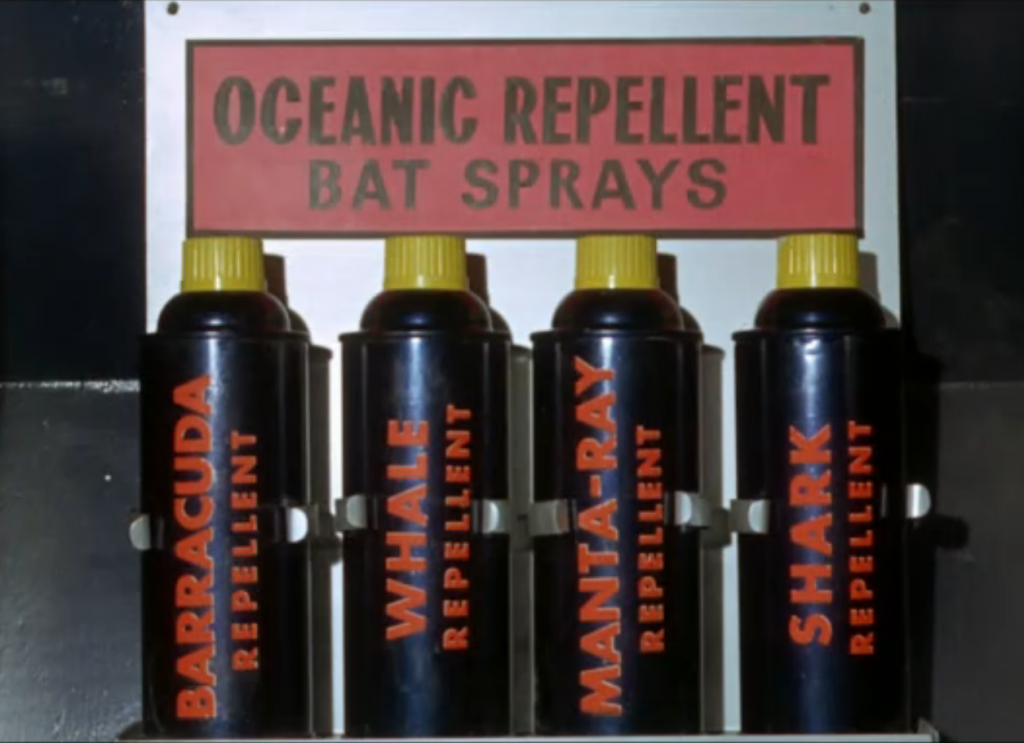 A brief sidenote: are those really the four biggest dangers among sea life that Batman could face? It’ll serve him right if he comes up against a box jellyfish and is unprepared.

So there’s some taste of how BATMAN goes beyond mere camp and into the most brilliant realm of slapstick. So let’s backtrack and take a quick look at our heroes: 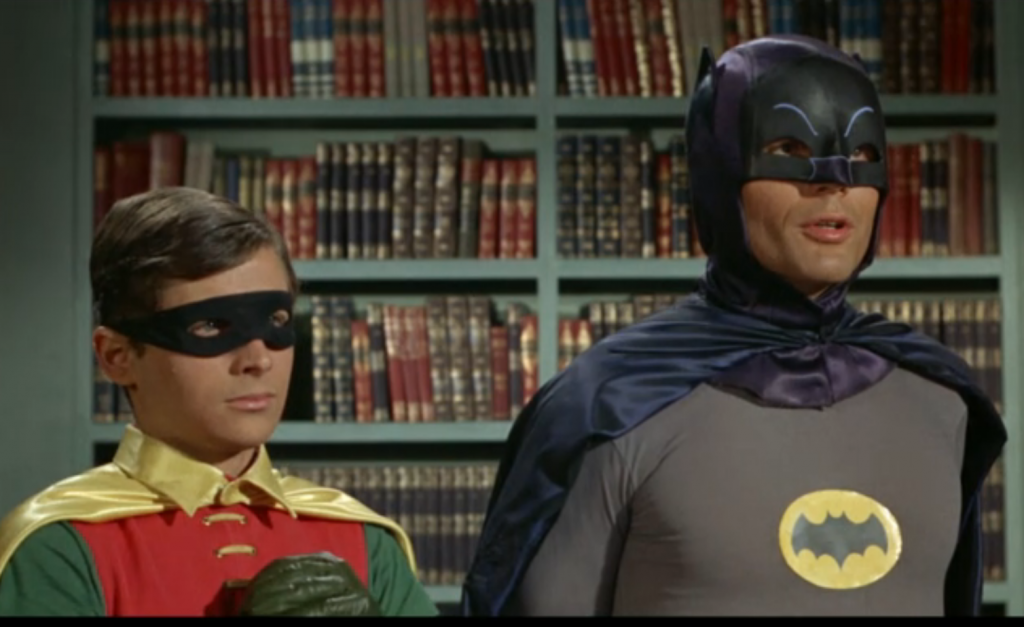 Above we see Batman (Adam West) and Robin (Burt Ward) in their costumes that look so delightfully homemade. Note how Batman’s mask has drawn-on eyebrows, 30 years before Joel Schumacher thought up Bat-nipples. 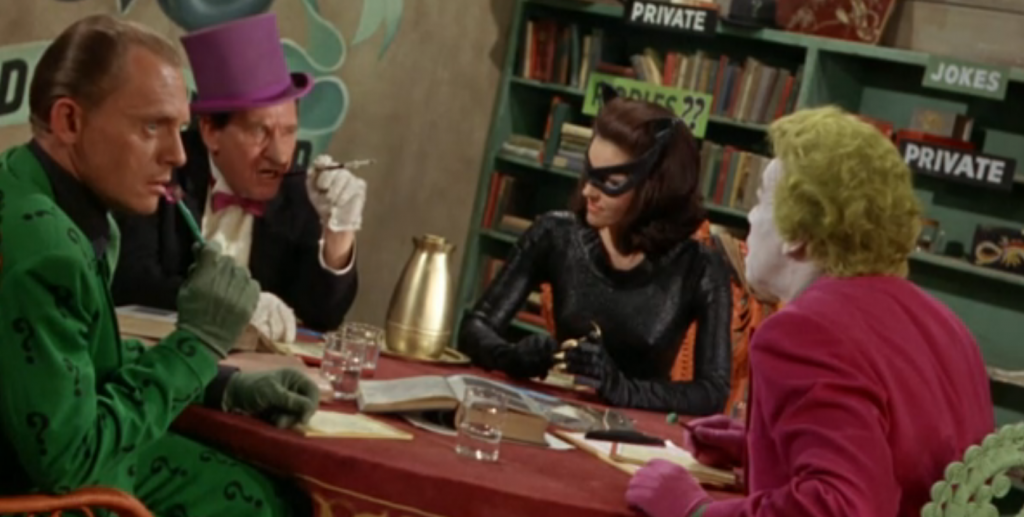 The basic plot revolves around the big four villains of the show, Joker (Cesar Romero), Penguin (Burgess Meredith), the Riddler (Frank Gorshin), and Catwoman (Lee Meriwether) all joining forces for a group they call United Underworld. Only Catwoman was recast from the show, where she was most famously played by Julie Newmar (and later, also Eartha Kitt). As associated as Newmar is with that part, I really enjoyed Meriwether in the role.

Other returning cast members: Commissioner Gordon (Neil Hamilton) and Chief O’Hara (Stafford Repp) shine as Gotham City’s policemen who are always eager to energetically agree with Batman. Alan Napier plays Alfred, who unintentionally/maybe intentionally comes across as a total perv. Alfred’s main scene involves watching with Robin as Bruce Wayne wears a video monitor during a date with “Miss Kitka”/Catwoman (he’s supposed to be bait). When Bruce and Kitka start going at it hot and heavy, Robin respectfully turns off the feed, but Alfred is all like, “uhhhhh maybe we should turn it back on, y’know, just in case.” Robin does, only to see the pair has escalated from backseat makeout into the “slipping into something more comfortable” phase, and turns it back off. And again, Alfred chimes in with essentially, “YEAH BUT LET’S WATCH ANYWAY,” this time a little too eagerly. (Though after seeing Lee Meriwether, I don’t entirely blame him.)

I mentioned the shark scene as one of the movie’s two best moments. The second one was all about the brilliance of Adam West as Batman tries to dispose of a comically oversized bomb, only to continually run into vulnerable obstacles:

West’s deadpan after seeing the ducks kills me every time.

All sorts of ridiculous stuff happens, including a gun that turns people into ashes (and they can turn back to people when water is properly added), the classic Batcave “instant costume change lever,” and some impressions of foreigners that ranged from stock stereotypes to flat-out racist.

But what makes it all work as such great comedy is the group of actors I named above. With the sole exception of Burgess Meredith, every single one of them is best-remembered for their role in this movie (and the show). And those roles, of course, are completely ridiculous. It would have been easy for any of them to mail it in with such campy dialogue and a plot that was often literally insane. Instead, every last one looked committed to the limits of his or her ability. For example, take Frank Gorshin, a famous impressionist in his day, who played the Riddler with such a maniacal glee. He makes his character seem genuinely unhinged, which becomes funny in the context, but could also be seen as almost a blueprint for more serious villainous takes to come later.

Like this post, the film drags on too long. It’s only about 1 hour and 45 minutes, but the shenanigans start to feel exhausting by the end; for the show, they were usually contained to 25 minutes. But eventually, we end up here, with the final fight at last giving me what I wanted most of all: pain words in the air after someone gets punched. 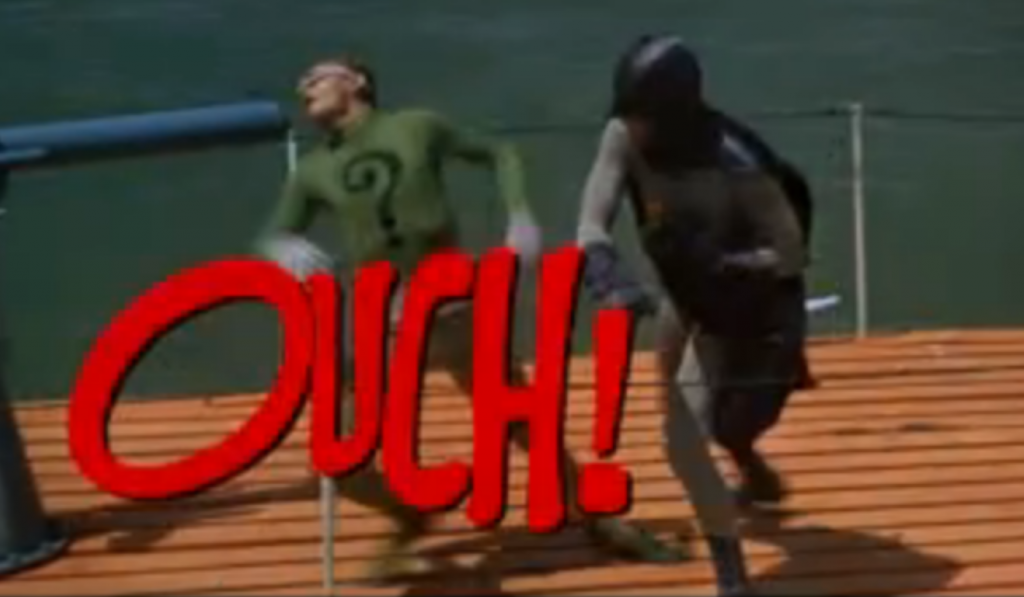 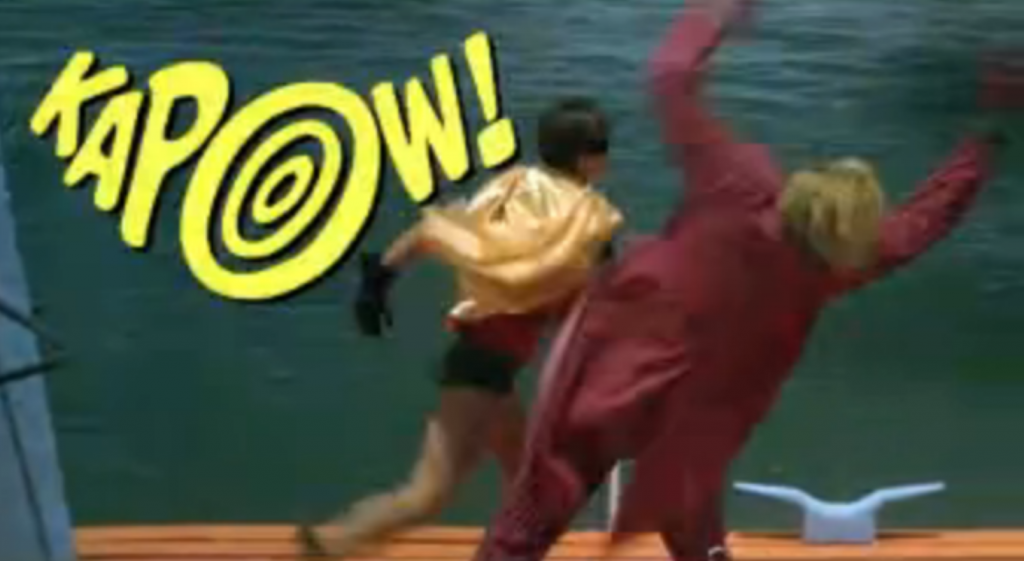 The movie is goofy and dumb but fun as hell. I truly cherished it, and I obviously wasn’t the only one. The Adam West Batman era couldn’t be more different from the modern Batman versions, but it had a charm that continues to draw fans today, nearly 50 years later. Just check out Seven Inches’ founder Andy Greene with modern-day Ward and West: 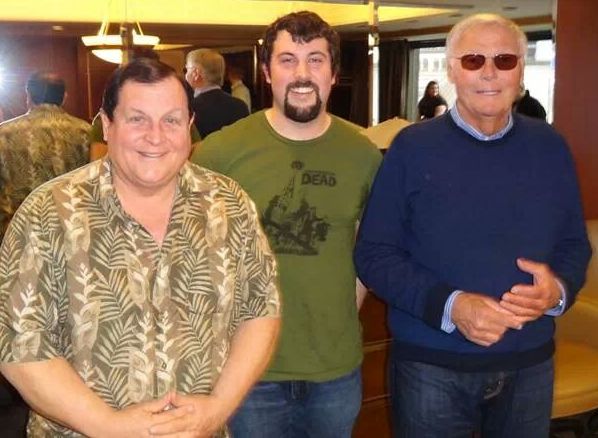 I would suggest playing kill/fuck/marry with the above photo, but I think we’d all just marry Burt, fuck Adam, and kill Andy.

Optional drinking game for this movie:

2. Batman and Robin change into or out of their costumes.

3. There’s any hyper-specific Bat-device on screen. In addition to the Bat Repellent Sprays, here’s another example: 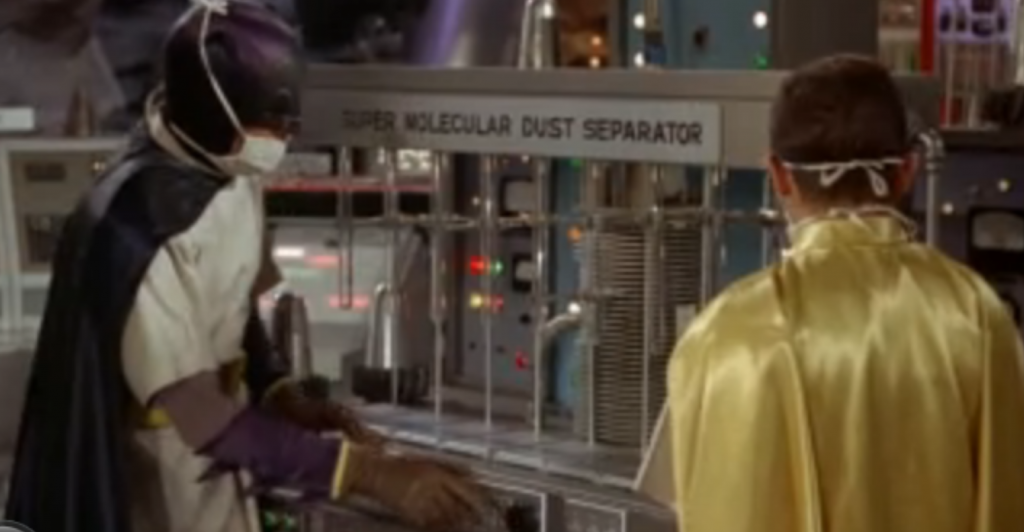 4. A missile or torpedo is fired.

5. Anyone agrees with or tells Batman or Robin that he’s right.

6. A villain angrily tells another villain to do/not do something.

7. The Riddler or Joker or Penguin laughs.

8. Batman or Robin begin a sentence with an interjection.

10. Drink twice every time someone is dehydrated or rehydrated.

And if your your alcohol tolerance is particularly high: