The surprising evolution of ‘Supergirl’ into a really good show 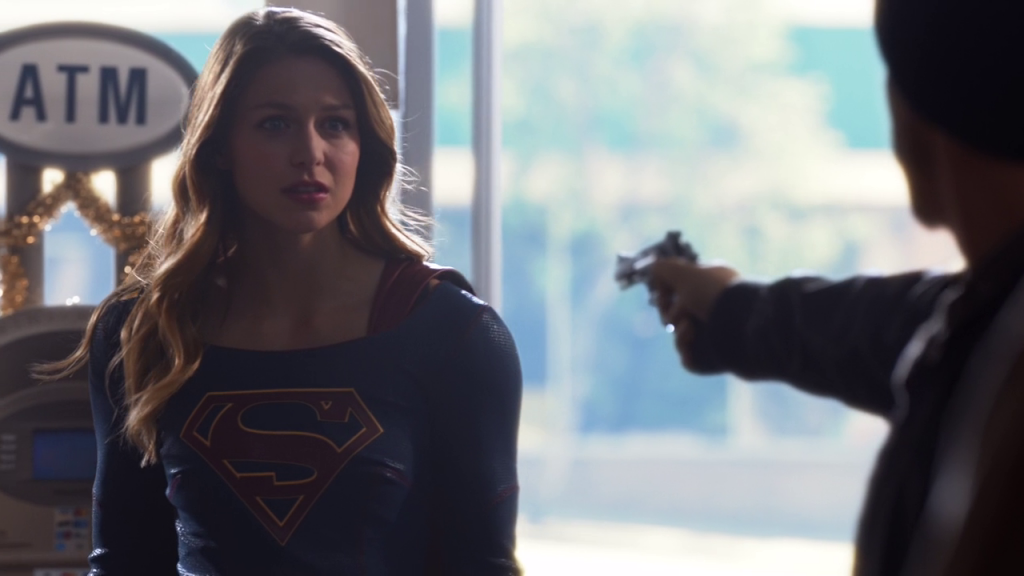 When CBS released its first trailer for Supergirl last spring, the online reaction was less than positive, with a common comparison being to unfavorably note the similarities between CBS’s sincere trailer and a then-recent parody trailer for a fake Black Widow movie by SNL. As someone who has spent a considerable amount of time on the current boom of superhero television, I went into Supergirl fully expecting a misfire of a show that I’d end up dropping after a few episodes.

And yet here we are, with the network TV superhero shows mostly entering their stretch run of the season, and Supergirl is the superhero show I usually look forward to the most.

This realization surprised me, largely because of how very gradually it happened. The pilot was much better than its first trailer had done justice, but it was still nothing that blew me away. I was hooked enough to keep going a while longer, but not sold that would remain the case. For weeks, that same trend continued. Without me fully even realizing it, the show kept growing on me more and more. Cast chemistry improved. Characters whom I initially disliked — most notably Cat Grant — got more interesting and enjoyable. Bit by bit, the show found its legs.

I think I first realized how much better things had gotten while watching episode six, “Red Faced.” The episode, quite rightly, got mocked for its terrible design of awesome comic book character Red Tornado. Look at this shit: 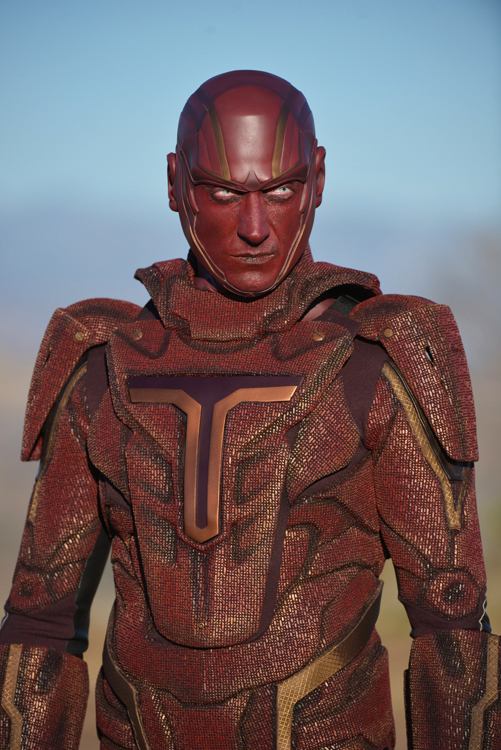 And yet, that issue aside, “Red Faced” featured a couple of impressively poignant moments. The first came during a workout conversation between Kara and Jimmy Olsen, a character who has gone from a boilerplate handsome love interest to an indispensable supporting character. The pair discussed anger, and how both women (Kara) and black men (Jimmy) can’t feel free to openly express their anger in society. It was a brief but deep window into a very real social issue. Moreover, with the exception of Agent Carter, you’d be hard-pressed to find another of the network superhero shows tackling a topic like that. The second moment came in the episode’s climax, as Kara finally got to unleash her rage. I suddenly realized I had goosebumps on my arms and began to appreciate the degree to which this show could give me chills.

The next episode, “Human for a Day,” featured even bigger moments. Kara talked down a desperate gunman without needing her powers, a scene that will surely rank among the season’s best and invoked favorable comparisons to a famous page from Grant Morrison and Frank Quitely’s acclaimed All-Star Superman comic that encapsulated much of what makes Superman, at his best, such a hero: 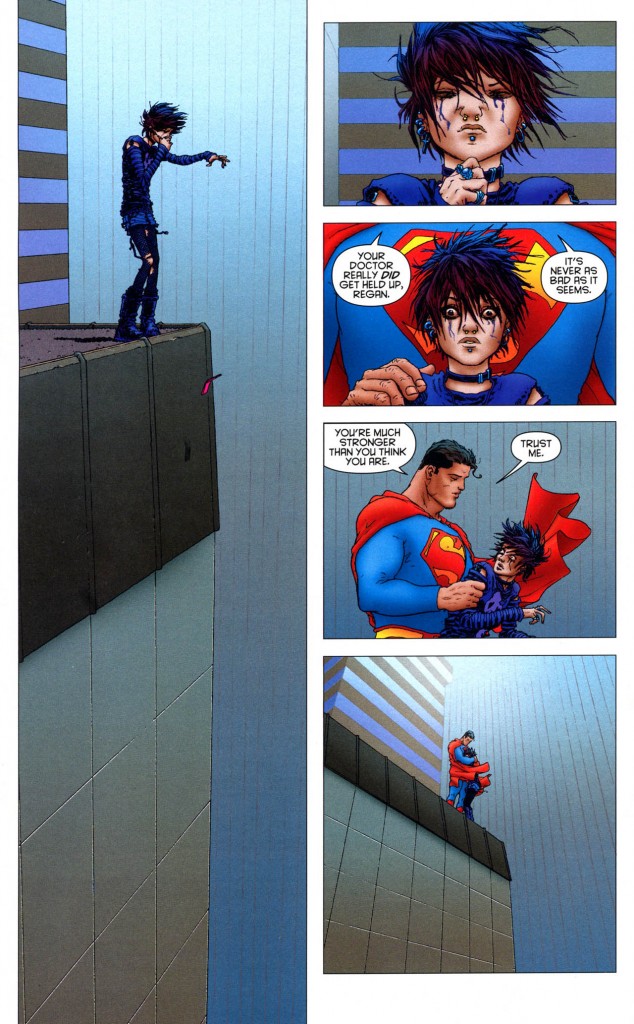 Now, Kara had gotten her own similar moment. She wasn’t the same type of hero we’ve seen on the likes of Arrow or Daredevil; she was even more public and inspiring than we’ve seen from The Flash. (And speaking of Flash, Grant Gustin’s Barry Allen will be making a guest appearance for one of TV’s rarer events, a cross-network crossover.) This version of Supergirl had an opportunity to be something we’ve only rarely seen done well on TV: a powerful symbol. At the episode’s end, we got a more outwardly jaw-dropping moment as the show gave a major twist to one of its principal characters. The next week’s fall finale, “Hostile Takeover,” gave us more of both character moments and exciting action, managing to cement the show’s ascent into a top-tier series among superhero television.

Since then, the show has continued a strong string of episodes, introducing or developing an intriguing rogues’ gallery. Early on, the show gave Kara her own pseudo-Lex Luthor, introducing Maxwell Lord to play the requisite part of rich genius with dangerous plots. Lord did little for me at first, but like the rest of the show, has only grown on me as time and episodes pass. This spring has also introduced a Bizarro Supergirl and, most excitingly, her own version of Brainiac with the character Indigo (something I advocated for recently, not really expecting it to happen). It even adapated its own version of one of the most celebrated Superman comics, Alan Moore’s “For the Man Who Has Everything” (titled in the show, unsurprisingly, “For the Girl Who Has Everything”). Superman still gets mentioned on the show, but as Supergirl becomes more confident, the awkwardness of his absence is less of an issue. This Supergirl has taken on many of the aspects of Superman at his best, yet she’s more than just a gender-switched Clark Kent, despite how it felt early in the season. Kara has grown toward being a much more Buffy-like character, that combination of strength and vulnerability that shows so rarely write well for female characters.

Much of the credit for Kara’s growth, of course, belongs to her actress, Melissa Benoist. Benoist has been absolutely wonderful: funny, emotional, and powerful as needed. She’s developed good chemistry with her on-screen adopted sister, Chyler Leigh’s Alex, as well as Mehcad Brooks’ Jimmy, David Harewood’s Hank (who was particularly powerful in “Strange Visitor from Another Planet”), and, to a slightly lesser extent, Jeremy Jordan’s Winn. But as mentioned, it was Calista Flockhart’s Cat Grant who took the biggest leap for me. After at first finding her an annoying stereotype of a bitchy powerful woman, I soon came to really appreciate Cat as the show thankfully added layers of depth. 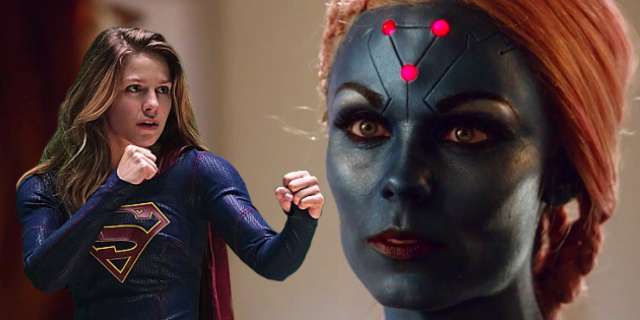 It’s not that the show is flawless now, by any means. The writing still tilts toward melodrama and tropes, and will often take a step back right after taking a couple forward. I still hesitate slightly to call it great and would have a harder time calling it must-see, though I think it could reach both by the season’s end.

But what Supergirl has undeniably become is fun. Much in the same ways that The Flash made its ascent to my top superhero show last year, Supergirl has an increasing chance to claim this year’s top honor by embracing the unique features that make its lead hero so great, while steadily fleshing out everyone around her. And now, the new superhero show I most expected to not watch has turned into the one I never want to miss.