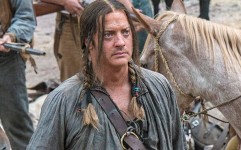 Increasingly, TV casts are trumping the casts of even the biggest blockbuster movies (non-Marvel division). Strip away all the bullshit (and glorious) philosophizing, and True Detective‘s first season was essentially a dark and murky playground for Woody Harrelson and Matthew McConaughey to play in. Game of Thrones is Shakespeare with the finest British … Get hard

Before even watching an episode, Constantine has a lot of baggage. He’s a wildly popular comic book character that has already been royally screwed up, by being made into a Keanu Reeves movie. Not many movies made after 2000 can boast surviving that curse. Also, most nuggets about the show’s … Get hard