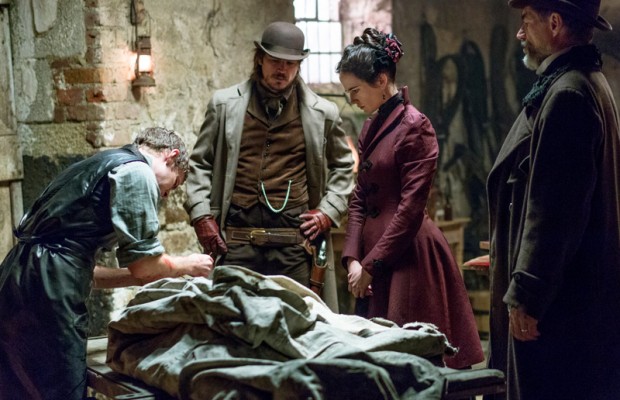 Showtime, as has become its penchant, has released the pilot of PENNY DREADFUL for all to see, a couple weeks in advance of its premiere date (the show airs Sundays at 9 PM, beginning on May 11th). The following analysis contains A BOATLOAD OF SPOILERS FOR THE PILOT, so consider yourself warned, as we delve into the demimonde, the place in the shadows, a world inbetween what we see and what we fear, or the setting in which much of PENNY DREADFUL takes place.

PENNY DREADFUL is dripping with pedigree. The series is created by John Logan, the screenwriter of THE AVIATOR, GLADIATOR, THE LAST SAMURAI, HUGO and SKYFALL, with Sam Mendes (SKYFALL, AMERICAN BEAUTY) on board to produce. The pilot and several subsequent episodes are directed by J.A. Bayona (THE IMPOSSIBLE, THE ORPHANAGE and will be tackling WORLD WAR Z 2). And the material that Logan and company are plumbing is even more star-studded, as PENNY DREADFUL seeks to be a dark mishmash of all the great gothic horror literature. Bram Stoker’s “Dracula.” Robert Louis Stevenson’s “Dr. Jekyll & Mr. Hyde.” Mary Shelley’s “Frankenstein.” Oscar Wilde’s “The Picture of Dorian Gray.”  All these and more have been referenced by Logan and others when news of the project materialized, all likely to be adapted for the bloody, gruesome small screen in some manner.

It’s been so mysterious thus far…but now that the pilot is available, we can begin to see what Logan and company have in store for us.

The horror and genre fan in me loves it…but it all kind of seems familiar, stale, been there-done that. NBC already has/had a DRACULA show. There’s VAMPIRE DIARIES, THE ORIGINALS, THE STRAIN. The American BEING HUMAN just ended, but the British one is still going. Of course, there’s more going on than just vampires in PENNY DREADFUL, and none of those shows might not be done as well or as purdy and stylized as Showtime’s dreary tone. After watching the first episode, this is ONCE UPON A TIME with gothic literature, gifted with an AMERICAN HORROR STORY like vibe where sex and blood is par for the course. This is Alan Moore’s “The League of Extraordinary Gentlemen.”

I was ready to slam this pilot, or at the very least, extoll skepticism that the show will hold my interest, but I realize it already has, thanks to all my speculation about the characters and what’s to come.

Part of the mystery (or the only thing that had me captivated) in the opening episode is figuring out who is who in the convoluted tapestry that John Logan is weaving. The character’s names, before the pilot aired, appeared innocuous, all-new, and not especially linked to the books Logan kept name-dropping in interviews (save Dorian Gray). Was it a ploy to keep guys like me off the trail? Or are the monsters and the heroes going to be bit players, or side characters to the action; is this going to be AGENTS OF H.O.R.R.O.R., creating brand new characters in a well-known world? It appears that it’ll be a little bit of everything, as it’s clear that there are more to these characters than meets the eye, and several are no longer a secret. 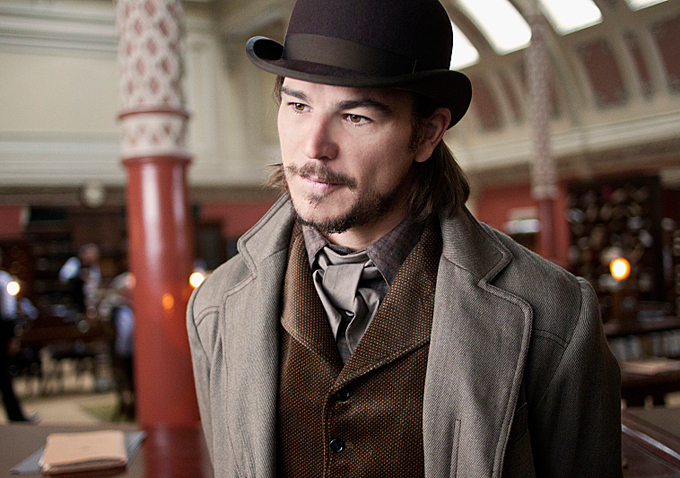 Josh Hartnett plays Ethan Chandler (any time I see the name Chandler, I assume it’s a reference to Raymond Chandler), a con man, an actor, who poses as a swashbuckling, roguish cowboy who survived Custer’s Last Stand, using his tall tale to swindle the charmed Brits. The fact that he uses the term tall tale seems to hint that his true identity may be found in one of them. He certainly doesn’t seem like Paul Bunyan, though Hartnett could totally pull off Babe the Blue Ox. Is he Davy Crockett? Johnny Appleseed? Pecos Bill? Or is he a famous cowboy, a Buffalo Bill? Wild Bill Hickok? Billy the Kid? Another cowboy named Bill? Vanessa Ives claims that there’s more to him than he puts out there.

Ethan is our entry to the story, as he’s approached by Vanessa Ives (Eva Green) to help her and her employer (Malcolm) with some “night work” (the name of the pilot), which naturally involves killing monsters. 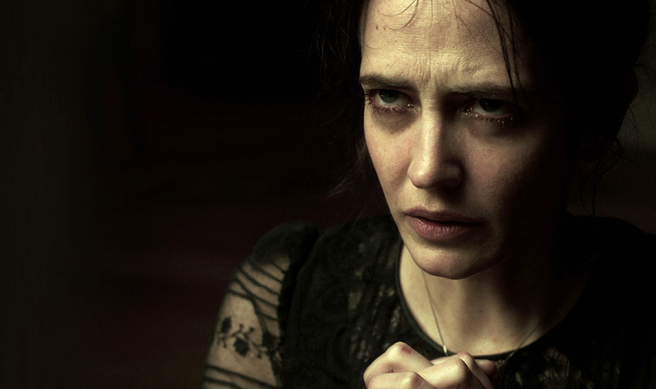 Who exactly is Vanessa Ives? She’s seen worshipping to a cross several times, having an unhealthy relationship with spiders, whether she summons them, or they just hate her prayers. She’s a fortune teller, a spiritualist, the kind of lady who will totally tell you to pick a Tarot card from her deck. I got nothing on her right now, though I’m sure it’s staring me right in the face. Anyone have any theories? I want her to be the crazy gypsy woman from WOLF MAN, but that isn’t right. 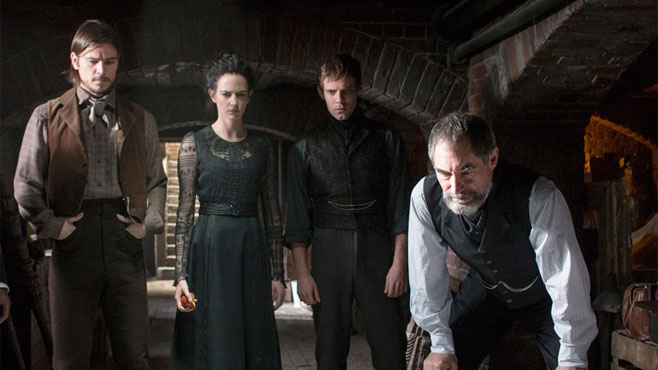 Timothy Dalton is great as Sir Malcolm, a wealthy explorer searching for his daughter, who’s been kidnapped by blood-cursed beasts. Can we call a spade a spade here and just admit they’re vampires? It’s unfortunate that vampires are the biggest focus in the first episode, since we’re about running out of new ground in that particular mythos. It’s clear, even before we learn that Malcolm’s full name is Malcolm Murray, that his daughter is Mina, or Mina Murray/Harker, Dracula’s biggest infatuation. More interesting is that they present Sir Malcolm as an explorer of Africa who’s lived untold adventures and happened upon a myriad of secrets. He certainly has shades of H. Rider Haggard’s Allan Quatermain, the star of “King Solomon’s Mines,” a book that is credited with creating the “Lost World” genre. Quatermain is the godfather of Indiana Jones and whatever Noah Wyle played on TNT. 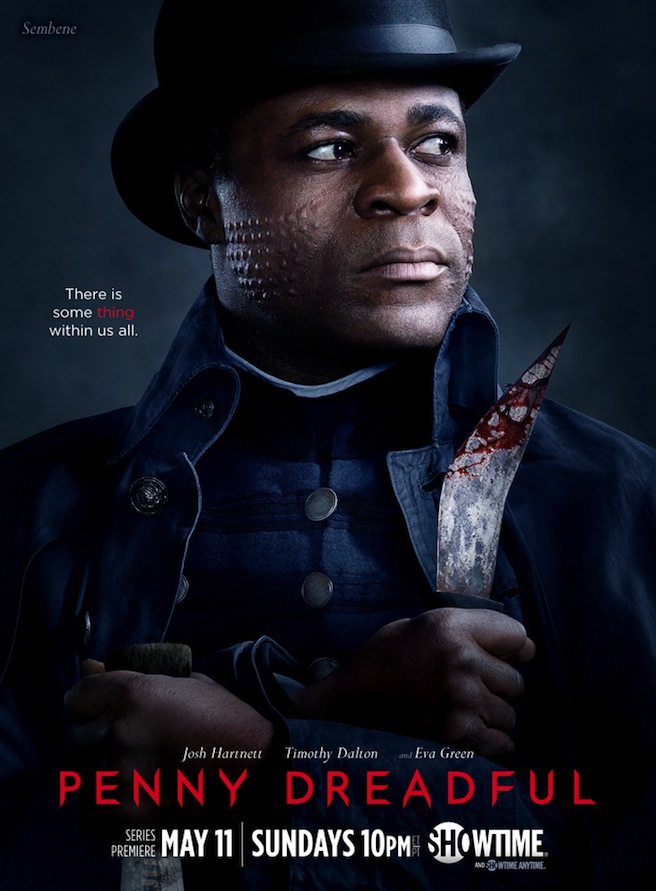 Considering Malcolm has a servant named Sembene, who’s clearly from “the dark continent,” (their words, not mine), it’s likely Sembene was found/rescued during his travels in Africa. I’m not overly familiar with Haggard’s novels, but I’m sure they’re filled with potential characters he may be (Umslopogaas? Ignosi?). Ousmane Sembene is a notable African filmmaker from the independence era, which certainly doesn’t seem like an accident, and indicates that Malcolm/Quatermain perhaps freed Sembene from slavery.

After Malcolm, Vanessa and Ethan traipse around, stumbling upon a vampire nest, they bring a body to a doctor, a man singularly consumed with life and death. It doesn’t take a genius to realize we’re seeing a young Dr. Frankenstein (Harry Treadaway), even before his identity is revealed (you’ll be screaming at the screen long before he says his name). He isn’t interested in any other avenue of science, blinded by arrogance and purpose. Malcolm wants to hire the Doctor for their quest to find Mina, but even though Victor’s clearly in need of the money, he doesn’t want to dilly dally with anything else but his experiments. 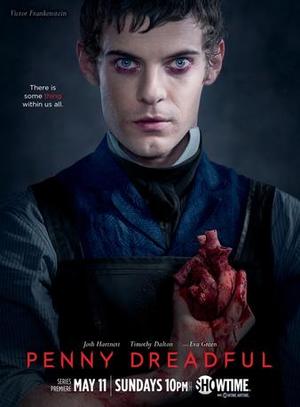 Which happen to bear fruit by the end of the episode, as we see Logan and company’s version of the “It’s Alive!” scene, which is thankfully a lot different (and effective). In Mary Shelley’s classic novel, once Victor achieves his goal, he’s terrified of the demon he created, and runs away from the Monster. Then he realizes he must kill him, and consumed by madness, travels around the globe to try and catch him. The Monster, despite his ugly features, is an eloquent figure, abandoned by his father, and seeking a place in an unjust and mysterious universe, only wreaking terror and death because Victor kind of deserves it for being a self-absorbed ninny. In PENNY DREADFUL, the two wonder at each other…the Creature (Rory Kinnear) not particularly big or imposing, both of them touching the other’s face. There’s certainly sexual vibes going on (was he a lover of Victor’s before he died?).

In the waning moments of the pilot, Malcolm is greeted by the presence of his dear daughter, Mina (Olivia Llewellyn), who it appears, is no longer human. She’s been turned, which, while tragic news to Malcolm, is good news for us as an audience, because we don’t have to go through that storyline again. More interestingly, Malcolm and Vanessa have committed some transgression that led to Mina’s condition, a guilt that they’ll always have.

While the vampire stuff is mostly pat…Dr. Frankenstein unearths an interesting wrinkle, when he splits open a dead vamp’s exoskeleton, revealing hieroglyphics tattooed to the man’s skin. Malcolm and Vanessa go see a Mr. Lyle, an eccentric Egyptian scholar at the British Museum, who reveals that the tattoos indicate the man has a “blood curse,” and that the images come from the Book of the Dead. Of course it does. To the best of my knowledge there is no Mr. Lyle in any of the Universal Mummy films, but I do like that everything seems to come from Africa, and are related to one of Malcolm’s expeditions.

Oh, and because it wouldn’t be London in the 19th century without him, it appears that Jack the Ripper is back, having butchered a woman into all kinds of pieces. Is Jack the Ripper a vampire, or something else (Dr. JACK-yll and Mr. Hyde)? Or is Jack just back from a holiday? Or is it Dracula/some vampire, doing the murders, and it just looks like Jack the Ripper? Considering how much blood was left at the scene of the crime, it certainly doesn’t feel like vampires.

So after one episode: we got vampires, Mina Murray with the promise of Dracula to come, some version of Jack the Ripper, Dr. Frankenstein and his “Creature” (not his Monster), and an Allan Quatermain stand-in. We haven’t even been introduced to Dorian Gray (Reeve Carney), though he’s coming.

PENNY DREADFUL’s pilot wasn’t terrific, but it obviously had a ton of elements and seeds, and depending on how they’re teased out, and blossom over its first season, it may very well prove that vampires, monsters and the like aren’t so dead after all. Plus, we haven’t even met Billie Piper’s Brona Croft (an irish immigrant trying to escape her dark past), with even more puzzles to come.