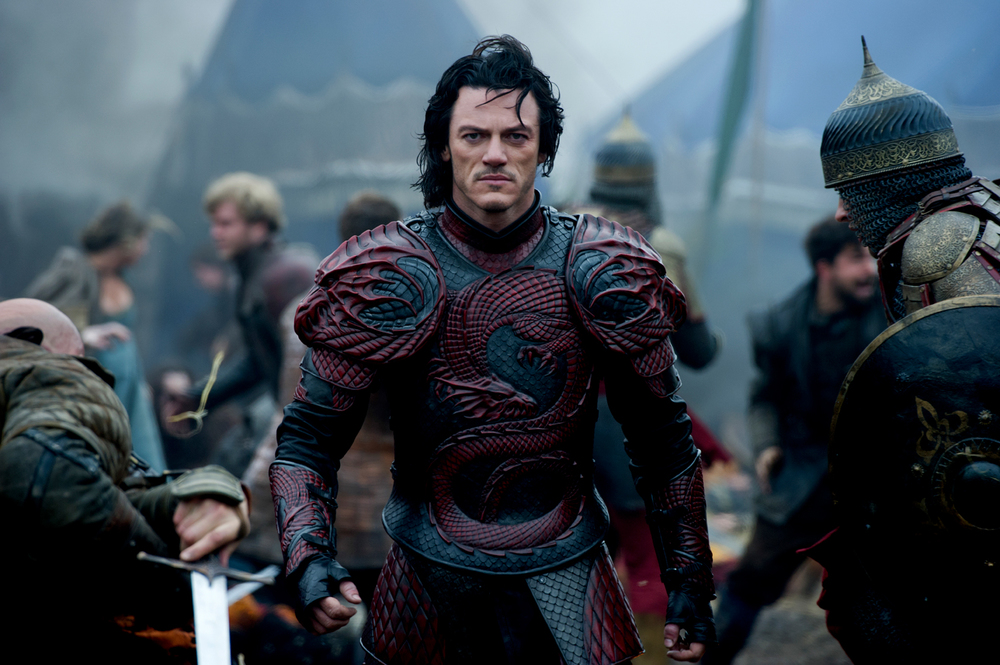 Now it’s time for Legendary Pictures and less than thrilling analysis, because I’m just trying to catch up, and wrap my head around the insanity.

The guide doesn’t reveal the slate, and with Godzilla, 300: Rise of An Empire in the rearview window…what does Legendary have upcoming? The internet has answers: Crimson Peak and Dracula Untold. Considering we already saw Benedict Cumberbatch and Luke Evans in Hall H, that seems like a safe bet. It’s probably way too early for Pacific Rim 2, but Guillermo be crazy.

Well, Legendary Pictures wins. Not only do they announce Godzilla 2, with Gareth Edwards directing, after he does his romp in Star Wars. That’s not all: in a behind the scenes clip from Monarch, we learn the existence of three more kaiju: MOTHRA, RODAN and KING GHIDORAH. YES. Thank you Toho. I wonder if Bryan Cranston will play one of Ghidorah’s heads.

Afterwards, we get a trailer for As Above, So Below, a found-footage Indiana Jones style movie set in Paris’ catacombs, according to the directing duo brothers. Um, whatever.

Next up is Michael Mann’s first visit to Comic-Con ever for his next film, Blackhat. It be about hackers, yo. It also looks like every movie ever made (hackers have your information…!), judging by the trailer. It appears exceedingly unremarkable, except for the fact that Thor plays a genius hacker. Um, yeah, that might work. It’s worth it just because Chris Hemsworth shows up now to join the panel. He learned how to type correctly for the role, showcasing his range as an actor. They shot the film in 66 days, which is a fact that is never interesting. Apparently the basis of Chris’ character, hacked the system and created a profile to make himself the ideal date for 35 women. Moderator Jessica Chabot correctly comments that he’s rapey.

Unless they’re announcing Namor the Sub Mariner (there was a pointed comment about Universal and Legendary’s combo), I feel like Legendary shot their load, maybe prematurely. Of course, we haven’t even seen either of my other predictions. Because my predictions suck.

Yay, Guillermo del Toro is coming on stage for Crimson Peak. It’s R-rated gotham romance, that is very violent. Guillermo del Toro swears all over the place, and he rules. He promises Tom Hiddleston will be around next year, and is nice and sexy.

Promotes brutal violence, a story with a woman lead that isn’t about getting a guy (fuck that shit, del Toro says).

del Toro finishes the panel by asking the audience: Hellboy 3? Awesome response. At the Mountains of Madness? Enthusiastic response, but not as big as Hellboy 3, which is semi-disappointing; we want H.P. Lovecraft and Cthulhu, people. Educate yourself. Legendary is listening. Perhaps both are coming.

Next up is Blizzard Entertainment and Legendary’s….Warcraft. Duncan Jones, the director, arrives on stage. Wants to show how the world falls into conflict between orcs and humans on Azoroth.

The movie is coming in March 2016, and Duncan compares world building to Lord of the Rings and technology to Avatar. The sneak peek looks pretty cool, though I’m exactly the wrong audience for it.

Tull returns to promise that he’ll talk with Guillermo after Pacific Rim 2…and also has something else kicking around:

Skull Island. We see a stormy sea, the Skull island, and a massive ape pounding his chest and roaring. Yup: King Kong is coming back, folks. Um, Legendary came to play this year.