GET OFF MY PLANE EDITION. As far as I’m concerned, this list should really only be two entries long. But I’ll attempt to come up with a few fictional movie heads of state that also deserve recognition.

Before I begin, I just want to clarify: this isn’t a list of portrayals of actual presidents in films. You’re not going to see Daniel Day-Lewis’ Abraham Lincoln or Frank Langella’s Richard Nixon, or the 53 actors who have played JFK. These are all fake presidents, which should be abundantly clear.

This is specifically for MOVIE presidents. Fictional TV presidents would be an entirely different list, but if you must know, it would have Martin Sheen’s President Bartlet at #2, AFTER Laura Roslin of BATTLESTAR GALACTICA, because I’m the worst. David Palmer of 24/Allstate would be 3rd place. 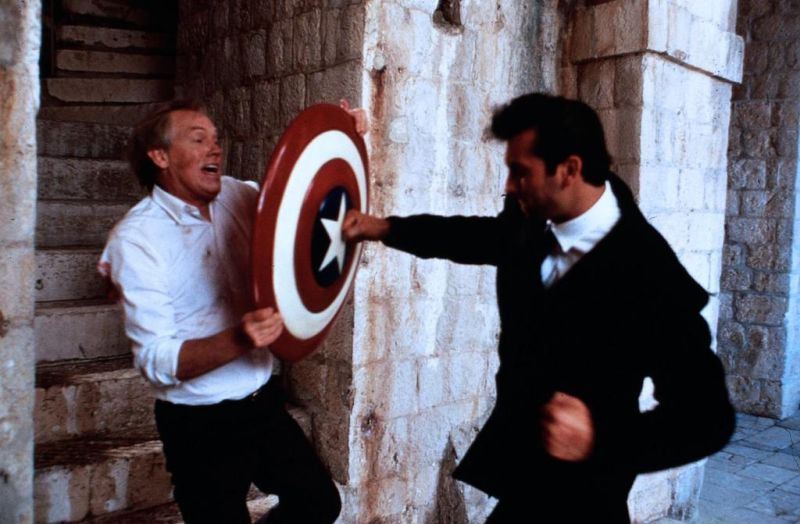 Many old men in Hollywood have practically made a career of playing the POTUS. If you’re a grizzled character actor with a nice clump of white hair and you ooze authority, you’ve likely played the thankless role of a president in a film.

TRIVIA TO IMPRESS YOUR FRIENDS: Jeff and Beau Bridges aren’t the coolest sibling duo who have both played presidents. That award goes to Dennis and Randy Quaid. Dennis for AMERICAN DREAMZ… 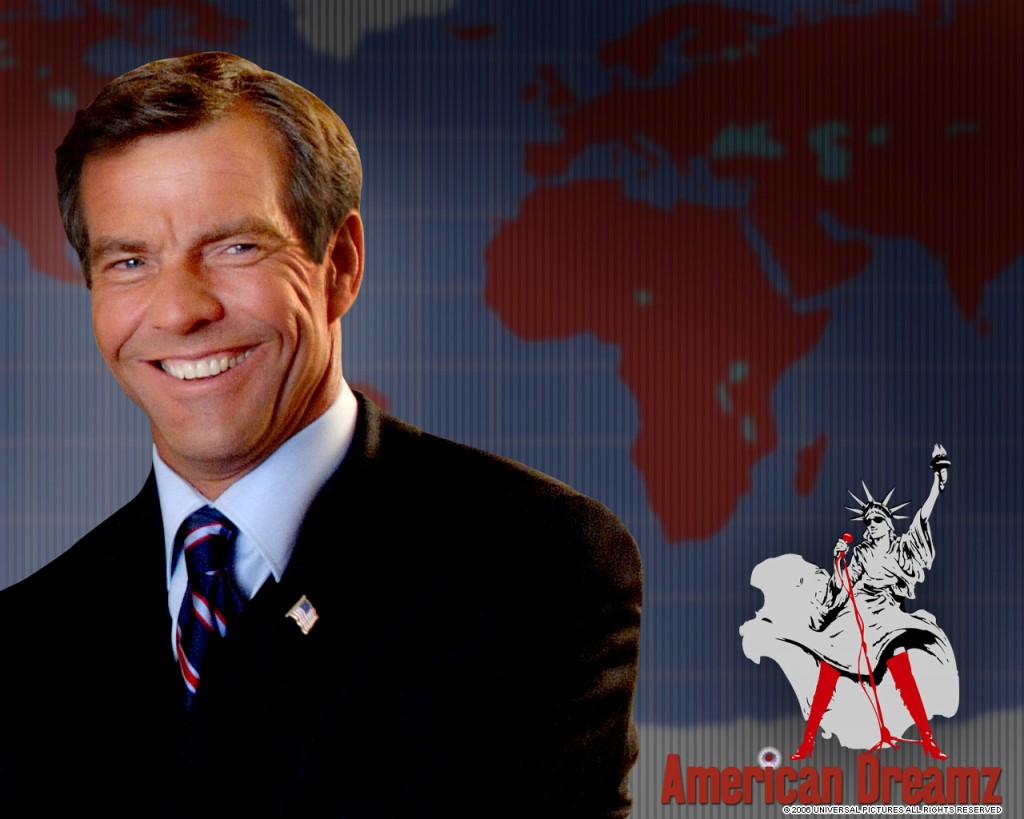 Whereas Randy Quaid had the country in the palm of his hands in the classic MAIL TO THE CHIEF. The movie came out in 2000, six years before Dennis ever sniffed the oval office. 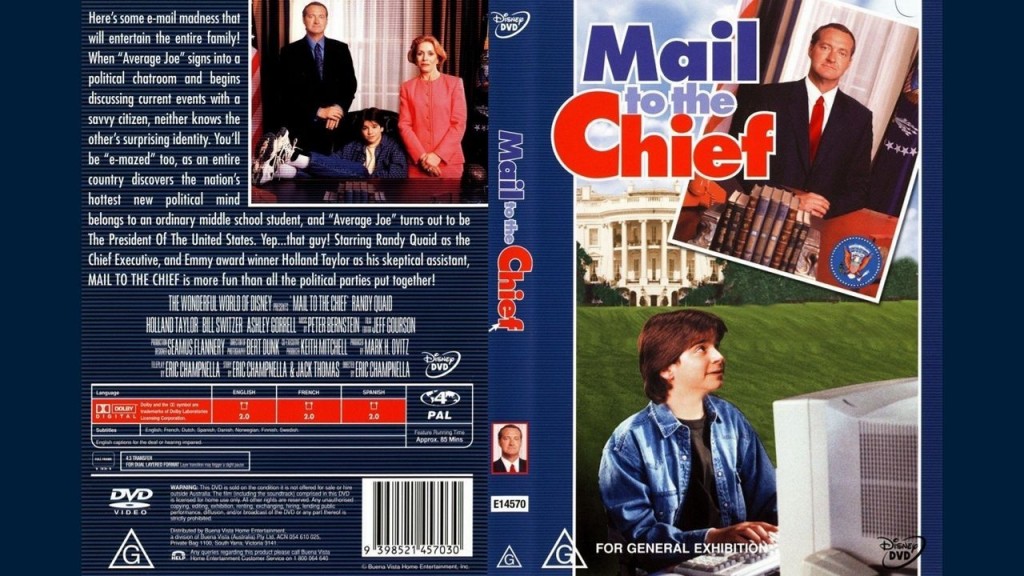 14 years ago, Randy Quaid was playing the President in Disney movies and I thought I’d play for the Kentucky basketball team. Life’s weird. Speaking of…

…Charlie Sheen was the President in MACHETE KILLS.

Eric Roberts was the head of state in FIRST DOG. I don’t want to look that movie up to shatter the illusion of what it is in my head (AIR BUD + White House). 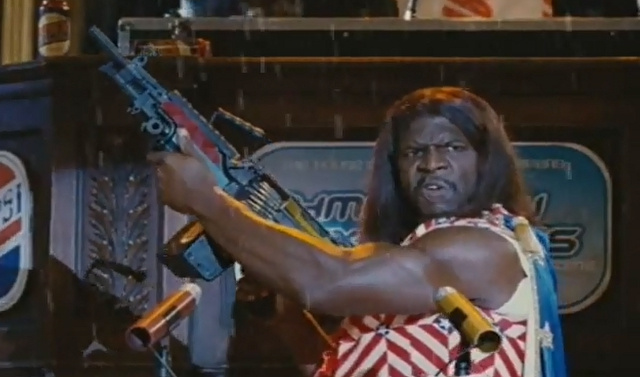 Terry Crews was the President in IDIOCRACY. His name was Dwayne Elizondo Mountain Dew Herbert Camacho.

Robert Rodriguez’s SPY KIDS movies didn’t fuck around. In the second film, Shooter McGavin himself played the President. Then they took a step down in SPY KIDS 3-D, opting for a little guy named George Clooney: 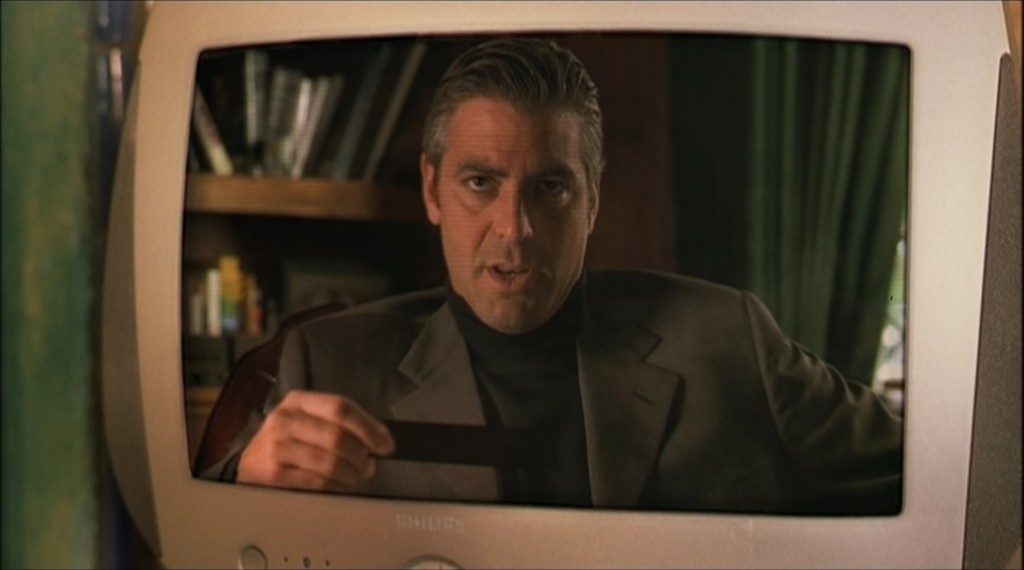 Lame. Far superior was the fake but judicious U.S. population who elected Jack Nicholson to the White House, right before the world became under siege by aliens in MARS ATTACKS!

Is Jack not exactly who we want making the all-important decisions for our country?

PRESIDENT THAT WON’T SNIFF MY BALLOT: 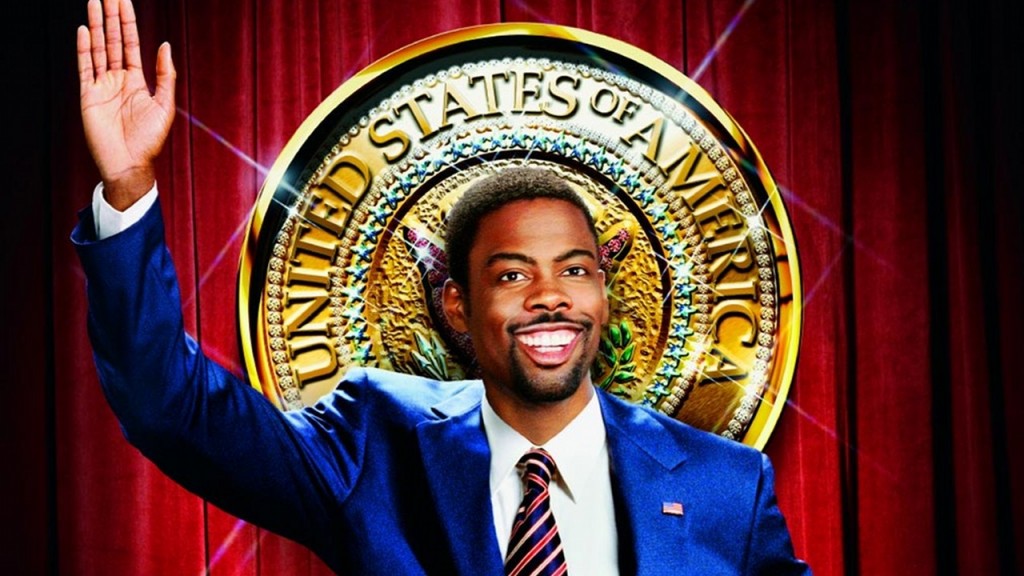 Chris Rock as Mays Gilliam in HEAD OF STATE (2003). I just hate this movie. Maybe I’m just mad that I actually paid to see this one in theaters.

HANGING CHADS/SNUBS (in no particular order): 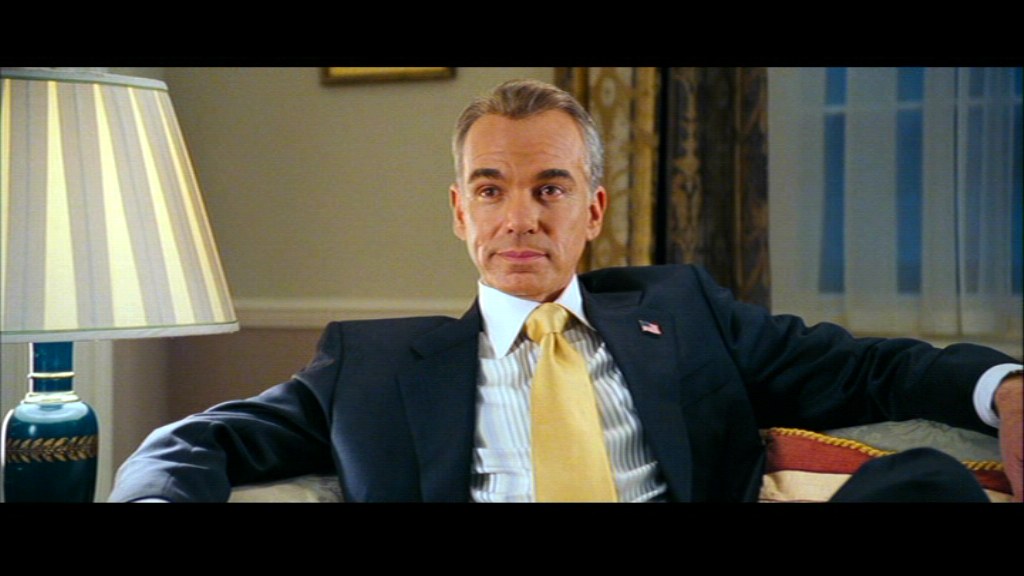 Billy Bob Thornton exudes sleaze and a stinky odor that can only be described as pure, unadulterated America in the brilliant British romcom. It’s a master stroke of casting, as arrogance and charm seep out of Billy Bob’s pores in this small role. He’s inappropriate with Hugh Grant/the Prime Minister’s squeeze, he’s a bully, presumably a philandering alcoholic, and he’s exactly what the Brits and the rest of the world think of American politicians. And they’re probably right.

I’d still vote for Billy Bob Thornton in a heartbeat.

James Earl Jones delivered the first depiction of a black president in THE MAN (1972), although Sammy Davis Jr. dreamed of being the black president as a 7 year old in RUFUS JONES FOR PRESIDENT (1933). You could make a convincing argument that 24, DEEP IMPACT and other pop culture entries featuring black actors as the President paved the way for Barack Obama. It shouldn’t have required that, but Morgan Freeman’s portrayal in DEEP IMPACT might be one of the most influential of its kind. It doesn’t get any more regal, comforting, stately and presidential than “The Voice.”

Like in life, when everything seems lost, or when humanity is on the brink, we need heroes the most. Or at least, that’s what the movies teach us, and in DEEP IMPACT, a comet could destroy the planet. Leave it to Morgan Freeman and his voice to soothe our worries, and lead the way. 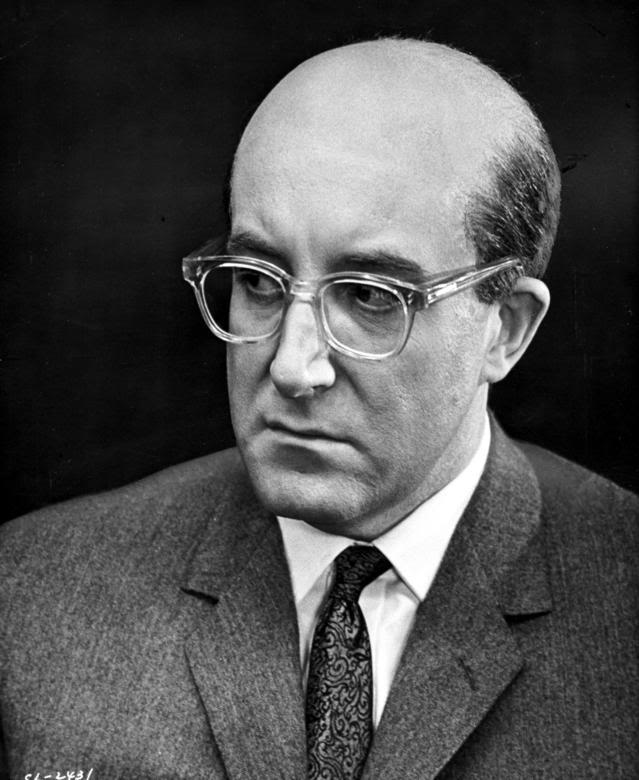 In Stanley Kubrick’s hilarious black comedy about the Cold War, nuclear paranoia and the folly of politics, Peter Sellers gets a new high score. He plays three of the main characters, including the titular Dr. Strangelove, a maniacal mad-scientist role that overshadows his Captain Mandrake and…the President.

In DR. STRANGELOVE, Sellers’ President is shocked to discover that the U.S. has ordered a nuclear attack on the Soviet Union, without his permission. He finds himself in an impossible situation, amid a sea of incompetent and unruly advisers in the war room, while not exactly the brightest man himself.

Here are two classic scenes from the movie, though it’s one of those movies where every scene is famous: 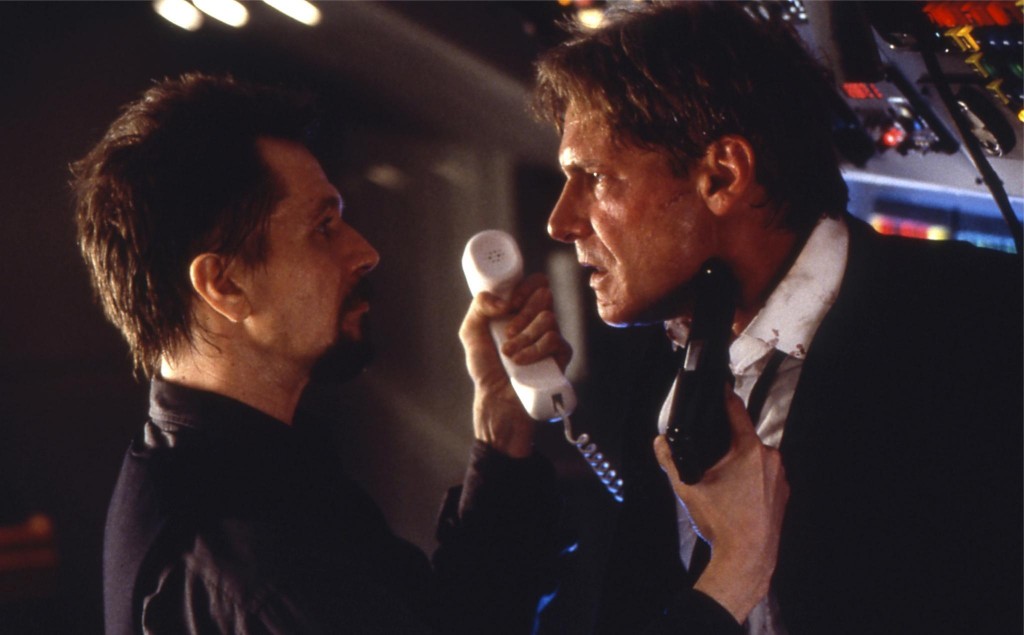 In the 1990’s, we wanted a President who could kick ass and murder with the best of them. Leave it to Harrison Ford to bring the badass to the Oval Office, as he turns the President (an ex-soldier) into a 90’s action hero in Wolfgang Peterson’s AIR FORCE ONE. It’s honestly one of Ford’s best roles, as he takes down a malicious Gary Oldman and his ring of terrorists WHILE IN FLIGHT. He also delivers arguably the best line from a Fictional Movie President, in a way that only Ford could:

This list will not go quietly into the night…

There are no words, especially when Bill Pullman stole them all, in probably the greatest movie speech ever:

All of the goosebumps. 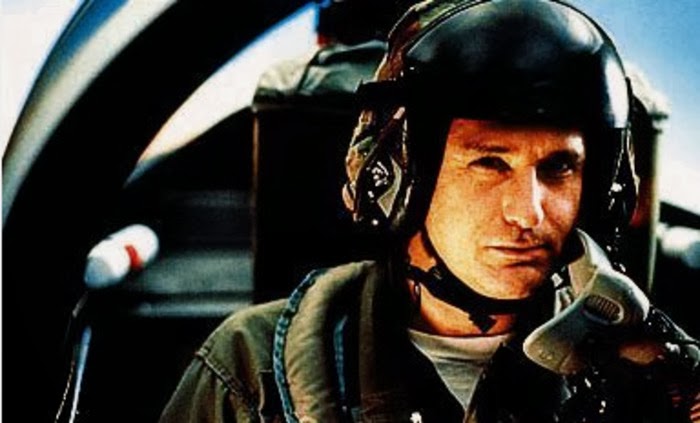