My 10 Most Anticipated Sci-fi/Fantasy Movies of 2015

The indispensable website io9 has compiled a list of 67 Science Fiction and Fantasy Movies being released in 2015. The entire list is well worth your perusal, but what if you just want to read one man’s subjective list of which of those movies he’s most excited for? Then you’ve comes to the right place!

For my excitement levels, I have a predictable top two, a few more I feel pretty good about, and then just a whole mess of possibly interesting projects that I can still see going either way. Some of those that are still further out are even harder to evaluate without at least a trailer for guidance, but I’ll give it a go anyway. Let’s start with some of the noteworthy films that didn’t make my Top 10.

Kingsman: The Secret Service (Feb. 13): The trailer is fun, and the movie is probably worth it just to see Colin Firth doing Colin Firth-y things. It’s based on a story by Mark Millar, though, so expect very one-dimensional characters.

Hot Tub Time Machine 2 (Feb. 20): I can’t help but vaguely admire this franchise for owning, even basking, in its stupidity; the first one managed most of its humor by doing so. I can’t help feeling like it probably won’t succeed a second time.

Chappie (March 6): I guess I’m the guy who just can’t muster any excitement for Neill Blomkamp’s schtick of, “Look at me, I’m making obvious points about society but using SCI-FI!” This will probably be good for most people, but I just don’t care.

Cinderella (March 13): This is a motion picture that for some reason is happening.

The Water Diviner (April 24): I have a love/hate relationship with Russell Crowe, but some reason I have a really good feeling about this one. I know nothing about it outside of io9’s short blurb, however, so my good feeling is based on practically nothing.

Mad Max: Fury Road (May 15): I’ve never seen any Mad Max film, so the trailer didn’t really do much for me, despite positive reception from most of the internet. It does look visually interesting, but beyond that, all I see is explosions.

Terminator: Genisys (July 1): Lots of people I like in this, plus Jai Courtney. I’m sure I’ll still see this, but this excellent mockery of the screwed-up timelines of the Terminator kind of sums up why my excitement levels just aren’t fully there.

Ant-Man (July 17): Most fans are more concerned about the departure of Edgar Wright, and while that’s certainly still a blow to me, I’m more bothered by turning a founding Avenger into an old man and fridging his wife, who was the better character anyway, as I touched on in my previous incoherent ramblings on the state of the MCU. Obviously, I’ll still see it opening weekend, because Marvel owns me anyway.

Pan (July 24): Watch this trailer. Pause on Hugh Jackman at 0:58. How batshit crazy was that? If Andy hasn’t made a drinking game for this insanity by the end of 2016, then we all (but mostly Andy) have failed.

Fantastic Four (Aug. 7): This is only the second year I’ve ever tried to make a list like this, and this first time I’ve published one, but if I’d been doing them for 15 years, this might be the first time that two major superhero tentpole movies failed to make my Top 10. But if I’d been doing this list for 15 years, I’m also not sure any pre-release quote would have ever killed my buzz faster and more completely than Toby Kebbell’s explanation of his Doctor Doom.

The Jungle Book (Oct. 9): When two dueling Jungle Book movies got put in development, I was initially more interested in the Andy Serkis-helmed one. But that one sounds like it’s in development purgatory, while Jon Favreau’s is on its way with an impressive cast. I’m not sure how well a story that’s heavy on themes of British colonial exploitation will translate today, but we’ll see.

The Martian (Nov. 25): The book this is based on was one of the major hits of 2014, and I definitely have it on my to-read list, though I haven’t decided yet if I want to before or after this movie. This feels like it could be a little rushed (the book was released less than a year ago), and while the cast is superb, director Ridley Scott is a coin flip for quality.

There are plenty of other movies on io9’s list that look worthy of comment, including Predestination, Kitchen Sink, Poltergeist, Victor Frankenstein, the various teen series sequels, and more. But for now, let’s get to my Top 10. 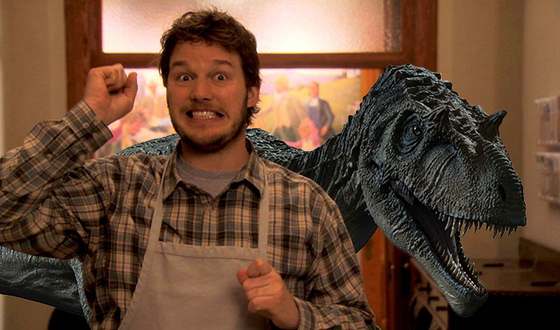 10. Mission Impossible 5 (Dec. 25): This feels like a weak #10, as I’m hardly a devoted fan of the series, but I reached a point where neither it nor the above honorable mentions looked like a very sure thing. But I found Ghost Protocol to be quite enjoyable, and unlike the other contenders for this spot, this movie has Simon Pegg. And the presence of Pegg feels like a damn good tiebreaker.

9. The Good Dinosaur (Nov. 25): Honestly, I know nothing about this beyond the blurb on io9, but the combination of “Pixar” and “dinosaurs” is enough for me.

8. Hunger Games: Mockingjay, Part 2 (Nov. 20): I’m not an uber-fan of this series, as you can probably guess from the mere fact that this isn’t higher. But I do still like it, and enjoyed the first two films enough to be very interested in seeing the end, despite the lackluster third movie.

7. Minions (July 10): I had no expectations for either Despicable Me movie, but found them both to be wonderful surprises. At first I thought the idea of the Minions getting their own film might be two much of a good thing, but the trailer was so very delightful that I’ve changed my tune and am quite happy about this one.

6. Tomorrowland (May 22): Admittedly, the actual description for this is a little hazy/mysterious (as io9 rightly points out, that’s kind of a trademark for something written by Damon Lindelof), but the trailer still has a very magical feel to it. And I love Brad Byrd and am more than willing to give him a leap of faith.

4. Inside Out (June 19): Pixar’s other release this year, we have more to go off of for this one, including a stellar voice cast and an absolutely charming trailer.

3. Spectre (Nov.6): We’re going off io9’s list, and thus including this (and MI:5) despite it being debatable whether they qualify as sci-fi; personally, I agree with their inclusion, as the futuristic spy tech is often indistinguishable from sci-fi. Anyway, while I wasn’t exactly the first person on the bandwagon for Daniel Craig’s James Bond, I did absolutely love, and was thoroughly won over by, Skyfall. Now, the return of SPECTRE and the addition of the great Christoph Waltz has my anticipation levels through the roof.

2. Avengers: Age of Ultron (May 1): I had some misgivings about this too in my Marvel rant, linked above, mostly concern for the likelihood that we’re getting a slightly deranged Scarlet Witch. But otherwise, I can hardly contain my excitement for how superb this looks. It’s going to be amazing to see this wonderful group back together again for what looks like an especially major movie in setting up the future of the MCU.

1. Star Wars Episode VII: The Force Awakens (Dec. 18): While the top two was fairly predictable here, their order wasn’t to me just a short time ago. As I commented on Andy’s excellent Star Wars post from last May 4th, I’ve had an up and down relationship with this franchise. But I hit a clear high again with the teaser trailer released in late November; it was like my inner child was reawakened when that famous score queued up and the Millennium Falcon soared across the sky again. Maybe this will be great and live up to its considerable hype; maybe not. But there is no film I’m more excited for in 2015.