James McAvoy And His Scottish Countrymen Revel In “Filth” 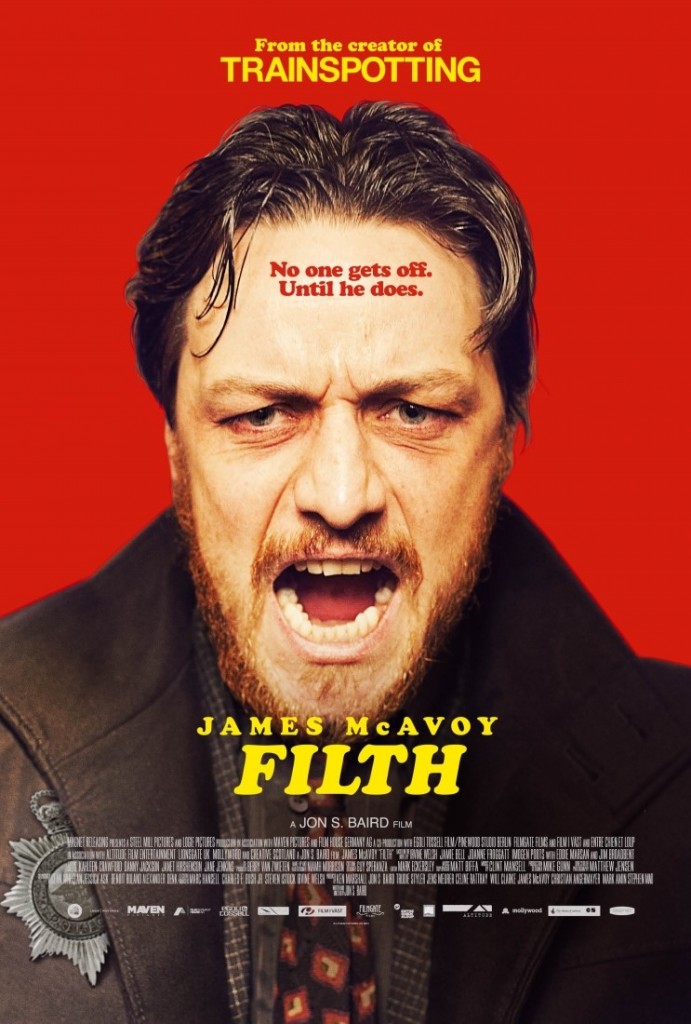 It’s Christmas time in Scotland, and detective sergeant Bruce Robertson is definitely on the naughty list. FILTH is written and directed by Jon S. Baird (CASS), adapting a classic book by Irvine Welsh (TRAINSPOTTING) of the same name. And damn, that title is no mistake, as Baird hurls the audience into a cavalcade of obscenity, without ever wavering.

Bruce is gunning for a promotion and will stop at nothing to get what he wants. Excuse the cliché, but this once, that actually applies, as Bruce launches full-scale into an absurd, twisted Machiavellian game designed to ruin all of his colleagues’ chances at getting the job.

The film opens with Carole (Shauna McDonald of THE DESCENT), Bruce’s wife, all dolled up, in lingerie, talking about how the pair of them keep their relationship spicy, not leaving much to imagination (or is it all our imagination?). She also happens to find herself as the sole witness for a murder, when a bunch of hooligans beat a Japanese exchange student to death in the metro. 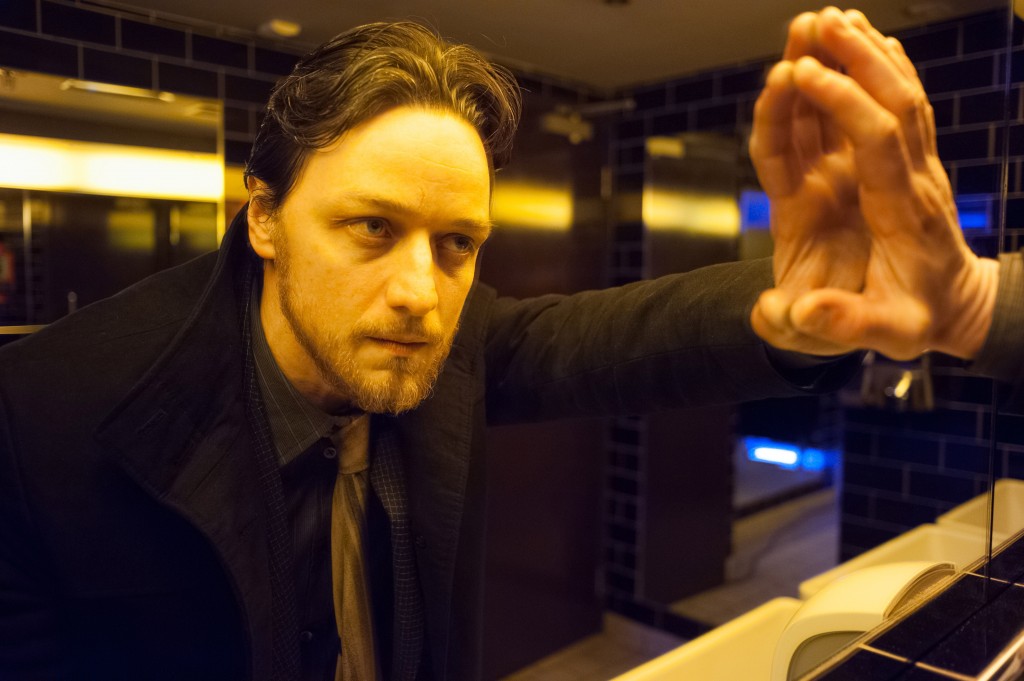 The murder case is dropped on Bruce’s desk, as he takes the lead, given a chance by Chief Inspector (and wannabe screenwriter) Bob Toal (SKINS’ John Sessions) to earn the potential promotion. From there, Bruce unfurls a slew of disturbing and cruel machinations to get the job: he feeds into rookie cop Ray Lennox’s (Jamie Bell) lust for cocaine and women, while manipulating the chain of command, because Ray looks up to him. He’s shtupping Dougie Gillman’s (Brian McCardie) wife. He’s casting aspersions around the force and tricking the simple minded Gus Bain (Gary Lewis) into distrusting everyone else. He sexually harasses and demeans Amanda Drummond (Imogen Poots of NEED FOR SPEED) relentlessly. Bruce casts Peter Inglis (Emun Elliott) as a homosexual because that disturbs the old school Bob Toal, engaging in lecherous means to do so.

He’s also robbing and conning poor Bladesy (the lovable Eddie Marsan of THE WORLD’S END), a hapless but rich man who thinks Bruce is his best friend. Bladesy can’t please or protect his wife Bunty (Moaning Myrtle herself, Shirley Henderson), who’s disturbed by a sexually charged prank caller. Of course, that prank caller is Bruce. 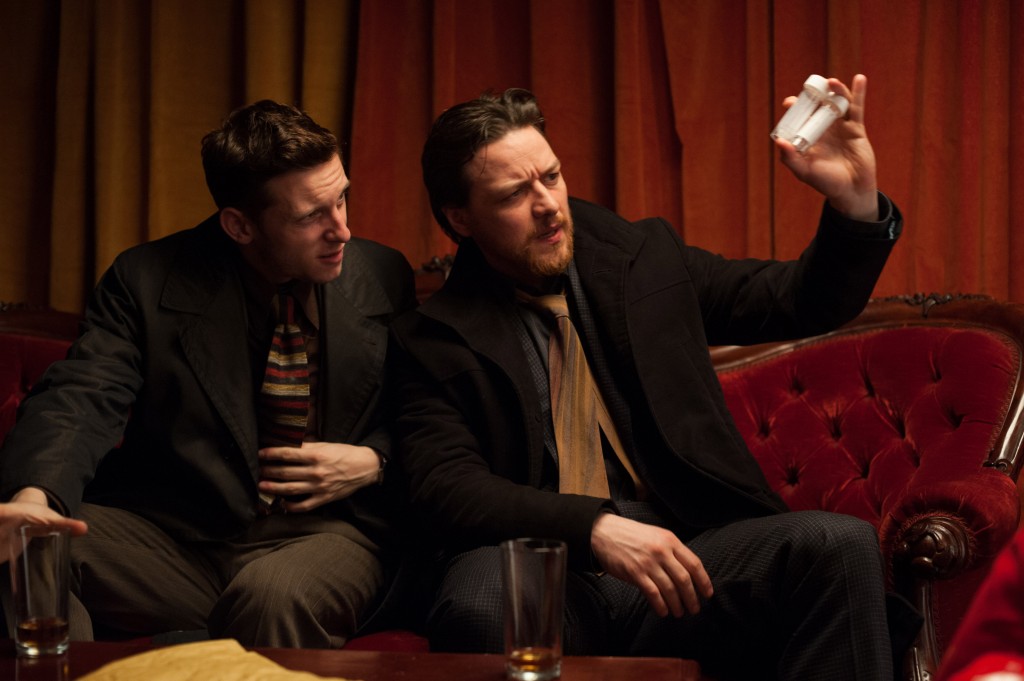 Bruce juggles it all, along with an endless supply of pills, coke, booze, hookers and lies, and James McAvoy unapologetically dives into it all, like Scrooge McDuck into a cesspool of suck, going down the rabbit hole of FILTH with glee. It’s a tremendous performance, particularly when we realize: something’s wrong with Bruce. Not just morally, but physiologically speaking. While he’s a drug addict, an alcoholic, racist, rapist, bigot, sexist, and all of the bad things one can be (he’d win the GAME OF THRONES), he’s also clearly deeply disturbed, thanks to an increasingly debilitating bipolar disorder that attacks at his brain almost as often as he lashes out at other people. His psychosis is rooted in a traumatic childhood event involving his younger brother Davey, who continually haunts him throughout the film. Davey isn’t the only disturbing hallucination Bruce has: FILTH is peppered with human-animal transmogrifications, as Bruce begins to see himself as a pig (fitting for a jerk, even more fitting for a cop), and everyone else as other horrifying and jarring animals. Bruce is also attacked by a mad-scientist, massive forehead version of his psychologist Dr. Rossi (the wonderfully over the top Jim Broadbent) and a malignant tapeworm, a plot device lifted directly from the novel.

FILTH is bonkers, like its lead character, but it somehow manages to, if not empathize, but understand (or stomach) Bruce, and make us root for him to snap out of it, to grab onto any tendrils of human kindness that he has left, before it’s too late. The only time Bruce shows any shades of decency, is in the presence of recently widowed Mary (DOWNTON ABBEY’s Joanne Froggatt) and her young child. Bruce tried and failed to resuscitate Mary’s husband, but Mary is overwhelmingly grateful to him for trying, while everyone else watched as he died. While there’s an uncomfortable tension seething through their scenes (is Bruce going to try and sleep with her too?), I actually think it’s there because Mary and her son reminds Bruce of his family, and of the ghosts in his past, or at least that’s what I want to believe, as Jon S. Baird manages to add more than just the superficial layer of misogyny to the proceedings.

It’s obvious that there is more going on in the highly stylized, sexualized visions of Carole that we see, always pontificating about their passionate and happy marriage, because we never actually see Bruce and his family together (and it’s Christmas!), despite his impatient insistence to his comrades that they’re happy. 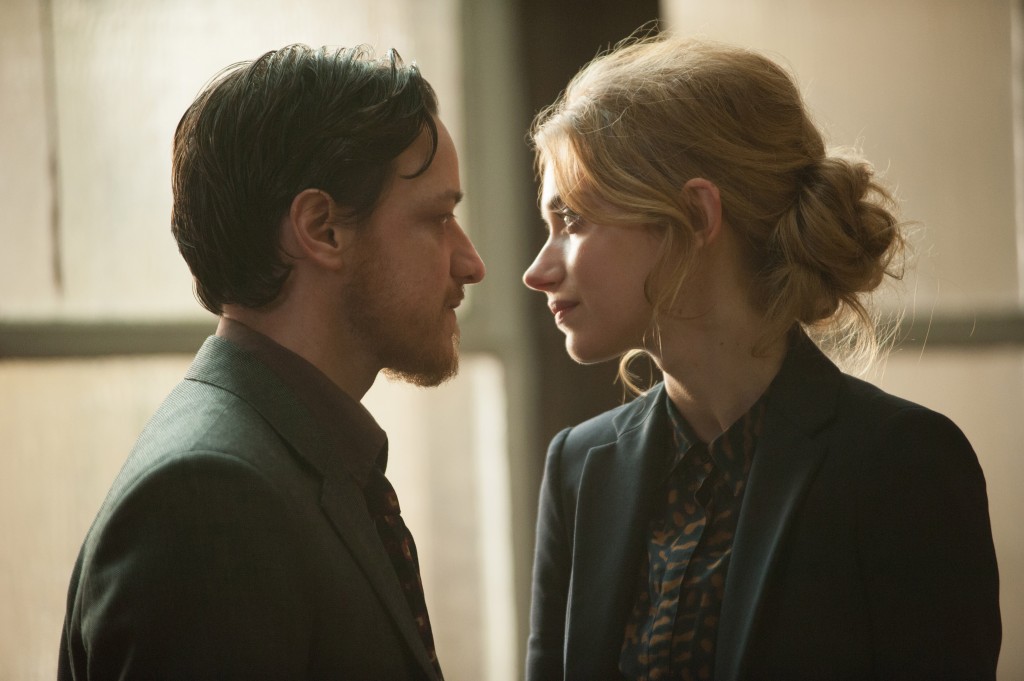 While you might take issue with some of the content (“Pussy’s for faggots”) and the lewd behavior of Bruce Robertson, it’s a treat to see such a fantastically talented collection of Scottish actors all on the same screen. AGENTS OF S.H.I.E.L.D.’s Iain De Caestecker even makes an appearance as Ocky, an informant that Bruce takes advantage of like everybody else. Of course, Scotland isn’t exactly portrayed in a positive light in this film, but “this is Scotland, by Christ!” and don’t worry, Bruce gets what’s coming to him.

FILTH is a difficult film to make, and while I’m not sure Bruce’s story is something that needs to be told (does his bipolar disorder excuse his behavior? Not at all), Jon S. Baird and company are saying something. FILTH has elements of Chuck Palahniuk’s FIGHT CLUB, and feels like you’ve been to one afterwards. It’s brutal, but worth seeing for the performances and to see where you stand on the totem pole of moral irreprehensible behavior.

FILTH is now available on iTunes and On Demand, and arrives in theaters May 30th, 2014. To buy the Irvine Welsh book in which FILTH is based, wander over to Amazon. 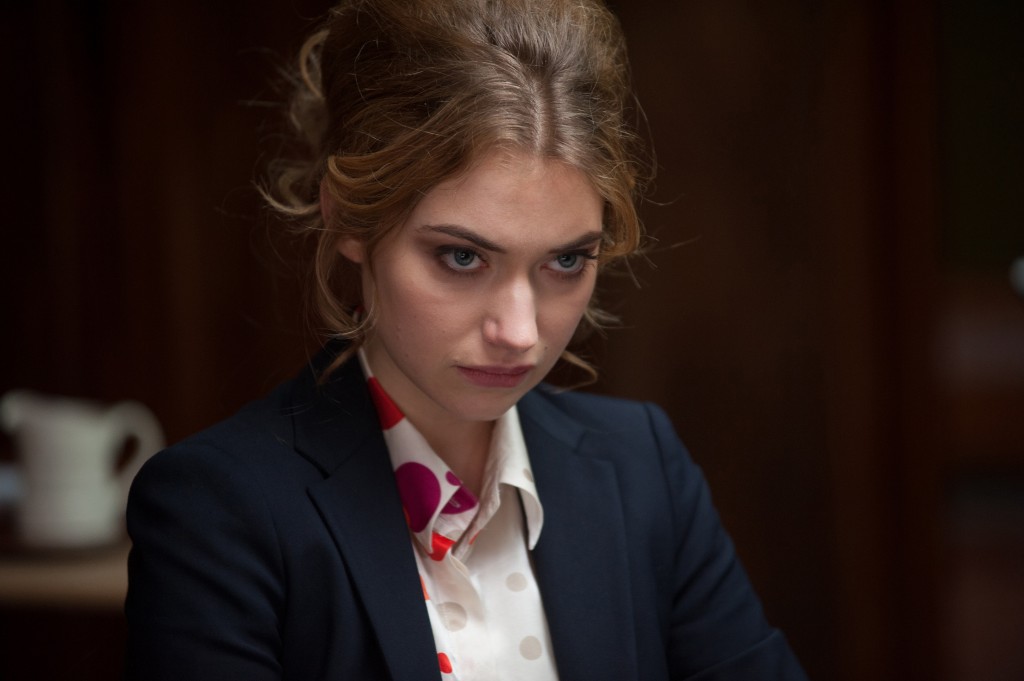