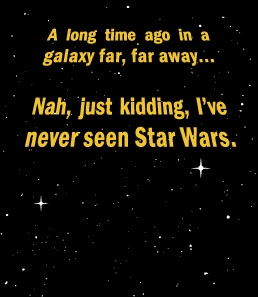 To confess that it’s rocked a few friendships maybe isn’t that shocking, but I am still not ashamed to admit that I have never seen STAR WARS, nor do I have any direct intention to. Not to say that if it’s on or some buddies want to watch it I’ll run for the hills screaming, but I won’t put it on of my own accord. Why? Because I don’t need to. And I am no less of a nerd for having not watched it.

Everyone loves STAR WARS. And what do people do when they love something? They talk about it. Constantly. (LOST, anyone? I never even finished Season 1 because the entire series was spoiled for me by the daily chatter and buzz about it.) I already know the plot twists (Thanks, PITCH PERFECT! But not really.) and have a general idea of what each installation is about, so why do I need to waste an entire day watching it? I like to maintain a spoiler-free zone at all times.

“But, hey! What about all it did for science fiction and film in general! You can’t deny it was revolutionary!”

I never said it wasn’t. I can appreciate how something was revolutionary and changed cinema without liking it (CITIZEN KANE? Who actually likes that movie?) or even watching it. I can respect STAR WARS and George Lucas all the same and still avoid sitting through R2D2 and Yoda for hours on end. 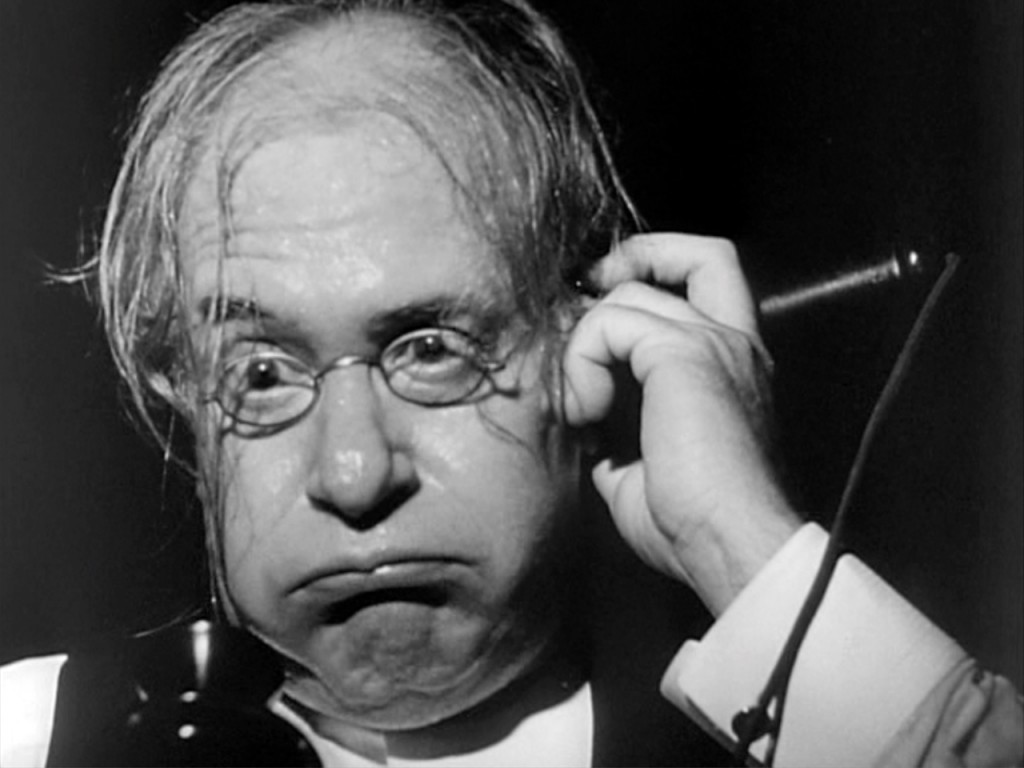 The big question I keep getting slammed with is: Why do I feel that STAR WARS should not be the golden standard to which we hold nerds and nerd-pride? Well, to me it seems to be the opposite. Why is STAR WARS the big kahuna? Why is STAR WARS the be-all-end-all? Without having seen it, I can only infer from the spoilers I’ve been privy to, that it was a largely generic story, albeit with a couple good twists and turns and a sci-fi journey that maybe hadn’t been seen before. But was it actually good? CITIZEN KANE –while it makes me want to gauge my eyes out – was a good movie. It was well-made, beautifully written, superbly acted… it just wasn’t my thing.

From all I’ve heard about STAR WARS, all the OMG STAR WARS, WTF U HAVEN’T SEEN IT and DISNEY’S GOING TO RUIN IT, I haven’t been told a single reason as to why everyone loves it so much. Colorful weapons, philosophical aliens, shiny robots, cool. I can get that pretty much anywhere, so why STAR WARS? Was it well-made, beautifully written, or superbly acted? In all the things I’ve heard and read about STAR WARS, I have never been witness to anyone commenting on the quality of the components individually, only the film as a whole. (Which, to be fair, was still mostly ERMAHGERD LERT SERBERS or drooling over the drones or whatever. I won’t pretend to know what they’re called.) Are being “revolutionary” and “good” mutually inclusive? From where I sit on my tiny soap box that’s covered in rotten tomatoes, no. They aren’t. 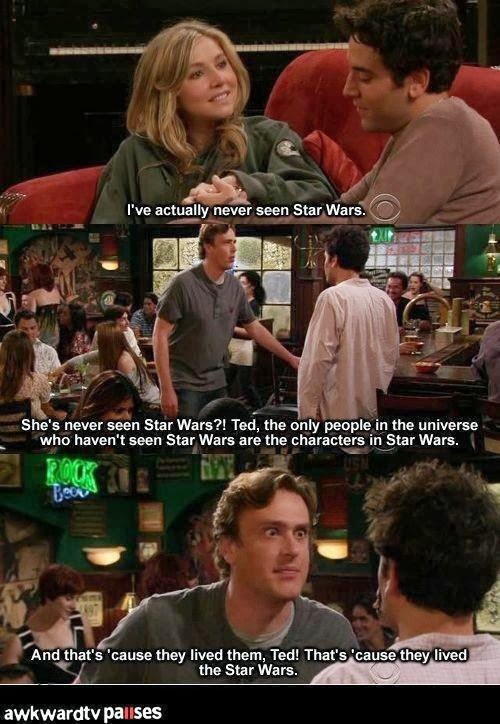 Ergo, my nerd-cred is then slammed for my aversion to STAR WARS every time it comes up, but I am still a nerd. (Sorry, folks!) I absolutely considered getting a GAME OF THRONES tattoo (I already have one for DOCTOR WHO!) and I am proud to say that I probably have more X-MEN comics than you. 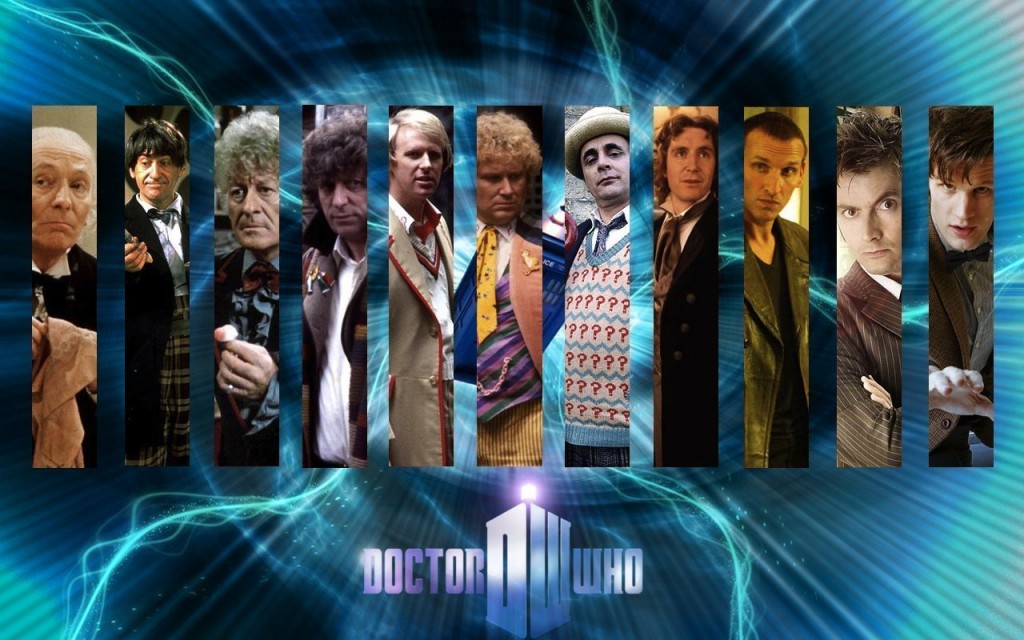 But, if it’s so important to judge nerd (or is it fanboy? A topic for another time) culture and popularity, why shouldn’t it be on something absurdly impressive and noteworthy? Let’s take a vote on how many of us have seen all the original episodes of DOCTOR WHO: the longest running science fiction show in the history of television. At final count I believe it was 784 Classic episodes. And that’ not including any mini-movies, radio episodes, or any other DW narratives that used to air. I’m only halfway through season 1, but that’s probably a whole lot further than the rest of you self-proclaimed nerds.

Time permitting I’ll eventually finish up BATTLESTAR GALACTICA and all the STAR TREK series’. I own all the extended editions of LORD OF THE RINGS – am slightly embarrassed at how many times I’ve watched them – and the complete ADVENTURES OF SHERLOCK HOLMES (in hardback leather binding, no less). I have no words to express how I feel about X-MEN: THE LAST STAND and am more hesitant than I’d like to admit about upcoming CAPTAIN AMERICA: THE WINTER SOLDIER. I refuse to borrow any books even if it’s only to read them once; I MUST OWN THEM. And I faithfully watch BUFFY THE VAMPIRE SLAYER all the way through seasons 1-7, once a year every year. 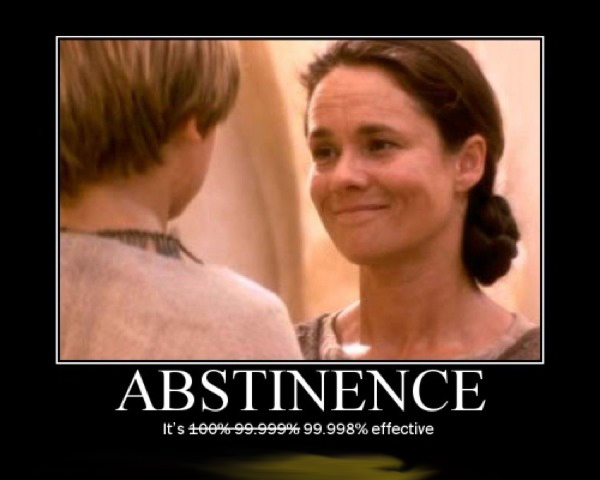 But my nerd-cred, no matter how big or how small, is thoroughly dismissed by all the “real nerds” because I choose to remain a STAR WARS virgin. I vote we abolish all the nerd-shaming and competition over who has bigger glasses and higher wasted jeans. In the hippie spirit of my motherland, Berkeley, California: Stop the nerdism. Love the nerds.

NOTE: The images were chosen by your faithful editor, who happens to like CITIZEN KANE.