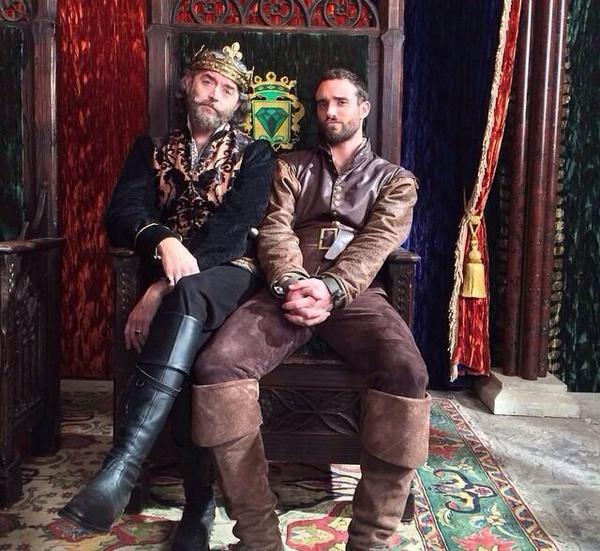 Few things get my attention faster than “comedy musical,” so I was intrigued by ABC’s Galavant from its first promo. My interest only grew as I learned more; it was created by Dan Fogelman (writer of Cars and Tangled), with a score by the legendary Alan Menken (who’s done the music for about half of the greatest Disney cartoons ever, including The Little Mermaid, Beauty and the Beast, and Aladdin). The show ended its four-week run Sunday night; though it was shot as eight half-hour episodes, ABC ran the episodes in blocks of two so the show could fill Once Upon a Time‘s timeslot during OUAT‘s winter hiatus. While networks messing with the intended delivery of a series usually ends up with the show being hurt, ABC actually did Galavant a favor, I think. The show had a very slow-moving plot — focusing more on the whimsy of the journey than advancing its story — so the change to hour-long blocks helped make it feel like the show was moving at a respectable pace (while giving us more time each week to fall in love with that world).

And with the show now over for Season 1, my verdict is that it was an absolute treat. The show had its missteps, as not every bit fully landed, that kept it from quite attaining must-see status. But its high points were just wonderful: funny and charming with a lot of wit. Perhaps most importantly, it was just unlike anything else on mainstream TV right now, and I found that break from conventional programming to be utterly refreshing.

I’ve seen the series referred to as a sort of musical Monty Python and the Holy Grail, or even as a more musical Robin Hood: Men in Tights, and I don’t think either is a fair comparison just because of the expectations that come with invoking Holy Grail or Men in Tights. Galavant probably wasn’t as funny as it could have been, and it went for the easy jokes at times. But there are certainly similarities to those classics in the way Galavant gets much of its humor by reveling in the absurdities of the Middle Ages when looked at through modern sensibilities. As someone who spent some time in college specializing in studying medieval chivalry romances, I really enjoyed watching Galavant, our titular hero, have to worry about things like getting out of shape, or not having enough money to pay a jousting entry fee. The opening moments of the show set things up as if it’s a classic fairy tale, right down to the damsel in distress, the evil king, and Galavant’s own intentionally over-the-top name. Then it quickly yanks that rug, and spends the rest of the season alternately embracing and subverting those fairy-tale cliches. Though the plot was good, it arguably featured too many diversions to be truly special, leaving it up to the actors and the songs for Galavant to become particularly good television. Thankfully, they were up for the task.

The cast is light on famous names, but it’s probably one of the most charming new ensembles to come across in years. Joshua Sasse plays Galavant, and never stops hamming up the heroic tropes no matter how often they blow up in his face. Joining his journey are the ridiculously gorgeous Karen David, whose Princess Isabella is sassy, sweet, and capable, and Galavant’s doting squire Sid, played by Luke Youngblood. The trio has pretty wonderful chemistry in their travels.

Youngblood is actually one of the more recognizable faces in the cast, from his youthful turn as Lee Jordan in the Harry Potter films to his scene stealing as Magnitude (POP POP) in Community. Plus, just from his last name, I’m hoping we’re related…

…but maybe not. Who can say?

Vinnie Jones, professional tough guy, is probably the biggest name in Galavant, playing mostly to type as Gareth the henchman, but unveiling a reluctant soft side as we see him and the king increasingly as friends. But it’s really his bosses who steal the show for the series. First up is the true breakout star of the series for me, Timothy Omundson as King Richard, who’s the ostensible villain at first but quickly becomes the show’s most enjoyable character. It seems silly to label a veteran actor like Omundson as a “breakout,” but not having seen his most significant prior roles (supporting roles in Judging Amy and Psych), he was for me. As King Richard, he was delightfully incompetent and insecure, but played both traits with such cheeriness that it all felt far more fun. And no character feels like he’s having more fun in all this craziness than Richard, seen here taking comedy lessons from the jester who’s been sleeping with his wife:

That wife is Queen Madalena, played by Mallory Jansen, who revels in being the absolute worst. Madalena flips the expectation of being the damsel in distress to instead become the villain that her bumbling husband can only try to be. Watching him desperately try to woo her, and be met by her cold hostility to the very idea, is one of the show’s best gags.

The original promos for the show played up the guest stars of Season 1: John Stamos, Hugh Bonneville, Weird Al Yankovic, Ricky Gervais. Stamos and Bonneville were both charismatic in their admittedly superfluous roles, but Weird Al and Gervais did nothing for me. Weird Al, in particular, seemed disappointing, just because no one seemed more appropriate to show up in a comedy musical, yet his sole song, “We’re the monks,” failed to really stand out. Sunday’s finale featured perhaps the best guest star to me, with Anthony Stewart Head (of Buffy and Merlin fame) getting a brief flashback appearance. Buffy fans know that Head singing in a musical episode is a great idea.

Later in this quick season, the show perhaps spent too much time with Richard’s poor chef (referred to only as Chef), played by Darren Evans to great effect in small doses. Chef’s plotline gets stretched out for a love story with Madalena’s servant Gwynne, played by Sophie McShera, who’s great in Downton Abbey but less great here. Also later, Princess Isabella reverted to a somewhat of a true damsel in distress (albeit always one with a force of personality), keeping the show from reaching its subversion potential. Still, there was never a point where the show wasn’t more hit than miss for me.

The finale wasn’t fully satisfying because of the decision to end on a cliffhanger rather than wrap up the season’s story. The narrator even sings about whether all the singing will kill the show’s Neilsen ratings, and pretty much dares ABC to give the show a second season. (While not hitting Abed levels, the show is often rather meta.) If ABC does go for Season 2, then the cliffhanger will become perfectly fine by me; as is, I’m a little sad that we didn’t get things more wrapped up.

Because unfortunately, Season 2 is probably an iffy proposition. The ratings for the premiere hour were pretty strong, but then dipped in weeks two and three before recovering a little for this week’s finale. I doubt the clamor is enough that ABC feels compelled to give it another go, but we can hope that the show’s cheaper budget and overall solid-ish performance will be enough to demonstrate its value to go again as at least a fine hiatus filler. I certainly hope so, because I would love to see more of Sasse’s Galavant alongside Omundsun’s Richard, a duo that looked like an instant classic in the finale:

But mostly, I’m hopeful for Galavant Season 2 because I think television needs shows like this. Shows that are risky and unusual. Shows that stand out from the mass of crime procedurals and family-life sitcoms. I want to see more shows that don’t really look like anything else on TV, and that’s been the single best trait of this likable past four weeks with Galavant. Let’s do another four next winter.