I do not like Angelina Jolie, but when I say she was the best part of this 97-minute Disney flick, I mean that with the utmost respect and complimentary intentions. I went into this movie really hoping that it would change my opinion about SLEEPING BEAUTY and make me love Maleficent the way everyone else seemed to. Instead, the movie made me wonder what in the hell the studio was thinking. In an effort to make the audience empathize with one of the most infamous Disney villains of all time, they changed the [Disney] story of Sleeping Beauty* altogether, and made an arguably strong female villain, into a horrible depiction of a spurned woman. Thus, the critique that follows is that of an angry feminist, because there is no other way for me to express my rage at this atrocity.

Before I start on my rant, let me a say a few brief words about the rest of the film. The SFX were acceptable. I keep reminding myself that this is a Disney movie that was designed, marketed and made for children, and that I shouldn’t be too critical of the choice of magical creatures created or how fake the CGI** was, but I can’t seem to get past it. I wanted something darker and grittier – Maleficent was a villain – but somehow the fairies and all the other “dark” creatures were just so absurdly comical and obviously fake that I don’t think I ever really fully invested in the story; my disbelief was not, and could not be, suspended. 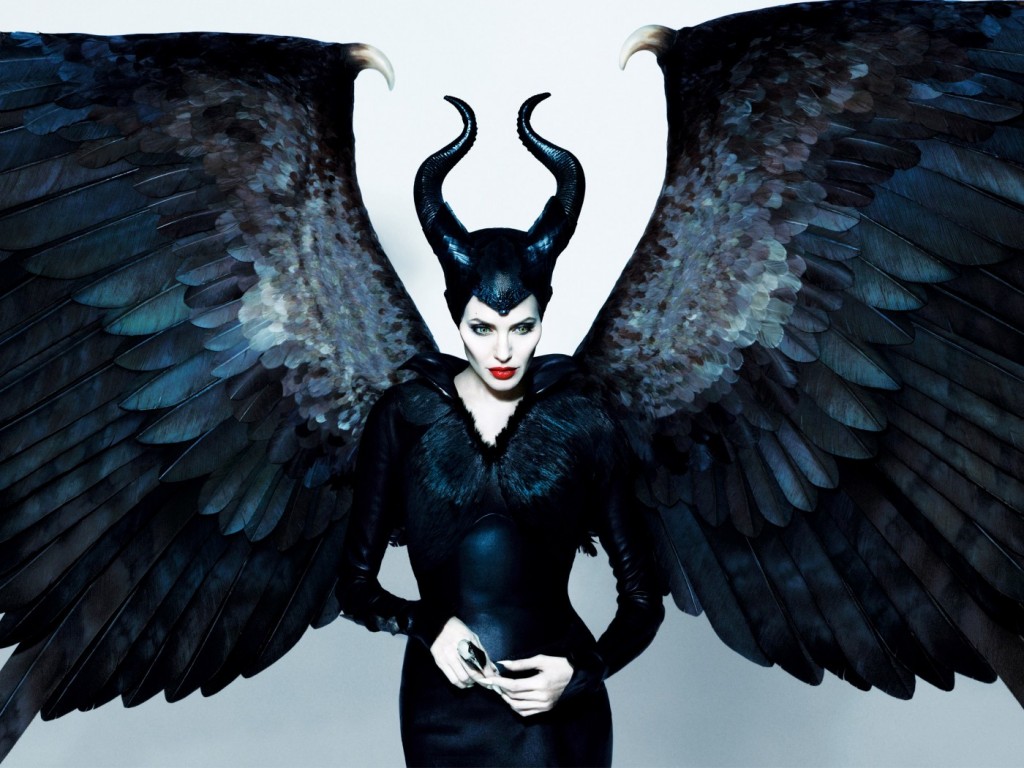 In addition, while the majority of the writing and dialogue was average, some was absolutely horrid. There were lines (about the begging, for example. Something about, “You’re begging. I like it when you do that.” or some such silly nonsense) that made my skin crawl because they were so overwritten and utterly ridiculous (so much so that not even a child in the ideal marketing demographic would have enjoyed them). But on the other hand, there were a few really great lines too, and Jolie had some wonderful dry humor-moments. For instance when she looked down at baby Aurora and hissed and the child just giggled and cooed. Maleficent snapped back with a sharp, “I hate you.” and it was so hilarious and endearing that you almost forgave all the bad lines (of which there were quite a few).

The minimal positive qualities were really limited to one: Diaval, Maleficent’s sidekick. While he didn’t get the screen time I wished he had, nor the ending (I was totally rooting for him to be Prince Charming) his comic relief and acting as Maleficent’s good conscience was quite lovely throughout the entirety of the film.

But really, the only other good thing I have to say about this film is that Jolie did a particularly good job for what she was given to work with. She made Maleficent likeable and funny, and really made us connect with an otherwise horribly conceived character. She not only looked the part and had the calm, cool and collected attitude to really chill someone to the bone, even when she was angry and dark, Jolie was really able to get Maleficent’s vulnerability across which is something I haven’t seen her do successfully, maybe ever. (…Also, that opinion may be a little tainted because I truly can’t stand the woman.) 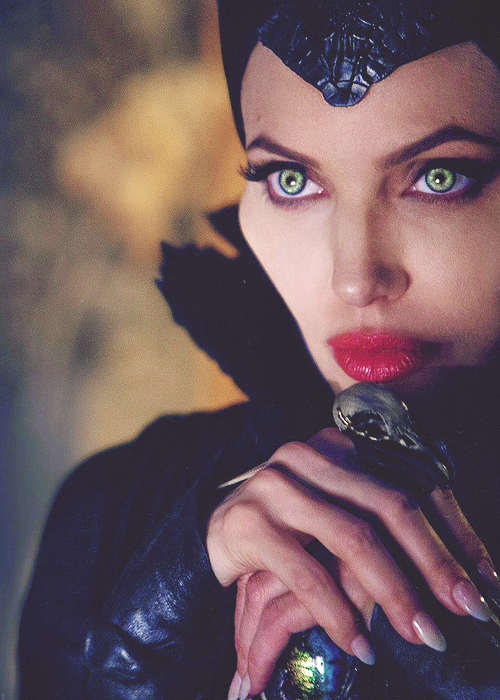 And now the femirant begins. The premise of this film – of Maleficent’s origin – is that she fell in love with a poor boy, and at 16 he gave her “true love’s kiss.” That boy then went to work in the castle and upon the kings’ deathbed, he decreed that the person who brought him Maleficent’s wings would be named his successor. In turn that boy, Stefan, returned to Maleficent, manipulated her, cut off her wings and then became king. Maleficent grew vengeful and hateful at the betrayal and on the day of Aurora’s introduction and celebration of birth, Maleficent cursed her that she would fall into a deep sleep on her 16th birthday only to be awoken by true love’s kiss.

Thus, Aurora was carted off to live with the three most annoying fairies anyone could have ever designed, and Maleficent began to watch over her while she grew up. Even through her hate and rage at Stefan, she grew to love and harbor affection for the sweet natured Aurora, and when the curse fell upon her, it was Maleficent’s kiss that woke her, not Prince Phillip’s (who I’m pretty sure was one of the boys from One Direction. That hipster hair was the worst.)

In theory, this all sounds like a very touching tale of darkness and redemption, but looking at it clearly it’s a story of a woman scorned by a man whose only path back from evil was through motherly affection for a young girl. Maleficient, at the betrayal of her true love (however rightly so: this dude physically abused her and gave a whole new meaning to “domestic violence” by mutilating the poor woman) pushed her so far down the path of retribution that she would curse a baby using the same words that solidified her trust in that man to begin with.

However, after getting to know this little girl and learning to love her as a daughter, Maleficent sees the error of her ways – her maternal instinct is too strong and she tries to lift the curse (to no avail because evil Maleficent was apparently more cunning than good Maleficent). In fact, Maleficent’s love apparently grows so strong that it becomes “true love” and she is the one to break her own curse, waking Aurora from her sleep. 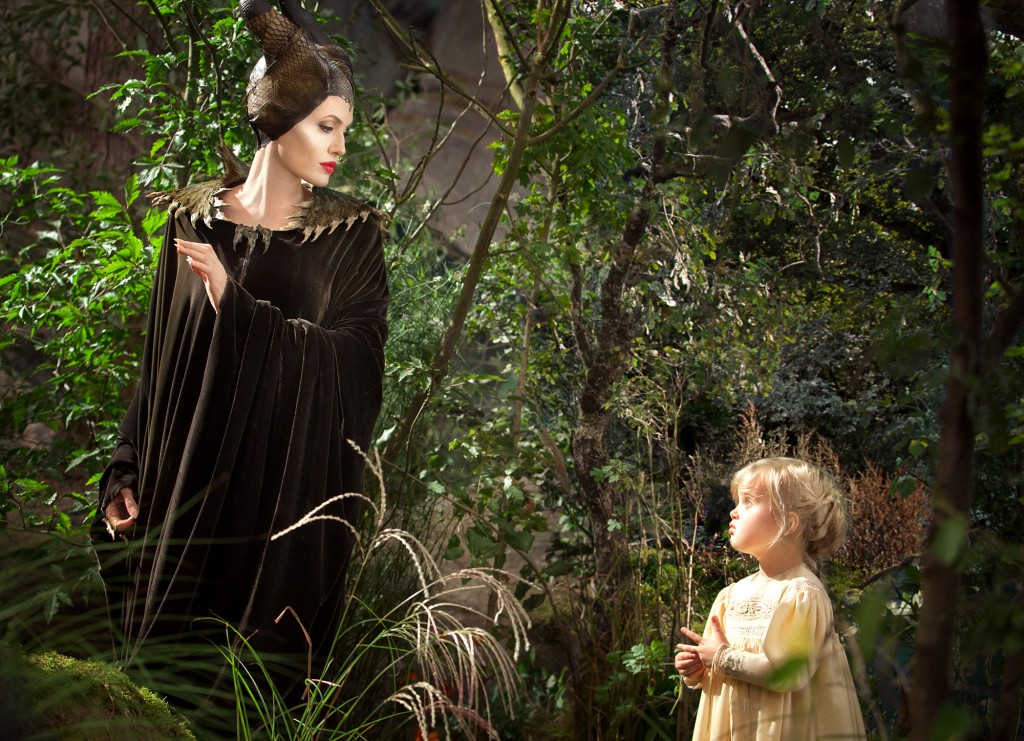 It could be argued that it wasn’t about a spiteful woman enacting revenge, but about love between women, and I would be more than willing to accept that… Had the message that maternal instinct is what saves women from a path of evil not been so apparent. A man hurts her, and the only way for her to get back on track to being a “hero” and beloved by all the magical creatures is by being a mother to a girl – that was not unlike herself when she was a child. Disney tried so badly to make Maleficent into an empathetic character that in twisting her story of descent into something that could be restored in the end, they [un]intentionally sent a horrible message about women.

While I do believe that the story was written this way to ensure a family-friendly atmosphere (true love is always good for that), there must have been a better alternative. What if Stefan had been her brother and traded her in for the human world? Or what if she had traded him in for the magical one? What if it wasn’t Stefan at all, but the nameless and absent queen? What if they were sisters – or best friends – and one betrayed the other? Disney had to make Maleficent’s actions worthy of the crime, and moreover, the crime worthy of the reaction, but the way in they mapped out her story to be recouped in the end was all wrong. The man-hate-only-forgivable-by-maternal-sentiment was the weakest link in the entire film, which was not very strong to begin with.

Unfortunately for Disney, their first live-action Villain story left so much to be desired, that one can only hope they will learn their lesson if they ever decided to reinvent Ursula, Jafar or The Evil Queen and give them more substance than merely wicked, gender-specific trials and tribulations.

*In the original story of Sleeping Beauty, Aurora was cursed for 100 years and in that century her “Prince Charming” found her, raped her, and in her sleep she gave birth to twins. Only after all that horror did she wake up.

**The CGI wasn’t great, but the dragon was awesome. Then you stop and realize that Maleficent wasn’t the one to turn into the dragon in this version, and it’s suddenly less awesome.