Impression Going In: Varied. This movie was actually exactly the reason I wanted to do this project in chronological order. I adored this movie as a kid, then went years without seeing it. I caught part of it sometime after The Dark Knight came out and didn’t think it held up as well. I still hadn’t seen it all the way through in probably more than 10 years.

Impression After Watching: I love this movie again. Honestly, watching it again in this way, after forcing myself to see and appreciate everything that came before it, has validated this entire project for me. All the bad Superman sequels and Toxic Avengers were just scene setters to realize how much unbridled joy this Bat-reboot really provided. 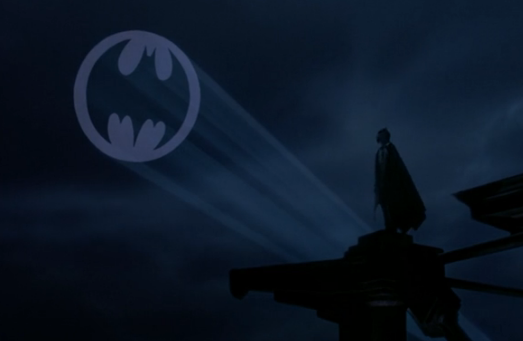 It’s not that all the previous films on the list were bad. I still love the first Superman. The 1966 Batman: The Movie was a hilarious tie-in to the TV show that celebrated an obviously very different Bat-era. Some other movies were enjoyable despite various flaws. But none have had the revolutionary weight of Batman.

If you watch this Tim Burton/Michael Keaton version of Batman after the Christopher Nolan/Christian Bale takes, it might not seem very dark by comparison. But compared to everything that came before it, or even the Joel Schumaker Bat-films that followed it, it was practically pitch black levels of darkness. Keep in mind that the only live-action version of the character we’d seen before was Adam West, who fought sharks with shark-repellent spray. And West was awesome for doing so, but in the comics, the character had long since changed from that campy take; coming out in 1989, Batman capped a decade that saw some of the character’s still-greatest comic book stories ever, like The Dark Knight Returns and The Killing Joke. Now, audiences got to see that evolution for the first time on the big screen. The first criminal Batman faces begs for his life as Batman holds him off the side of a building. I watched the scene where Jack Napier falls into the acid to become the Joker five times, and I’m still not sure whether Batman dropped him intentionally. (I don’t think so, but when the Joker accuses him of dropping him late in the film, Batman certainly doesn’t deny it.) The city even looks dark, with Burton’s Gotham City looking large but appropriately bleak, making it an imposing figure in the story with most of the film taking place at night.

But before I go any further, just one quick aside:

If you don’t why the above photo is bullshit, I encourage you to educate yourself on what a total asshole Bob Kane was, and how Bill Finger really gave us Batman and got screwed from ever getting credit.

Then fast-forward back to 1989, and Michael Keaton gave us Batman again. The choice was widely hated by fans at the time, as Keaton was known mostly for his comedic roles. But he plays the role with a sort of haunted genius, less overt in tortured psyche than Bale later would be, but all the more mysterious and smooth from his subtlety. The film isn’t a true origin story, but instead begins with an established Batman and gives only the barest flashback to the most necessary moment in his past. (It’s how I’d like to see almost all superhero movies operate, as I’ve gotten tired of belabored origin stories.) And he’s a pretty damn good action hero; having seen much of Keaton’s pre-1989 filmography, I can at least understand the surprise that he could play cool and intimidating badass so well. 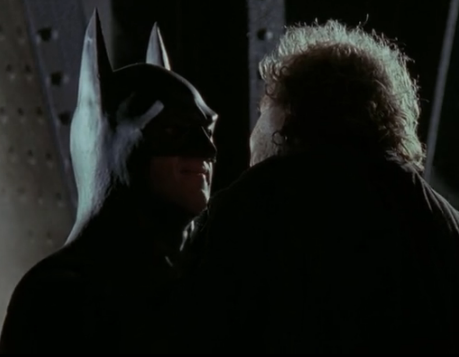 Keaton’s Bat-suit had an iconic look, and while the sculpted-on abs do look a little silly in still photos, I barely even noticed them during scenes. Even the hilariously impractical fact that the suit didn’t allow Keaton to turn his head didn’t really bother me. It just looked cool. So did his Batmobile (complete with front-end nipple!) and Batplane. Batman was a darker take on the character, but one of the film’s best qualities was that it still embraced the idea that a Batman movie should be fun and cool. Walking that line of trying to be both edgy and wish-fulfilling isn’t easy, but Burton did it well. 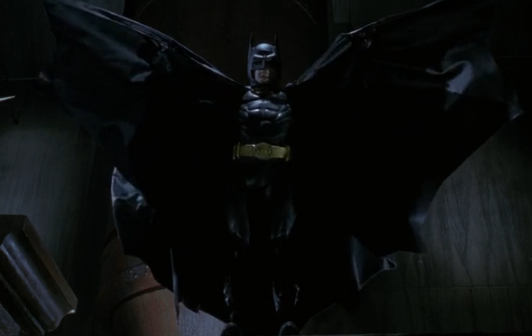 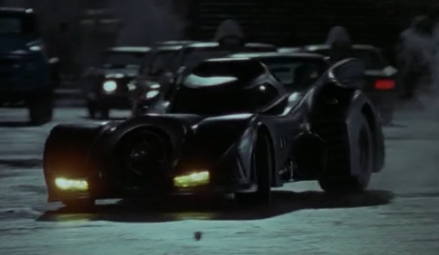 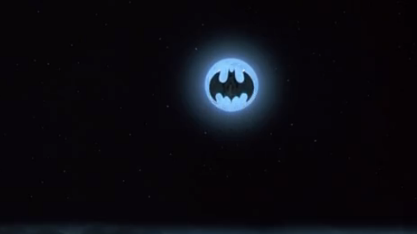 Kim Bassinger was a last-minute replacement for the role of Vicki Vale, a photojournalist who unfortunately got written to have only half of a personality. The romantic subplot between her and Bruce was never more than just ok, other than giving Alfred (Michael Gough, who would keep the role in all four pre-Nolan films) his best moments in worrying over Bruce. The best supporting character was probably Robert Wuhl as wise-cracking and charming reporter Alexander Knox. 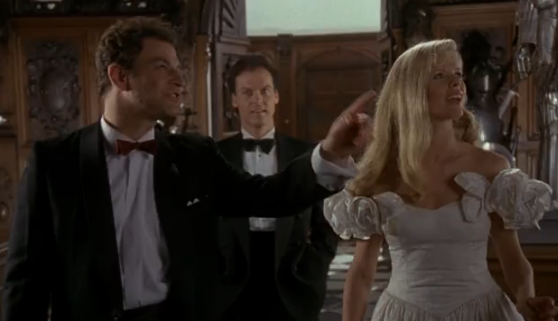 There was also the small role given to Harvey Dent, played by Billy Dee Williams. Burton cast Williams in the hopes of someday using him as Two-Face, which obviously never happened. But somewhere in the multiverse, there’s an alternate reality where a Billy Dee Two-Face movie actually happened, and I wish I could visit that place. 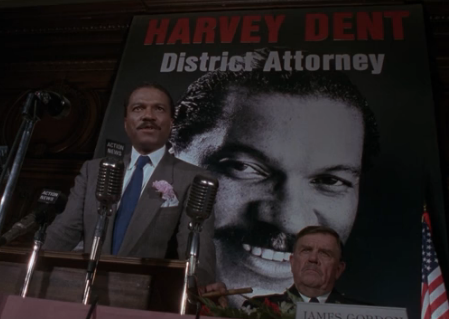 But it was the villain we did get who really makes the movie work. As important as Keaton’s screen presence and Burton’s strong worldview were, Batman couldn’t have elevated to the next level without the Joker being a transcendent villain. And that transcendence is just what we got from Jack Nicholson. 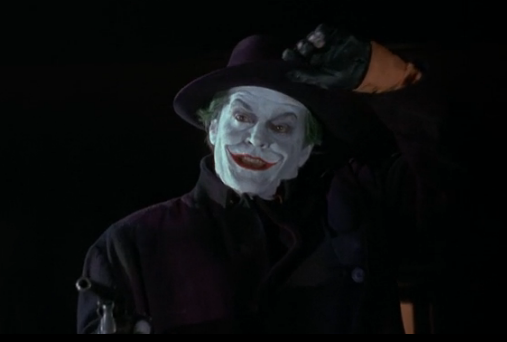 Our natural inclination is to compare different iterations of the same character, and it’s particularly hard to not do so here, considering Heath Ledger later won a (posthumous) Oscar for reinventing the Joker. At the end of the day, yes, Ledger’s overall performance was more powerful, but don’t let that take away from how absolutely brilliant Nicholson was in the role. Where Ledger’s Joker is more mangy and chaotic, Nicholson plays the role with more controlled villainy. Ledger’s Joker has no origin, and the vision of him as a force of nature with no set beginning or end date is certainly appealing. But Batman showed and remade the Joker’s origins, and in doing so, gave Nicholson one big advantage: we actually get to see him go from criminal to freak, and it rocks. This scene below, where he sees himself as the Joker for the first time, is my favorite in the film.

Nicholson brings such wonderful insanity to the part. (As an aside, the soundtrack of Prince songs pairs shockingly well with Nicholson’s mania in the role.) At one point, Joker tells Vicki, “I am the world’s first fully functioning homicidal artist.” And that’s how he proceeds, and what makes this interpretation of the Joker so wholly different from The Dark Knight. Batman‘s Joker isn’t unleashed chaos; he’s an artist, savagely trying to create his insane masterpiece.

The climax of the film is both stupid and accidentally brilliant. The scene of Joker taking Vicki to the top of the church was a late re-write, one that both Burton and Nicholson heavily questioned during filming. It makes zero sense, and Joker doesn’t seem to have much of a plan for doing so. But even if unintentional, I think this scene works perfectly on a deeper level. Batman had already foiled Joker’s big gambits by this point, unraveling his household product poisoning and jetting away his attempt to poison gas the city to death on the street (“He stole my balloons!“). These were to be Joker’s works of art, and his art was all he had driving him. Taken away, all he has left is insanity, running ever higher in hopes of finding escape to some new inspiration.

Which leaves us with the so-called “duel of the freaks”: two men in costumes, unable to stop what they feel compelled to do; they’re both outsiders to the rest of the world but each is the other’s (accidental) creator. There’s a cycle of need between Batman and the Joker, and this relationship is what has made them nearly as famous as any hero/villain pairing in history. Batman got all that, and by doing so, achieved greatness. 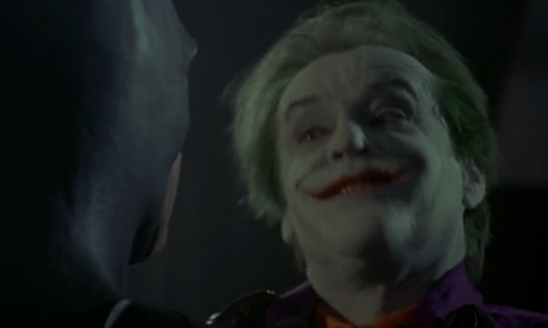 Batman was also a box office smash hit, easily passing Superman for the largest worldwide gross by a superhero film. Both the financial success and the movie’s turn to darker tones and themes make it one of the most important superhero movies ever. After Batman, superhero films became more adult, and they became a lot more plentiful, as more movies tried to duplicate Batman‘s success. But few have been able to match its quality.