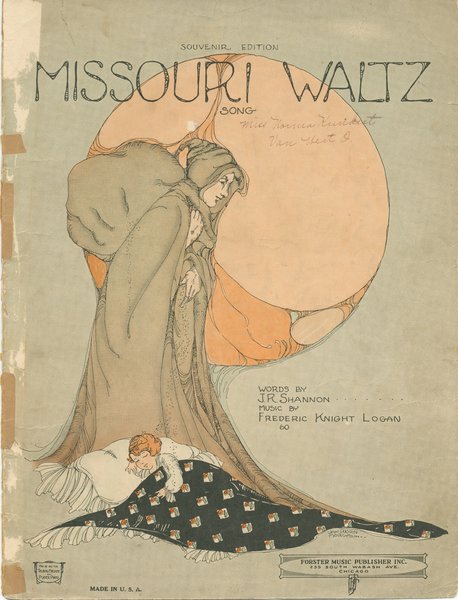 This is easily the hardest column I’ve had to write since taking on the unenviable task of covering the Missouri Waltz softball team. It might very well be the hardest thing I’ve had to write, ever, and that includes my grade school book report for the world’s most boring biography (on James Madison, the perpetually frail and dull “father” of the constitution). My teacher made me rewrite it DURING THE SUMMER.

Last Thursday’s rout at the hands of Vandelay Industries was one of the more stomach churning defeats I’ve faced in my life (and my formative baseball years came on a shitty little league team called the Jedi Knights). Judging by the muted atmosphere of my Waltz teammates (which still feels weird to say), I wasn’t alone. For just that reason, it’s a tough task to venture back into the belly of shame, and stumble out with a column that doesn’t make you sick and kill you. Plus, it’s rather difficult taking notes in between rape, and my notebook was practically bereft of details or anecdotes from the epic lambasting that occurred at the hallowed Olive #2 field. I think you can forgive me for wanting to forget the matchup.

After a weekend of heavy drinking, and drowning my sorrows in nauseating piles of meat, I hoped to wash away the throbbing pain of victory, and take solace in the carnal pleasures proffered by Los Angeles. But, I learned it’s difficult to get hard after such an emasculating defeat.

This column will ensure we never will forget, transmogrifying the faint memories we have of the game, that are akin to the light scratches of graphite from a pencil tip, into harsh strokes from a Sharpie, permanently etched across our frontal lobe like a cosmic “L” sign. Hopefully, rather than exacerbate the problem, this article serves as therapeutic, a tool for motivation, or represents the bottom before a triumphant upswing, leading the Waltz to an encouraging playoff performance.

Before first pitch, everything was awesome. It was such a sunny, beautiful day in Burbank, and for a few minutes, all was right in the universe. It seemed as if Vandelay Industries might even forfeit, which had been a very real possibility for the Waltz coming into the game. A few of the squad got in a productive and effective mini-practice beforehand. *SPOILERS* Even TRUE DETECTIVE got a happy ending. Why couldn’t we?

But, it turns out the universe was merely playing with us, chewing us up and spitting us out, like a dog would a shoe, or your girlfriend would during oral sex. We just got snowballed. We were tempted with that elusive feeling of glory, blinded by delusions of grandeur, of playing with a makeshift roster and still finally announcing our presence in the vaunted C division (it should be noted again, that it’s the third highest division…of four) by beating a team that the Waltz’s arch-rivals The Goodfellas had smeared the week prior. 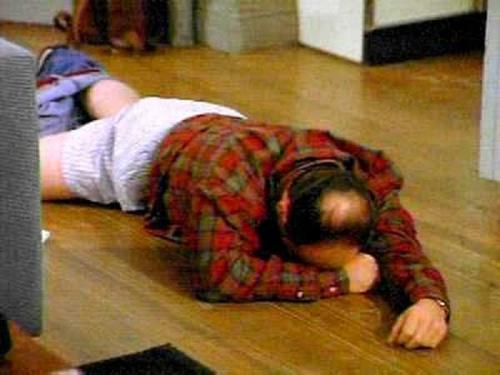 Instead, we were the (pap) smear.

After coming through in a pinch a couple weeks prior, I was called on again, along with a couple other super subs (Stacy and Jack), to replace SS Dan Bence, SP/Coach Jim Wolfe Jr., Alicia Pharris and Bret Watkins, among others. Jack would take the mound and bless us with his Happy Gilmore-like swing (albeit with slightly better results), and Stacy played a rousing game at catcher, rounding out a brand new battery for the early evening game. Stacy also had a nose stud, and hit it out of the infield, which was a feat for this squad. We all proved inadequate band aids for the massive, gaping, cavernous holes in the roster left vacated by the Waltz veterans, who all had “real life” obligations to attend to. The result was like trying to waltz without your partner. Awkward, lonely, and worse, embarrassing.

The weather was a factor early. It was almost too sunny (sorry east coast), as the glowing orb in the sky attacked hitters in the batter’s box, lending a helping hand in sending Brandon Klaus to the pine with a backwards-K to lead off the game. We didn’t realize it at the time, but that one at bat set the tone for what was to come.

Other than that awful fucking omen, the game started out innocently enough. It was 2-1 after 2 innings, and 3-2 after three innings, Team Seinfeld staked to a slight lead. Wolfman Jack was dealing, showing no ill effects from months on the shelf, and the defense, aside from a certain right fielder (me), was humming. Collin was a vacuum in the infield, pulverizing every possible defensive metric in his path. Charlie had the pleasure of catching three pop ups at 1B, which is sad (for the Vandelay Industries). Brant continued his stellar run in LF.

Stephen Leggitt added another homer to his gaudy totals, though if I was keeping score, I would’ve called it a four base error, as the left fielder misplayed it so bad he should be in NBC’s BAD JUDGE pilot. Of course, I also had my chance to misplay a ball that almost reached the infield of the other diamond, leading to a round tripper for the bane of my existence, the lefty leadoff man who either hit it over my head, in front of me, or in the gap, every single time (save for a late at bat in which Graham made an awesome grab at 2B). In addition, I practically misjudged or misplayed every ball hit to me, so that was nice, a harsh reminder of why so few members of the press make the leap to the other side. It’s a lonely road for a reason.

But even so, we were hanging in there, the bats lying mostly dormant, but still keeping us in the game, merely a run or two behind. Then…the fourth inning happened. The less said about the fourth inning, the better. It will remain a stain on our careers. The Vandelay club started to hit everything hard (ripping the condom off), making even routine plays difficult, and along with a parade of gappers, the errors came in bunches, and we limped back into the dugout down 15-2, in danger of being mercy ruled. 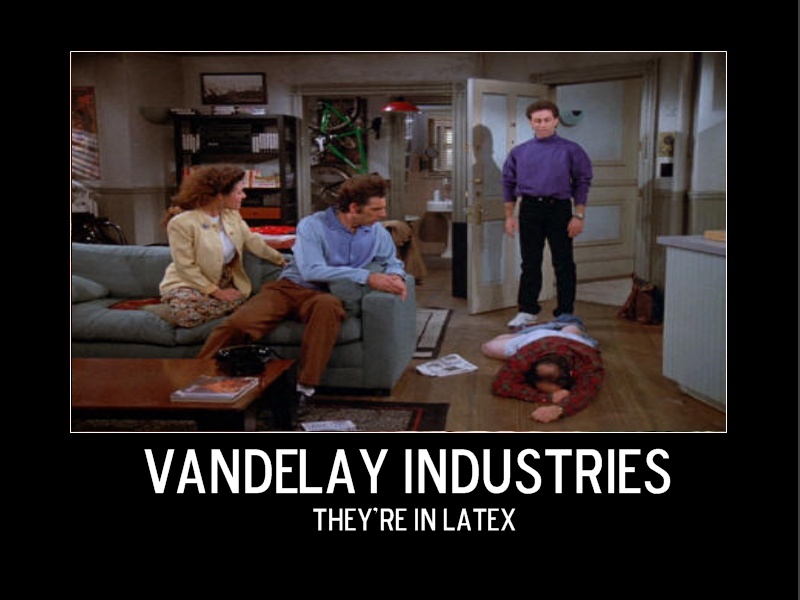 That would happen after the 5th inning, but the Vandelay Industries gave us the option to play on. I’d say they were being kind, but they clearly just wanted to continue to rub it in, taking solace in being on the other side of a rout this time around. If there’s one thing you can say about every member of the Missouri Waltz ballclub, is that each one of us/them is a glutton for punishment.

And so we played to the bitter end. It’d have been brave and honorable if it wasn’t so sad. Innings would be lucky to last more than a few batters over the minimum. Rallies had less of a chance for survival than a Blockbuster. I got to hit 3 times in 7 innings, a pathetic total. Everyone on the squad got a hit, but not many got more than one, and rarely did anyone ever score.

Even when we did, it was a chore, as evidenced by Collin’s innumerable adventures around the base paths. During some middle inning, when the game was well out of hand, Collin made the turn for home on a base hit. It was a relatively close play, but one made closer by Collin’s slide. Scoring standing up would’ve been more effective and safer. A straightforward slide might’ve been the best call, but Collin was wearing shorts that would make John Stockton blush, so instead, he dove head first, only managing to tap the special softball home plate diaper. The ball arrived around the same time, and he lurched again to grasp home, and did so, barely avoiding the tag. Considering Scruffy, the blind, deaf and incontinent umpire likely didn’t see any of it, the whole play likely didn’t matter. But it was one of the few successful and fun highlights of the game. In the final inning, Collin must have been hearing imaginary commands from Dustin Hoffman (“Run home Jack!”), as he turned a triple into a pickle between third and home. How you get a pickle in between 60 feet base paths is beyond me, but it didn’t end as happily this time around. He’s no Benny “the Jet” Rodriguez.

While the effort hasn’t lagged, it’s officially time to start worry about the Waltz offense. The Waltz were missing arguably their two best hitters (certainly their highest OBP men), but there is no excuse for scoring less than 10 runs in a softball game. Graham hit into 2 double plays, the pop ups came in droves, and everyone did their part in killing any momentum. We were like McLovin if we ever found a hole.

Nothing went our way, and even removing my defensive difficulties from the picture, the Vandelay Industries simply outhit us by miles, spraying lasers all over the field, taking advantage of our lack of a rover in the outfield. How do baseball teams play with three outfielders?

After the game, I was paid my fee, a crisp $20, which was less than what we lost by. I’ve never felt worse taking money in my life (but I did take it). The game hurt so bad, that no one wanted to stink up The Blue Room with our presence. The Blue Room is a place where 55 year olds make out with impunity. We were so bad, that we didn’t deserve Coors Light (and Coors Light sucks).

The Waltz went 5-0 in the D league. Now they’re 0-3, two games away from an absolute Jekyll and Hyde performance. It’s easy to get down after such a soul-crushing defeat, but there’s light at the end of the tunnel. Dan, Jim, Alicia, Bret and company, should return next week, and they have the ultimate motivator: the Goodfellas, and a chance at redemption and a sexy tale that even Hollywood couldn’t screw up. As Commander Peter Quincy Taggart once said (a lot): Never give up, never surrender. 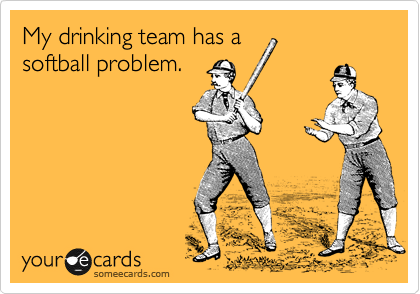