When Peter Capaldi was announced, I was ecstatic. Not because I knew who he was (because honestly, I didn’t) but because he was so unlike any of the New Series Doctors. He was older, a bit wiser looking and there was something that was so exciting about getting back to a Doctor who wasn’t fresh out of puberty.

I stayed away from all spoilers (aside from new companion/villain casting) and I refused to read about the script leakage (Shame on them!) let alone go in search of the scripts themselves. I was bracing myself, I was ready, I was convinced it was going to be awesome season because I (stop your groaning) love Clara and wanted her to finally be able to step out of Amy’s shadow and maybe that could happen with a new Doctor. Unfortunately, that was one of the only things that happened in the Series 8 premiere that was worthwhile. (I don’t care what anyone says, Clara is awesome and the restaurant exchange between her and Capaldi’s Doc was phenomenal).

Now I know the premiere was a few days ago, but I controlled myself and didn’t watch it until I went to a proper screening last night with a lifelong Whovian (who like many others, is a diehard Tom Baker fan). But when leaving the surprisingly full AMC theatre, we were both shocked at how underwhelmed we were. 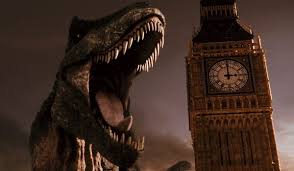 The story that this long ass episode tried to tell, was a hot mess. Starting with a dinosaur roaming Victorian England, ending with some funky-freaky incarnation of the Clockwork Androids from one of my favorite episodes of television ever (S02.E04 “The Girl in the Fireplace”, also written by Moffat) jumping out of the TARDIS and spearing himself to death. The episode was a disaster when it started and a disaster when it ended.

Like many of Moffat’s episodes since he took over as show-runner, it tried to do too much in a short amount of time and instead of blending together as one cohesive and intriguing mystery, it was too  many different ideas and not enough of any of them. Between the unnecessary dinosaur, Capaldi’s absolutely beautiful exchange with the homeless man, Clara being interrogated by Madame Vastra, and the Doctor and Clara trying to figure each other out at the same time as solving the mystery of “what the restaurant was”… It was just wrong and it did not work.

In addition to the many storylines that didn’t weave together, I, and I suspect many others, were also more preoccupied in figuring out this new Doctor and who he is (which became increasingly more difficult as the episode went on) rather than investing in the ridiculous story. The first episode with a new Doctor is always challenging to get through – whether it’s because you can’t let go of the last one (I’LL NEVER LET YOU GO, MATT SMITH) or because the Doctor has spent the majority of the episode passed out and regenerating (I’m looking at you, Tennant), but Moffat made it extremely difficult on us this time. Capaldi’s inner dialogue that was very much outer dialogue for the entire episode was beautiful and tragic and interesting…but is that really who this Doctor is? Answer: Apparently, given the closing scene between him and Clara.

All that being said however, Peter Capaldi did a wonderful job embodying our beloved Doctor. He had the weight of the world on his 2000 year old shoulders and commanded every scene he was in, not to mention his comedic timing and humor was just perfect (as was the writing for those particular moments: so many good one-liners and jokes, especially about being Scottish.) But unfortunately again, none of Capaldi’s excellence in performance changes the fact that the problems in writing outweighed even the best of the funny. To add insult to injury, DOCTOR WHO has also become a bunch of green screen and CGI. I’m all about improving quality of TV, what? One of the great things about DOCTOR WHO was the kitschy sets and people dressed in monster-costumes, and now we’ve moved onto gigantic computer-generated dinosaurs and horrible shots of dead androids (which, by the way, were completely superfluous and crude for the nature of the show).

Basically it comes down to this: I have been Team Moffat since he took over DOCTOR WHO three series’ ago; I have stuck by him, defended him, and supported him but I’m starting to feel as if that time in my life is coming to a close. While SHERLOCK is only getting better, Moffat doesn’t seem to have a grasp on what he’s doing with DOCTOR WHO (although, I do love that they finally addressed the question of who gave Clara the TARDIS phone number) and I’m crossing my fingers that he doesn’t take us down yet another road that completely eradicates past storylines. He better make a big change and real fast if he expects to keep this particular Whovian happy.

Get it together, Moff, and quick.