One week ago was “Force Friday,” the premiere date of a new lineup of Star Wars merchandise that will help lead up to the release of Star Wars: The Force Awakens, the much–anticipated Episode VII. Alas, I was unable to join the hardcore shoppers that day. Or the next. By the time I eventually arrived at a local Target last Sunday, the Star Wars aisles were almost entirely picked over. I was eventually able to find a retro-style t-shirt, a Slave I mini-figurine, and one cheap Lego Star Wars set. 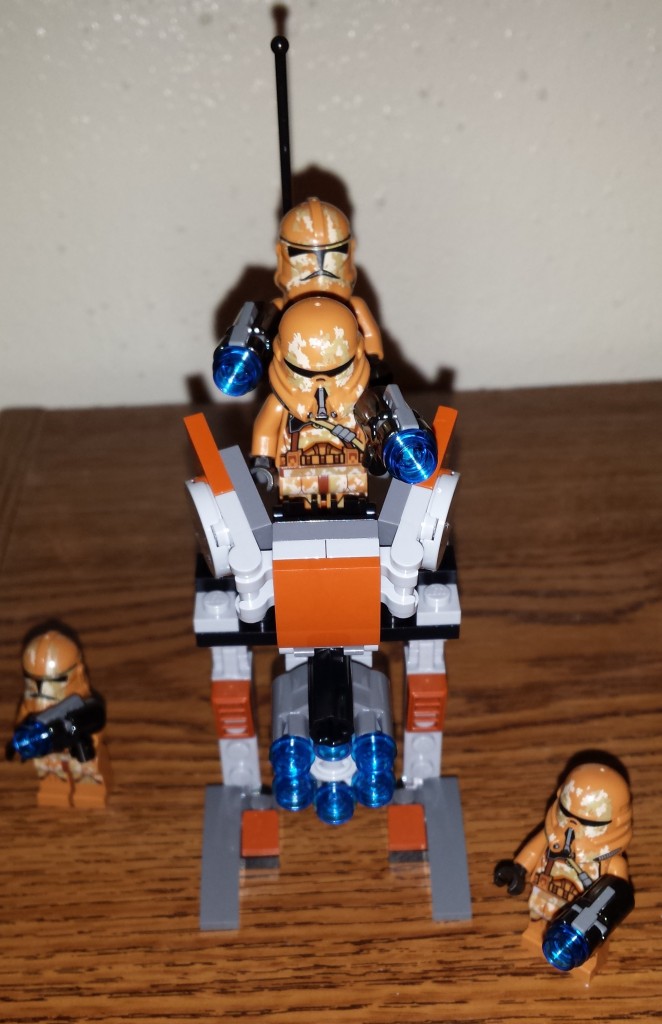 Only later did I realize that this Stormtrooper set wasn’t even for The Force Awakens, but instead an old Attack of the Clones tie-in of the Battle of Geonosis. By then, it didn’t matter that the Legos were merchandise for a terrible prequel movie; they were a blast to put together. Shortly after finishing it, I already wanted more. I ended up with another Lego set, this time a new Force Awakens piece: Poe’s X-Wing. 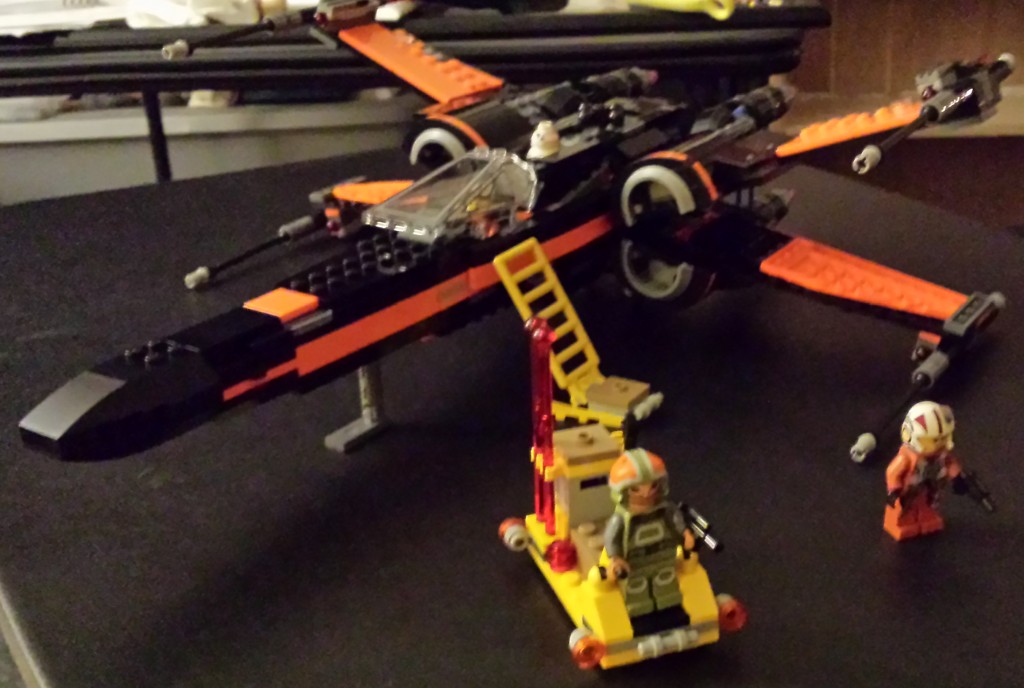 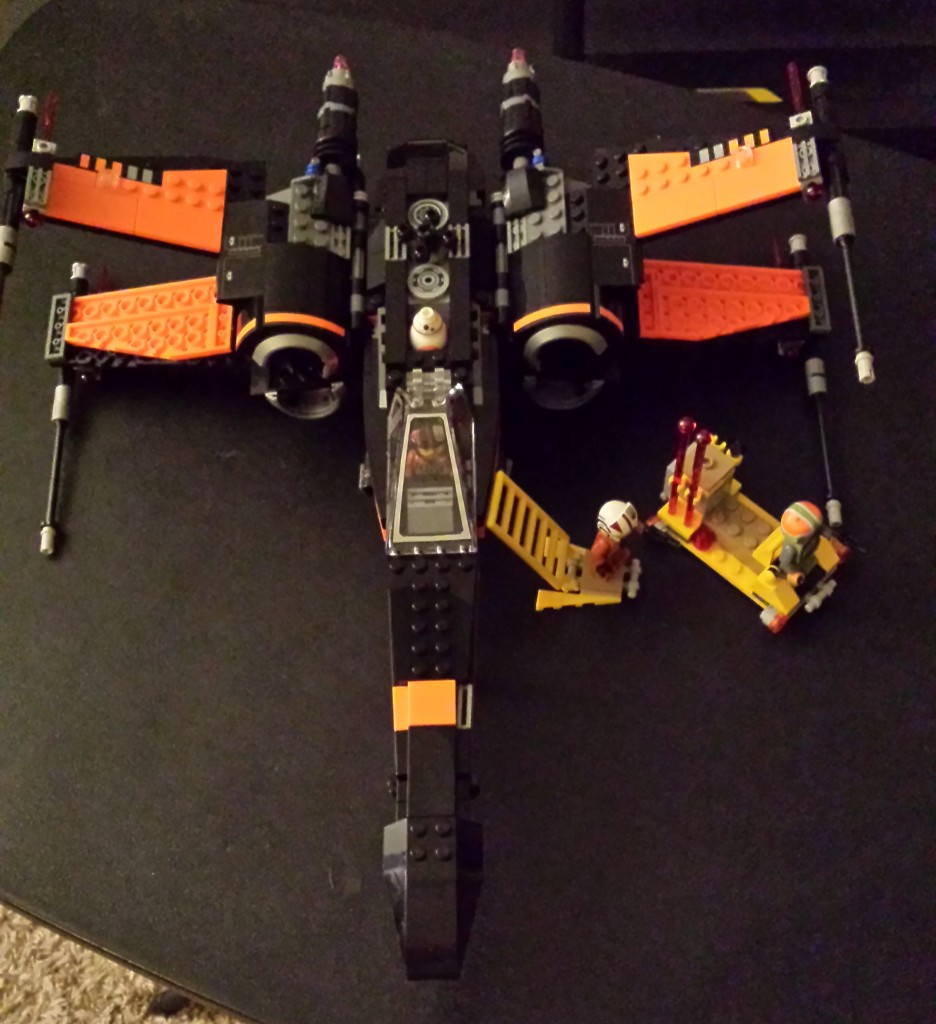 The X-Wing was a much bigger construction project, taking me a few hours (I’m slow) over two nights, but it was also an absolute treat and some of the most fun I’ve had in a while. Who knew how much fun modern Legos have become? Well, lots of people knew, I’m sure; but for me, this was a new realization.

I finished Poe’s X-Wing last night, and soon found myself taken by nostalgia, and dug through my closet for a very old Walmart sack full of my old Star Wars action figures, which I hadn’t seen in years, maybe even a decade or more. My collection was never quite huge, especially when you consider the insane multitude of action figures made for the franchise. Plus, I had a few figures destroyed by my childhood dog — a Boba Fett figure, which I quickly replaced, and a few others I never did: a Darth Vader, an IG-88, a Yoda, a Y-Wing, and an Endor-style Stormtrooper/Scout trooper (which I always thought were the coolest-looking Stormtroopers). Oddly, I never owned a Luke Skywalker, RD-D2, C-3PO, or an X-Wing. I also found, lumped in with all the Star Wars pieces, a random action figure of Marvel’s Strong Guy, sporting his early 1990s-style X-Factor costume. Why was he in with a bunch of Star Wars pieces? I have no clue anymore, but his comics-accurate disproportionately huge upper body foiled my attempts to even stand him up for a photo. 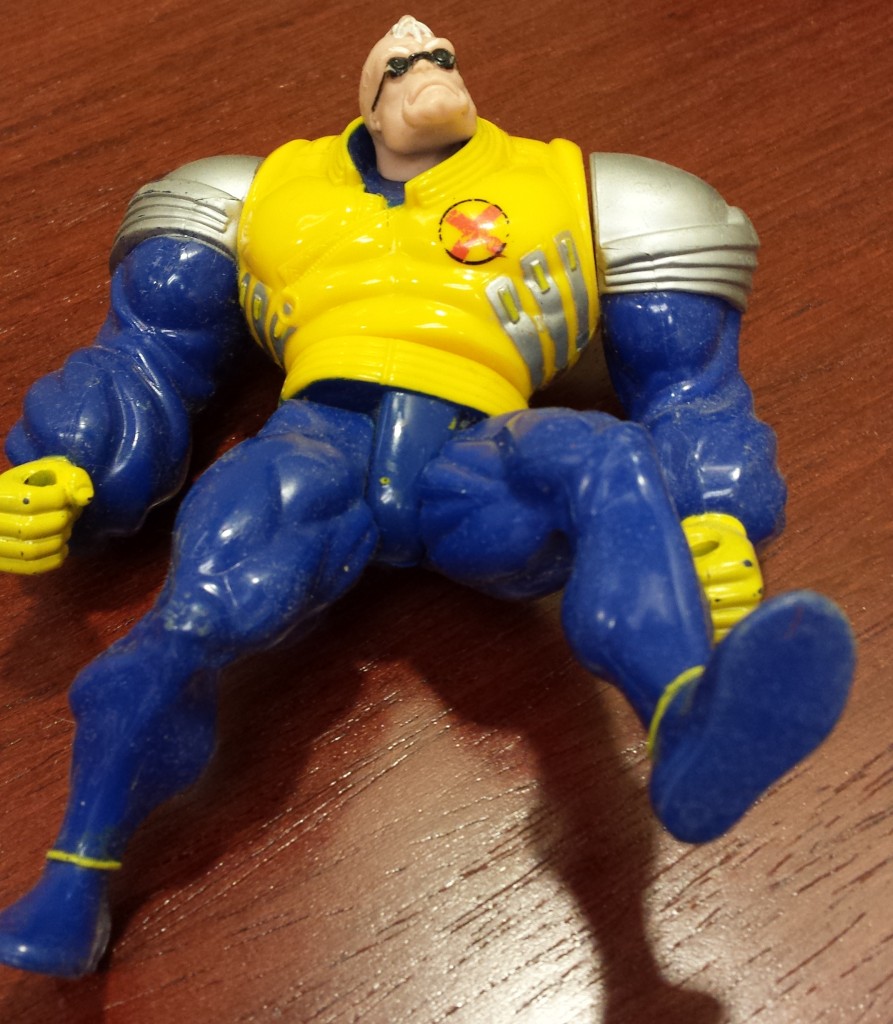 Of those actual Star Wars toys that remain, all were a bit dusty, and a couple were a bit banged up (because fuck keeping them in the packaging; I got these thing to play). All of them have fond memories associated with them. So here’s a rundown of what’s left and how they compare. 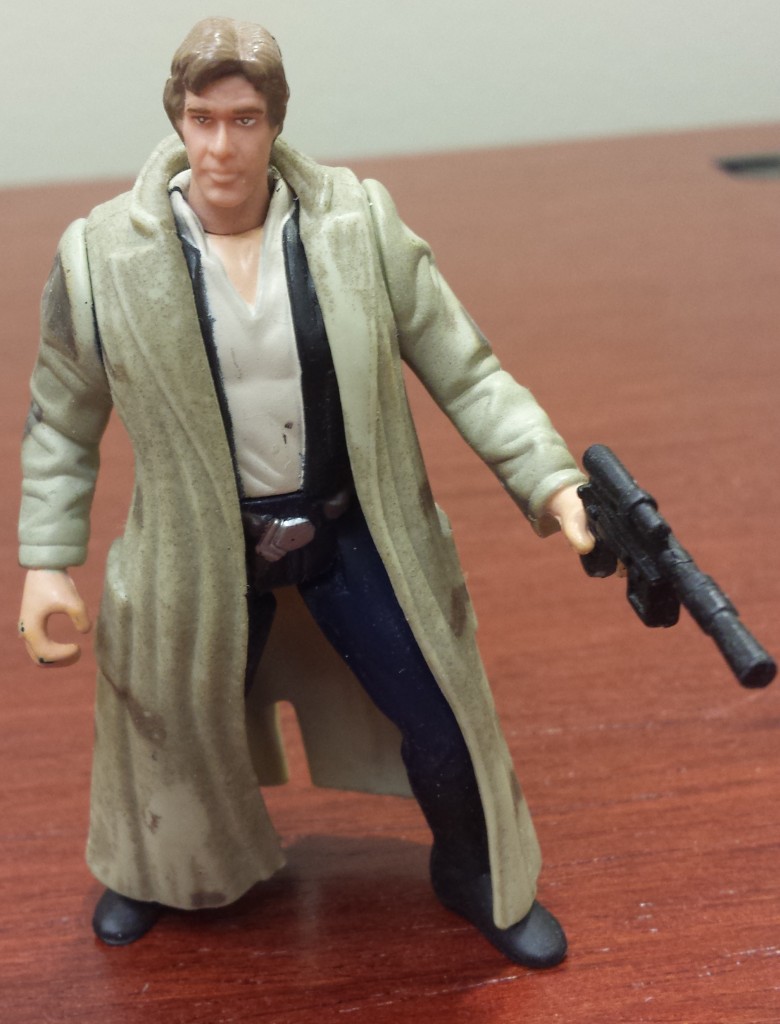 One thing you’ll quickly become aware of in this list is my childhood love of The Return of the Jedi. It’s become en vogue to criticize the film for its cutesy Ewoks, but I was blissfully unaware as a child that it even could be considered anything less than great. But this Han Solo figure in his Endor camouflage certainly isn’t great. His face looks downright dumb, and only mildly Harrison Ford-like at best. 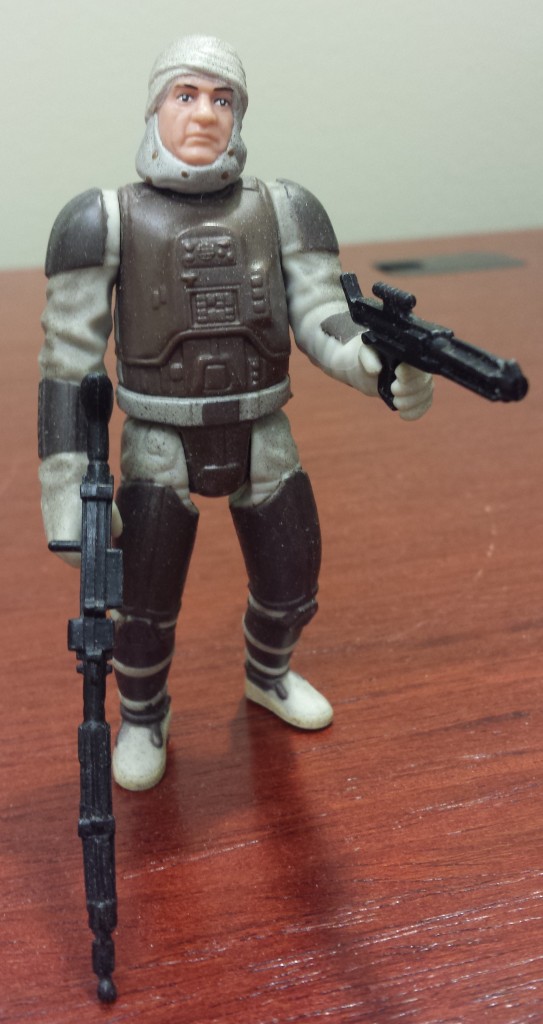 You’ll also notice my love of the Bounty Hunters, whom I was obsessed with in the old, now-defunct Expanded Universe. In fact, I once owned almost all the original Bounty Hunters from Empire, only lacking 4-LOM, and I regret never replacing my IG-88 figure. But poor Dengar in this action figure. I loved that he came with two guns, something that was mildly rare then, but he looks like an old homeless man here.

Yeah, more Endor.  This version of Leia was originally super lame, coming in a bundle with Wicket (who was the only reason I bought it) but no weapon. However, when my old dog destroyed several of my action figures, one survivor was Boba Fett’s gun. I ended up getting a replacement Fett, but now had an extra gun of his, so it went to Leia, whose hand can just barely support it. She still looks mediocre, but it amuses me to see her in her celebration dress while holding Boba Fett’s gun. 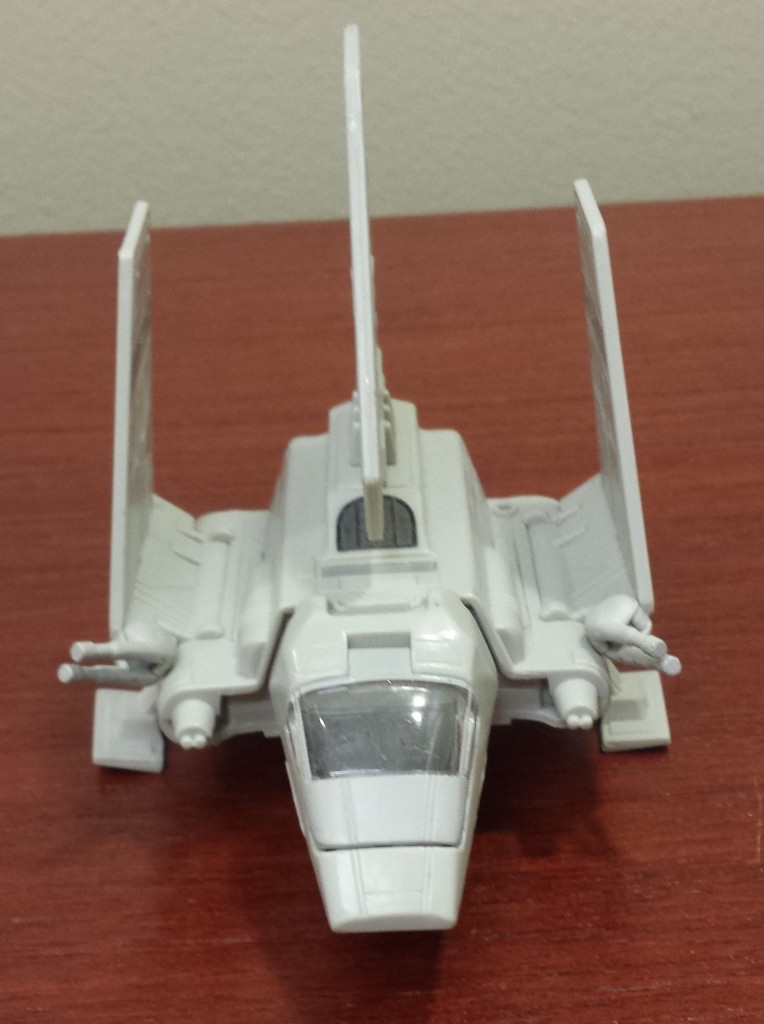 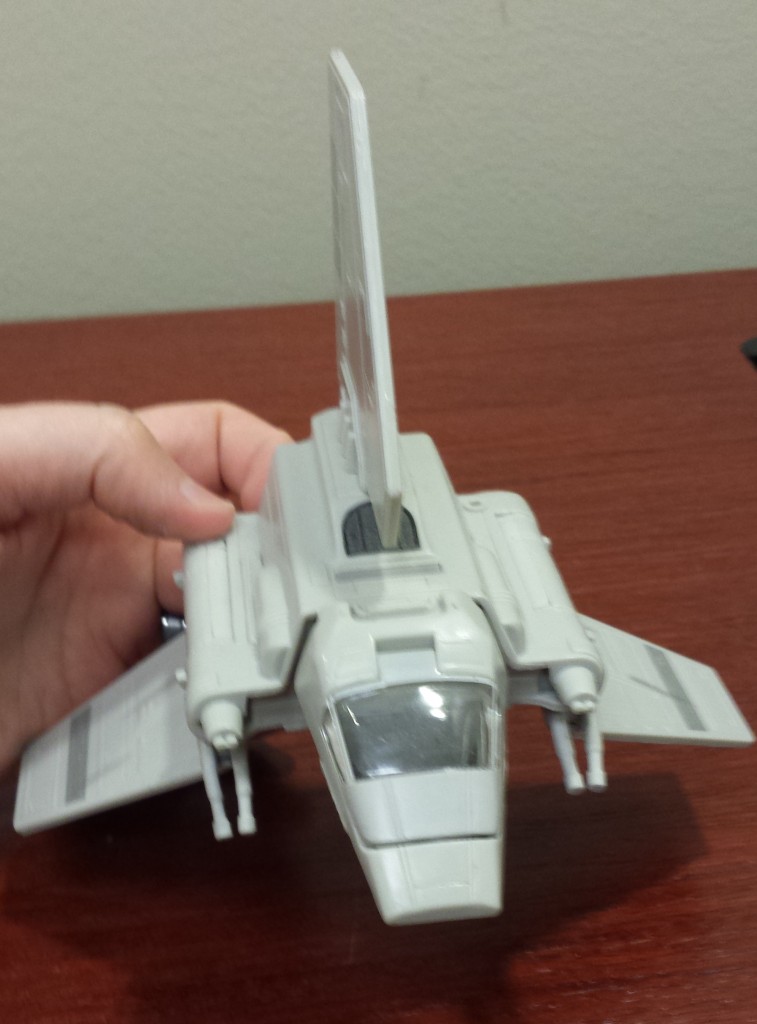 The Lamba-class T-4a shuttle, better remembered as the Imperial Shuttle, was one of the cooler-looking ships in the original trilogy to me. I was fairly mesmerized watching its wings fold and unfold in the film as kid. The toy version also has that ability, though as you can see above, it can’t stand on its own with the wings in their flight position. 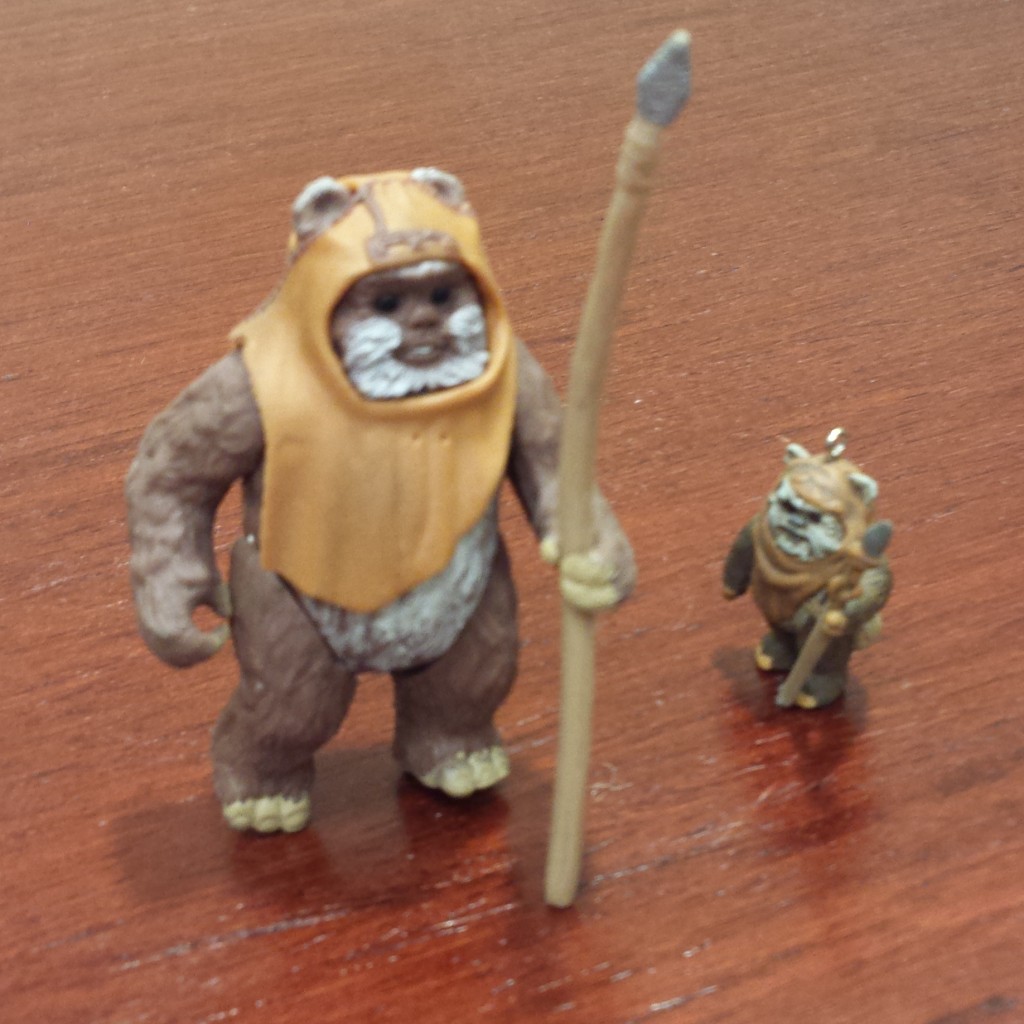 With bonus mini-Wicket! It looks like mini-Wicket is some kind of figurine attachable, but I can’t recall what for. Big (well, relatively big) Wicket was a sometimes-favorite, as evidenced by the fact that I still recalled his last name from memory all this time later. (Alas, I failed to recall his middle name, Wystri.) His staff has become bent and droopy with time, but hey, it happens to every Ewok. 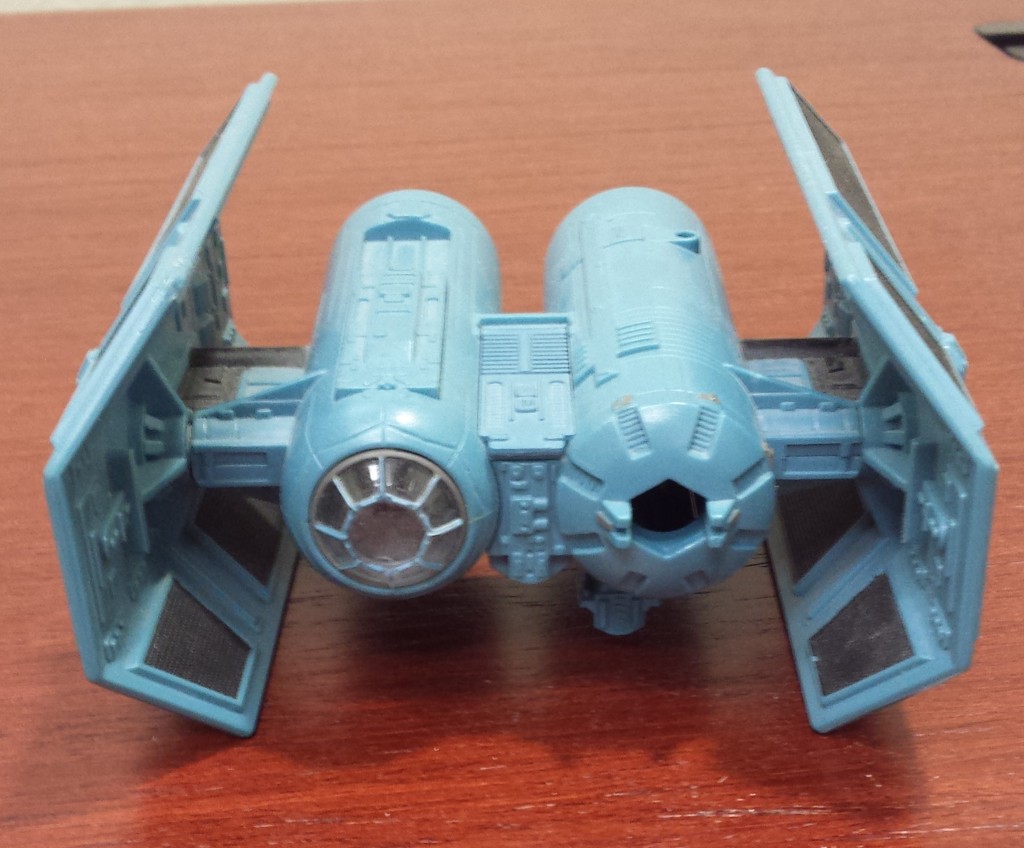 Classic as fuck, the TIE Fighter still looks cool. And this one remains fully functional, still capable of firing a plastic laser.

5. Shadows of the Empire-style Chewbacca 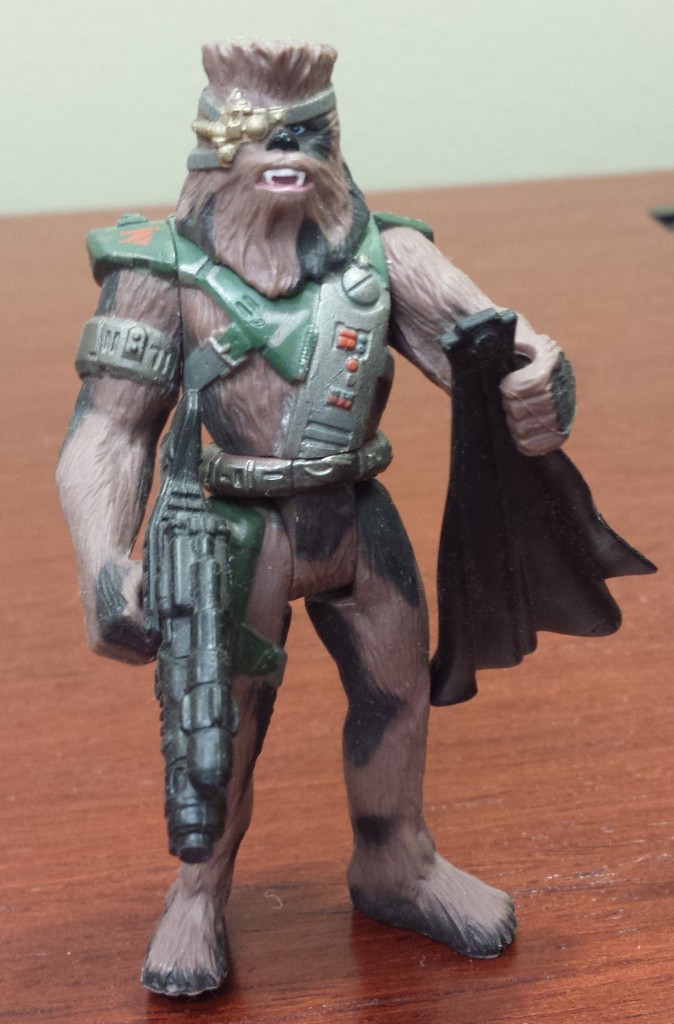 I once saw this Chewbacca figure on a “worst Star Wars figures” type of list, and I suppose I can understand why. Everything about its design screams of an attempt at 90’s-style EXTREME. It was part of a tie-in with the multimedia project Shadows of the Empire, a book/comicbook/video game combination release in 1996 (I only read the book, and enjoyed it). In that story, Chewie has to go undercover as a bounty hunter. As an aside, I remember telling that to my dad, who scoffed because obviously someone as big and hairy as Chewbacca couldn’t disguise himself (in fairness, my dad only knew what he’d seen in the original trilogy, and he didn’t understand that Chewie wasn’t the only Wookie; clearly, he needs to see the Star Wars Holiday Special).

Anyway, this Chewie originally also came with a battle ax, which was another casualty of The Great Dog Attack. Luckily, most of the figure survived, though the part of his cape that attached to his back was also broken off; I’ve posed him just holding the cape instead. Is this whole design pretty ridiculous? Sure. But I thought it only made him look even cooler. If I’m being honest, I still do. 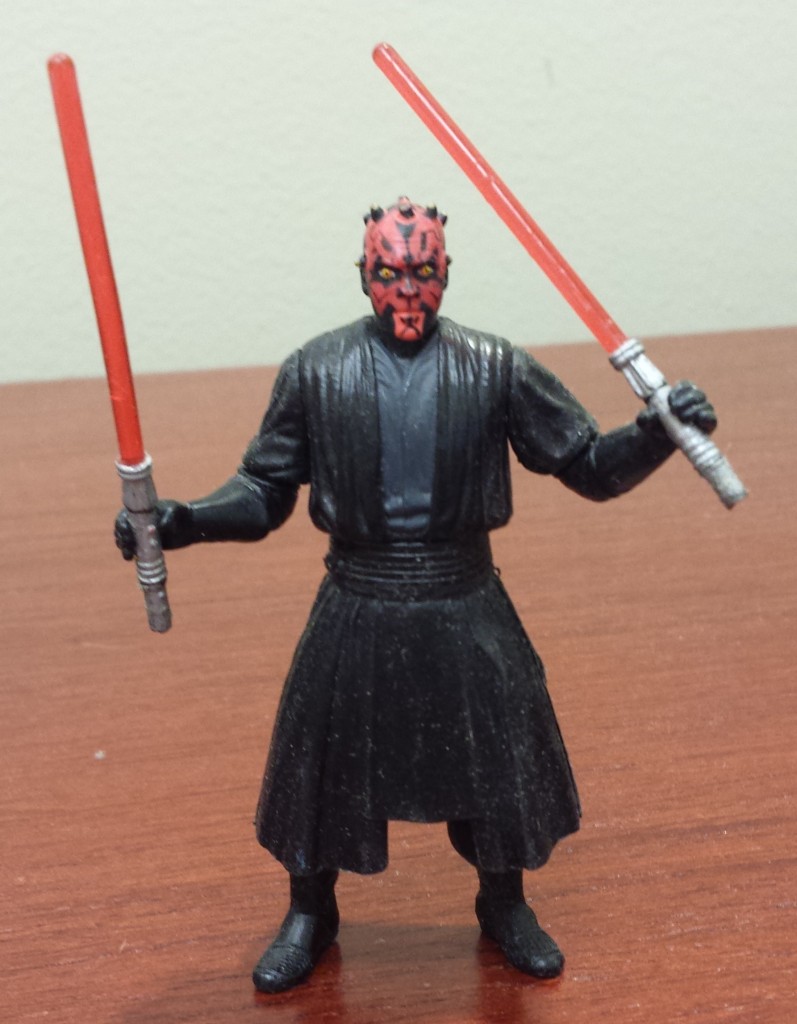 Darth Maul was the only prequel action figure I ever bought, the result of those movies coming out right as I was starting to outgrow the toys (boooo Young David; action figures will always be cool) and the underwhelming quality of the films. But I still think Maul himself was undeniably cool. Devoid of any characterization, but he kicked ass, and the double-bladed lightsaber ruled. This action figure kicked ass too; his face still looks intense even now. His double-bladed lightsaber broke in two at some point, but he actually looks just as cool holding two lightsabers now instead. 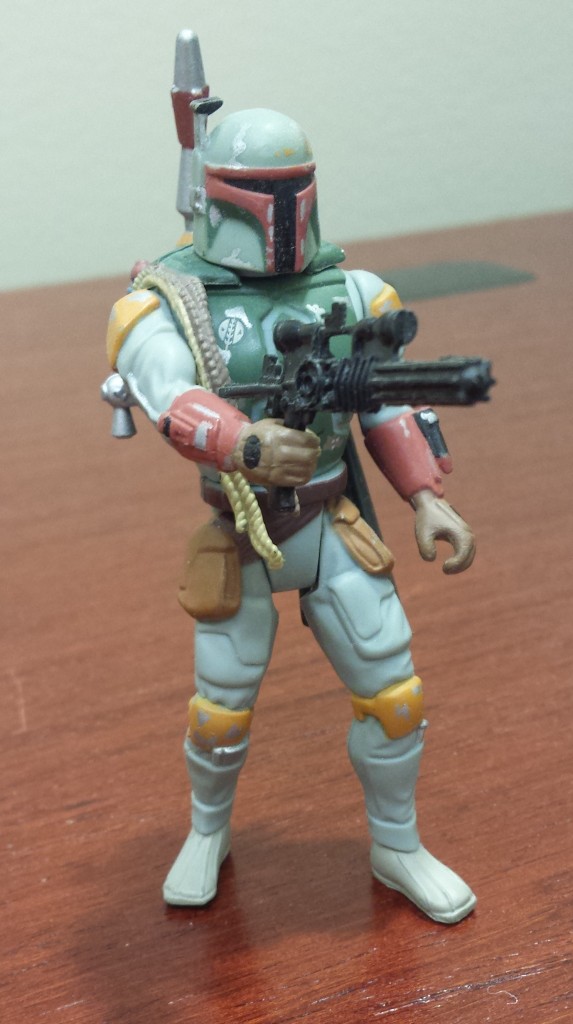 The king! You watch the original trilogy as an adult, and you realize how little of a factor Boba Fett actually is. He doesn’t really do that much, and he dies (or only appears to die, if you’re an old EU fan) in the dumbest way possible. But never mind all that. I fucking loved Boba Fett. He looked cool as hell, so much so that he was the only of my destroyed or damaged figures that I ever got around to replacing. He had a friggin jetpack! I’ll never not consider Boba Fett to be cool. 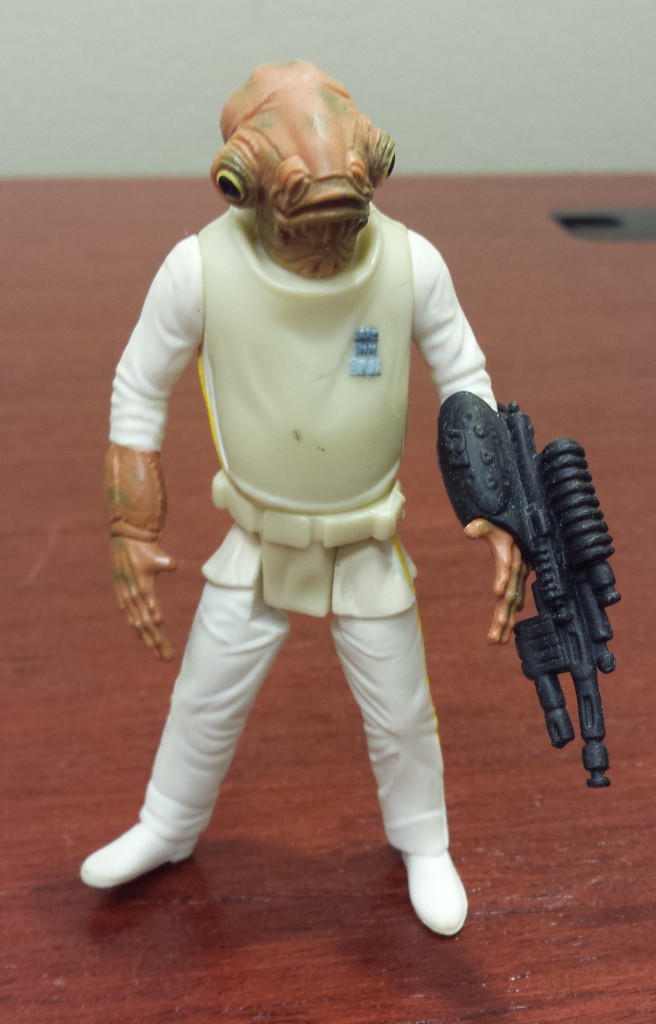 Surprised? I don’t care. I love me some Ackbar, and no, this is not a trap. That fishy bastard is just magnificent, and he could lead my armada into battle any time, if you know what I mean (I don’t even know what I mean). His figure was a huge favorite; I think generally, that era of figures managed to look much better when not having to replicate a human face. He also had my favorite gun of any figure, attaching on his arm using his fishy arm scales. 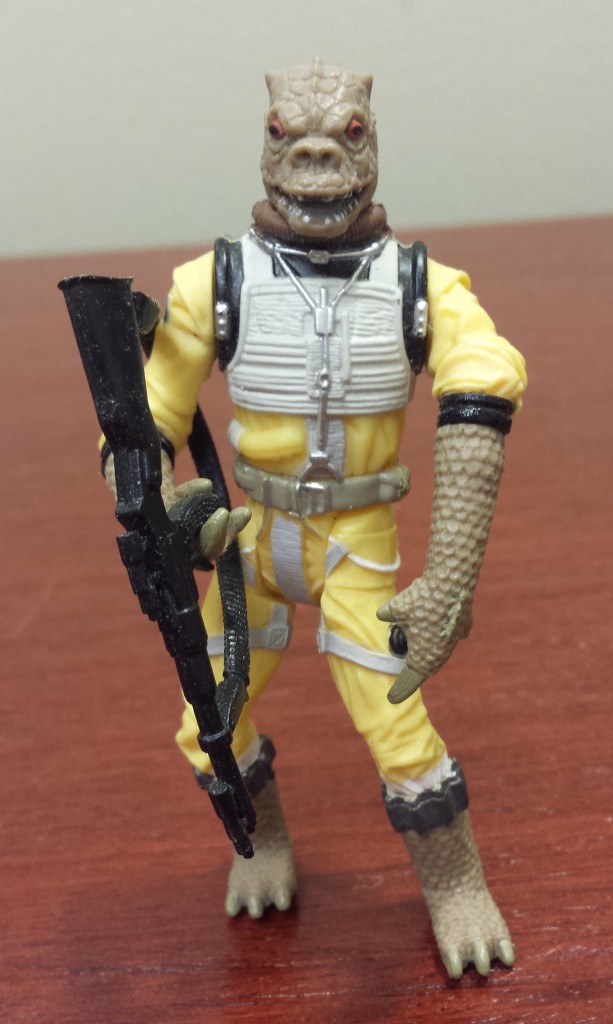 And at last, we come to my enduring #1. Like I said, I just loved the Bounty Hunters, and Bossk looked awesome. He does even less than Boba Fett in the films, though I enjoyed getting to read about him in the old EU. But I loved that he looked like a giant lizard, and managed to pull that off.  Have I ever lay in bed at night and wondered about who would win in a fight between him and a member of the Gorn? You’re damn right I have. And it’s Bossk. Bossk wins that fight, Bossk wins these rankings, Bossk wins everything. My fingers are fully crossed for Star Wars Episode VIII: Like a Bossk.