Daredevil Week rolls on here at Seven Inches, as we’ve arrived at the last day before the new Marvel/Netflix series debuts. And since the new Daredevil show will examine the hero’s origins, I’m finishing off our look at classic DD comics with a pair of origin stories: Daredevil: Man Without Fear, the five-issue miniseries by Frank Miller and John Romita Jr., and Daredevil: Yellow, the six-issue mini by Jeph Loeb and Tim Sale.

Man Without Fear is usually regarded as the more seminal work, frequently cited as one of the character’s greatest classics and as the definitive DD origin story. It’s also a big influence on the new Netflix show, making it even more important. But at the risk of being overly contrarian, I didn’t like it at all. I’ve already covered the other four big collections of Frank Miller’s DD work, and Man Without Fear is actually my least favorite of the five. Even Vol. 1, which has terrible writing for much of it, at least ends with a strong flurry and has wonderful art by Miller and Klaus Jansen throughout. MWF is still bad writing, but with less redemption and ridiculous art by John Romita Jr.

I think MWF suffers more from the comparison when you read it, like I did, right after Miller’s other DD work. Everything in it feels like worse versions of his stories from his original run. Things that worked well for Miller in quick flashbacks years earlier are expanded and changed here, and become worse for the wear. The origin is ridiculously on the nose. Kids chant “Daredevil” at Matt as a boy. His father’s boxing costume is literally an exact version of DD’s later costume — if you think that’s an exaggeration, it’s really not. Why would a boxer wear a mask? Because that’s how dumb this story is. With that background, it’s amazing that anyone doesn’t know Matt is Daredevil as an adult. “Hey, do you the guy whose childhood nickname was Daredevil and whose father wore an outfit exactly like Daredevil’s might have something to do with Daredevil?”

The stupidity doesn’t end there. Miller seems to think that DD needs to be even darker and edgier for this origin, so he has Matt kill some people. The best (read: worst) of them being when he accidentally murders a stripper who, as far as we’re told, was doing nothing illegal. Matt is sad about it for, like, a minute, then he just moves on with his mission. Whoops, sorry about that, innocent dead lady, but I need to get back to throwing bad guys through skylights with 100-foot drops! The worst part, though, is probably the expanded part given to college-age Elektra, who was a fairly normal young woman living an abnormal life in the flashbacks Miller wrote in his original run. In MWF, she’s literally insane, murders a whole lot of people in cold blood, and her “dates” with Matt consist of getting him in trouble and almost killing him and herself. The entire dynamic that worked so well in Miller’s original run is gone; Elektra and Matt had originally had a sweet but brief romance, and a big part of what had worked so well in that original version were Matt’s emotions in seeing the innocent young woman he’d once known now driven by loss to become a deadly assassin. But in the MWF retcon version, it’s perplexing why Matt would have any fond memories of his whirlwind insane romance with Elektra, and the loss she goes through feels irrelevant because she was always a psycho killer anyway. Oh, and John Romita Jr. is the worst, especially in drawing Elektra: 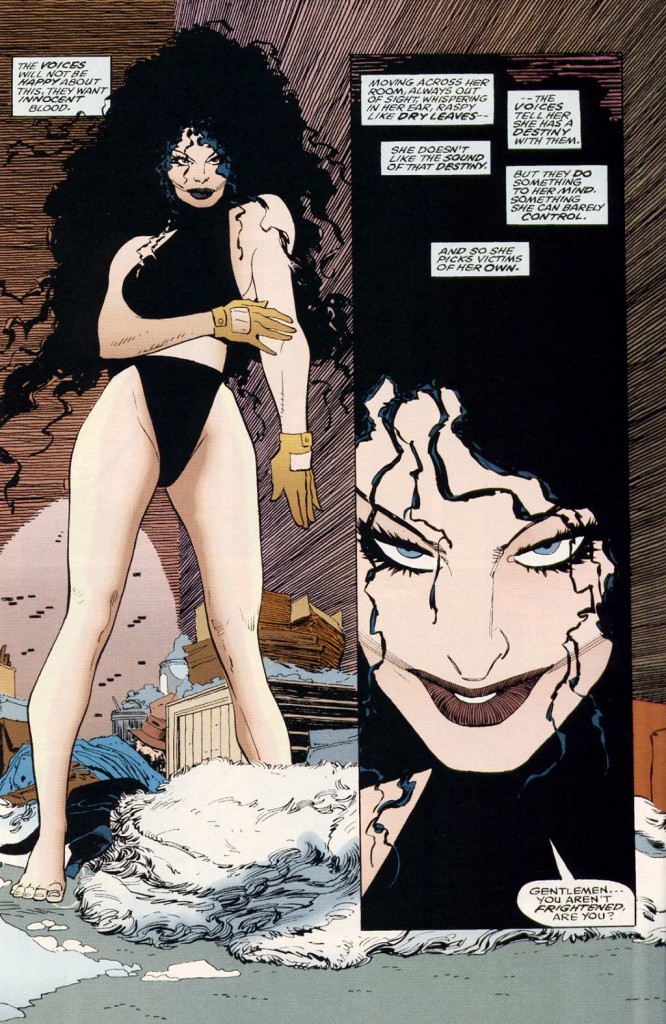 It’s not like Miller’s art in his original run shied away from sexualizing Elektra, at all, but the above page from JRJR looks especially ridiculous to me. I assume she’s supposed to look sexy and/or scary, but she just looks gross. And JRJR’s version of Matt usually seemed bulky, as opposed to the lithe gymnast style that Miller tried to use. From that, we got the retcon insertion of Matt’s new first costume, an adaptation of which will also be in the new show: 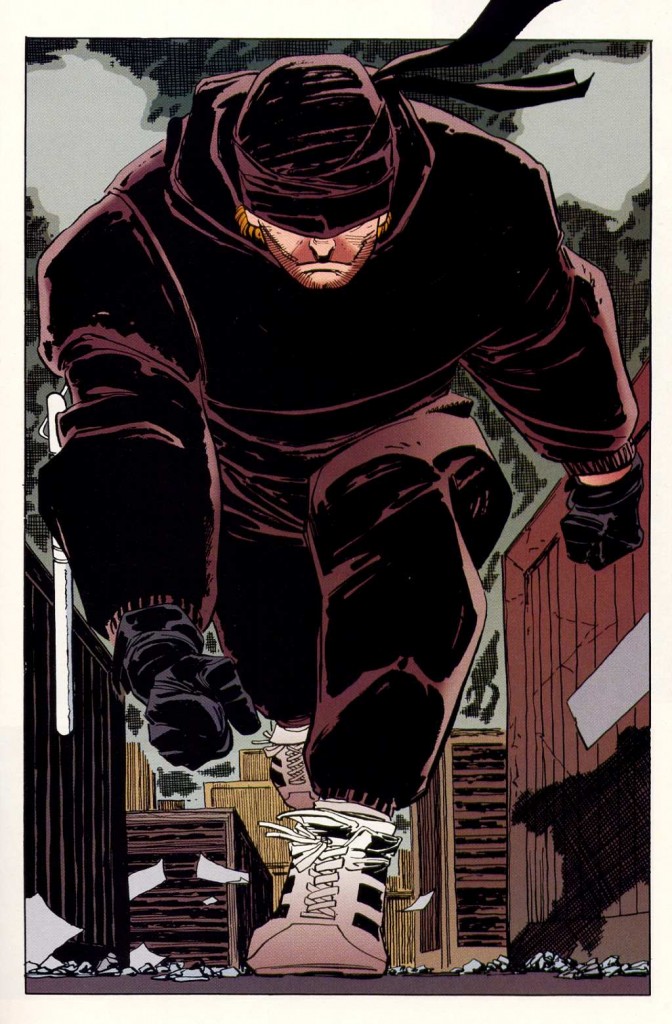 For some reason, those sneakers just crack me up when placed with the rest of the black ensemble; the effort is to make Matt look tough and intimidating, and then he puts on some regular white tennis shoes to finish it off. Anyway, despite my feelings about MWF in its comic book form, I still think its loose adaptation can work really well in the show. With the exception of Elektra, who isn’t going to be in Season 1 anyway as far as we know, most of the MWF story is stuff that theoretically could work, but just falls very flat here to me. Clean it up, cut certain areas and add others, and this dark DD origin could still be very cool. For instance, the rise of Kingpin to crime boss is reduced to about two pages in MWF, while all indications point to it being a major emphasis of S1 in the show. Changes like that still leave me optimistic about the new live-action DD, regardless of my feelings about this comic.

But where I have a mild disdain for Man Without Fear, I love the slightly less appreciated Daredevil: Yellow, which I would currently have as my favorite non-Miller Daredevil story (though I have a couple notable gaps in my DD reading). The pairing of Jeph Loeb and Tim Sale did several stories, including Batman: Long Halloween, Batman: Dark Victory, and Superman for All Seasons. The success of Yellow led them to do a series of color-themed Marvel stories — Spider-Man: Blue, Hulk: Gray, and the aborted Captain America: White — each with similar structures of the hero looking back on early days while dealing with loss. But Daredevil: Yellow was my favorite of all their collaborations.

As many people have pointed out over the years, a lot of Daredevil stories essentially try to make him into a Batman knockoff. Miller’s run certainly had heavy aspects of that; even going back to the 1960s, other than his blindness, DD’s premise has basic similarities to Batman: no physical powers, murdered parent(s), one-man war on crime. But Yellow veered away from that, at least in tone, even while retelling the same story elements. The biggest key is that the Loeb/Sale Daredevil actually has fun. He’s not haunted by and obsessed with his heroic mission, in the traditional Batman style. He’s more of a swashbuckler, fighting crime but making  a quip here and there in the process; after his initial quest for revenge, what keeps him going out as Daredevil is that he finds he enjoys it. This is a somewhat rare version of the character who’s actually happy in his early days. One of the main plotlines is a silly but fun love triangle between Matt, Karen Page, and Foggy, that becomes a square with Daredevil entering as well. 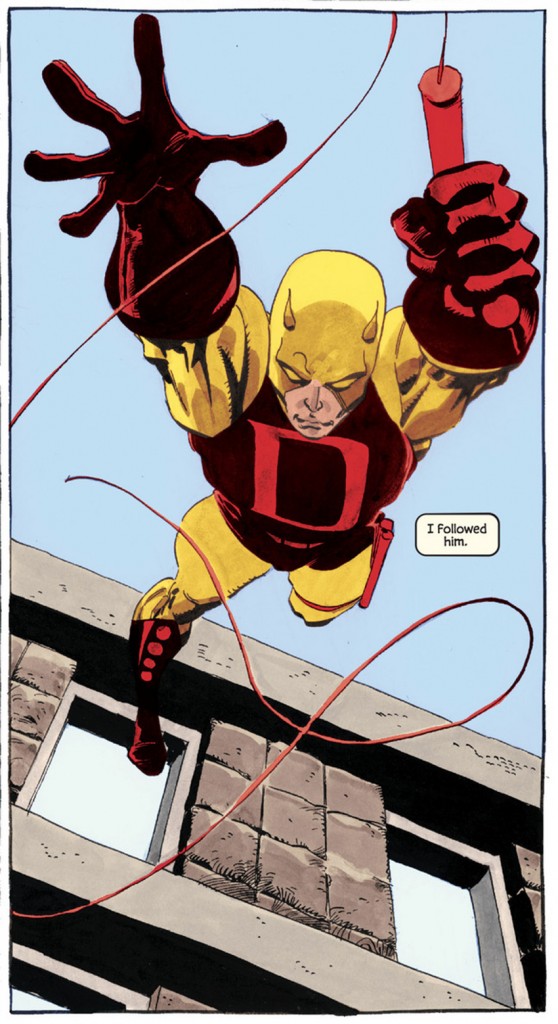 Which is why the story is all the more heartbreaking. Yellow is a flashback story, told by a grieving Matt as he copes with the loss of Karen, who’d recently been killed off in a story by Kevin Smith and Joe Quesada. Loeb and Sale weave a combination of mournful regret and youthful adventure that makes the past feel all the brighter and the present all the more bittersweet. It’s a delicate emotional balance that’s hit perfectly and still reverberates with me every time I read it.

Yellow isn’t made for gritty TV adaptation the way that Man Without Fear is, and I doubt we’ll ever see DD’s yellow costume in the show. But if you want the best comic-book look at Daredevil’s origins, I would argue that Daredevil: Yellow is where you’ll find it.