Welcome to the Binge Project series! These Binge Projects will feature me reading or watching an entire run of comics, books, TV shows, or other media in rapid order, then writing expansively about the experience. This installment takes an in-depth look at Alan Moore’s Swamp Thing. Moore’s run covered issues 20-64 and Annual #2, originally running from January 1984 to September 1987. Click here for Part 1. 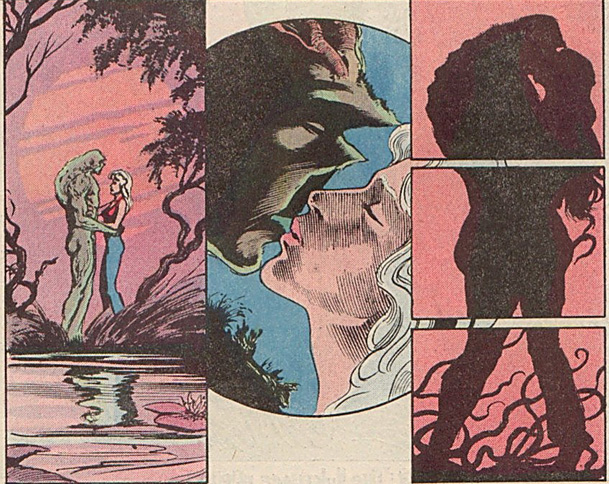 You know how most stories are going to end, even if you don’t realize it yet.

We become accustomed to traditional story structures and characters who fit loosely into various archetypes and stereotypes. The details change, but the basic foundations of storytelling are rarely deviated from. As a result, we’re conditioned to expect certain character types, certain plot points, and certain resolutions, even when we’re not necessarily conscious of our expectations.

Good storytellers know this, and they also know that predictability can be a problem. So they find themselves with two choices: change the structure, or work within it in creative ways. The latter is more common, but perhaps more difficult to stand out as truly unique. The former too often lends itself to changes that are motivated by pure shock value — the famous twist ending that serves little purpose beyond being a twist.

Alan Moore is a master of unpredictability in SWAMP THING. You may correctly guess a resolution of a story, but you might never guess the path Moore will take to reach that outcome. There’s an issue where Swamp Thing thinks to himself that he’s been too human in his approach to fighting, not taking full advantage of all that he is. It’s an apt metaphor for Moore’s storytelling, even if not an intentional one. We’ve been too conventional in the way we look at stories, and Alan Moore delivers us from the confining nature of our expectations.

An archenemy returns, but not in any way you’ve seen before. Deaths and resurrections occur when you least expect them, but always with a deeper purpose than shock value. The natures of good and evil are played with in ways we’re not accustomed to from comic books. And if there’s deus ex machina in the book, it’s only because Moore dares to take on divinity itself.

But perhaps nothing exemplifies the way Moore toys with expectations better than the central romance of his run. 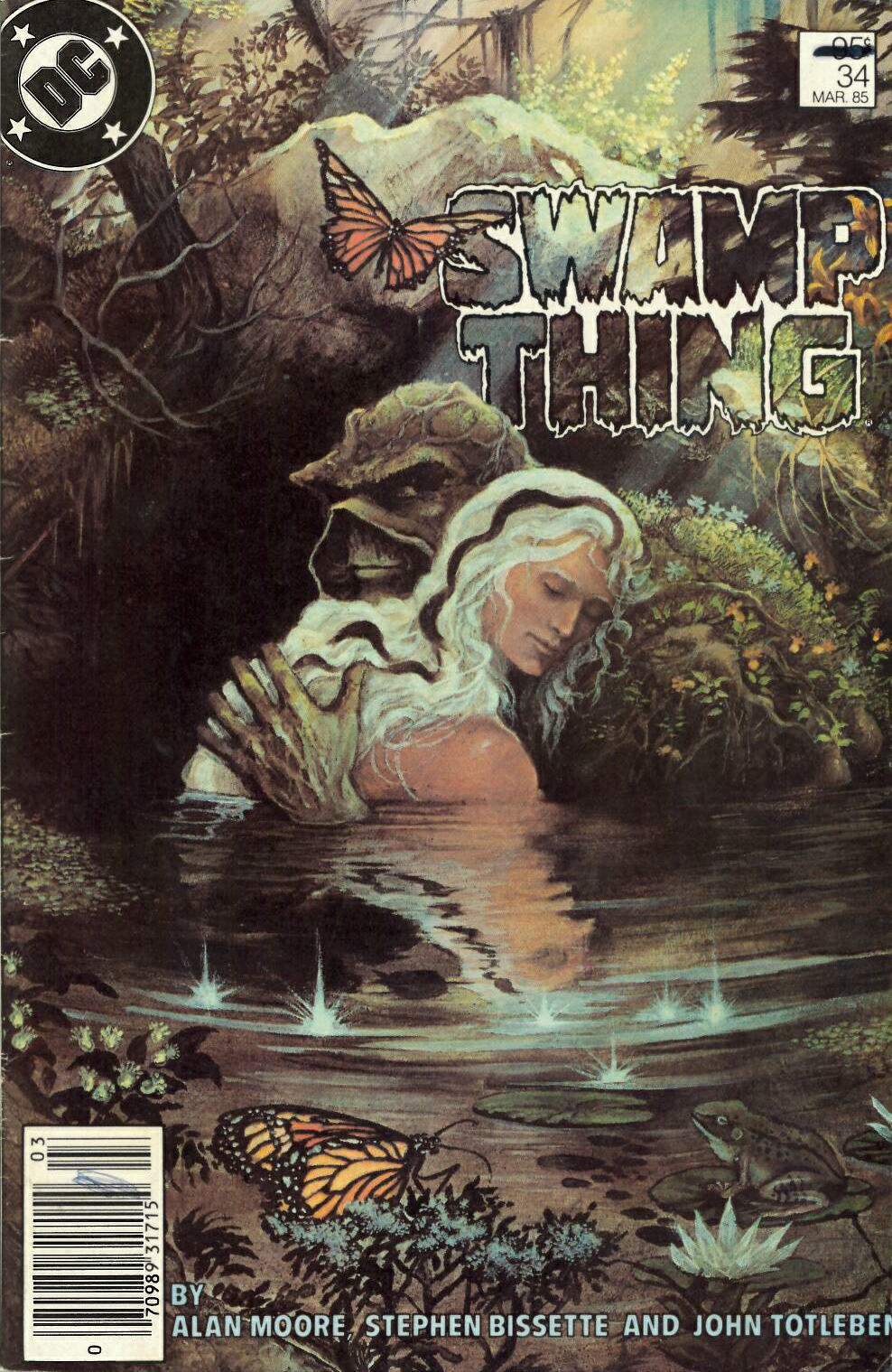 Swamp Thing is a book built primarily around two characters: Swamp Thing himself and a woman named Abigail Cable. Abby was a holdover from Martin Pasko’s run, really the only holdover who had a lasting place in Moore’s plans. But Moore’s plans involved taking the character to great new heights.

Early in the run, Abby is in a failing marriage that borders on abusive. Her uncle is Swamp Thing’s greatest enemy, and her father was undone by that uncle’s machinations. Throughout the run, Abby will encounter countless horrors that would break most people. Yet Moore fills her with an admirable strength. She provides for herself and protects others. She acts as a hero in her own right on multiple occasions, as Moore refused to paint her within the confines that female love interests were traditionally backed into in comics.

Swamp Thing, meanwhile, is a being who begins the run with an identity crisis that takes the entirety of Moore’s tenure to fully sort out. He learns and he grows, but he has setbacks and falters. One of the most common praises of the character under Moore is the how human he is. I’ve seen that said so often that it feels almost clichéd to say it again — yet it’s still unavoidably true.

Comic books have grown increasingly more dynamic over the years, but even today are built around primarily flat characters — archetypes representing virtues and vices who rarely change long-term in significant ways. Even when creators try to do big shakeups, it’s usually more about the changing the character’s circumstances than the character himself or herself. There’s often not necessarily anything wrong with that. Flat characters can still have exciting adventures and intriguing interactions, even if they are largely grounded in the same general typecasts.

Swamp Thing and Abby are different. Neither character ends Moore’s run as the same person from the beginning. Nor do I just mean Swamp Thing’s updated origin story; these characters truly change and grow in very real and human ways. Even if the characters don’t resonate with you the way they did with me, they undoubtedly break out of the flat archetype system of comics. No one description adequately portrays them throughout the run. At times, they stand in stark contrast to the darkness of the world around them; at times, they reflect it. At times, they are vessels of social commentary; at times, they are catalysts for change.

But at their best, they mirror each other, complementing each other’s hopes, fears, quirks, flaws, successes, failures, potential, and above all else, love.

For the book is also a love story — unconventional yet beautiful. 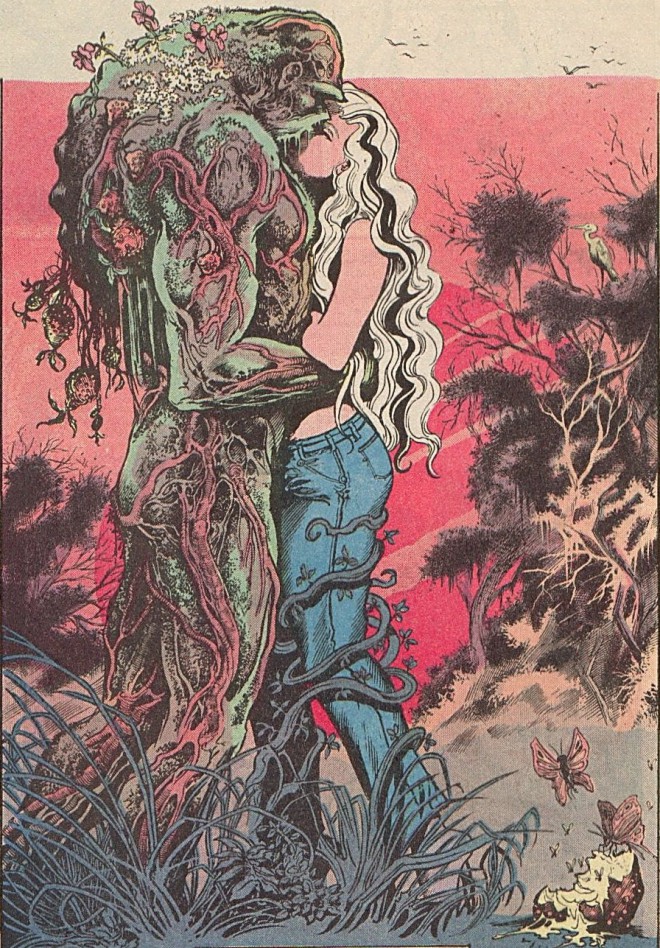 We watch as Swamp Thing and Abby grow to care more and more deeply for each other during the traumatic experiences they share. When it erupts into a full-blown romantic relationship, I actually felt a little misty at their first confessions of love. They grow in leaps and bounds, yet we also get to see them bicker about the occasional mundane concern, like Swamp Thing tracking grime on Abby’s carpet.

And for as bizarre as the premise sounds (and is) of a relationship between a beautiful young woman and an intelligent plant, what’s interesting is that it doesn’t feel weird at all when Moore writes it. It all develops quite easily and naturally, and you come to care for the relationship in the same way you might care for Clark and Lois, Reed and Sue, Scott and Jean, or any of the other comics classics.

The exception to the ease and normality of the relationship comes in issue #34, “Rite of Spring.” The bulk of the issue involves Swamp Thing and Abby becoming intimate, albeit on a metaphysical plane, rather than physical. The issue plays out like the most gorgeous drug trip anyone has ever taken, thanks to incredible artwork from the great art team of Stephen Bissette and John Totleben, who will be discussed much more in a future installment. On top of that artwork is flowing poetry by Moore, who elevates his already high-level writing to a classics course of prose while describing the otherworldly joining of Swamp Thing and Abby.

It’s a beautiful issue, and one reader wrote in afterword to call it the best comic he’d read in 40 years as a fan. I can understand that, if the ambitious undertaking hits that right resonance with you as a reader. Personally, I enjoyed it but wouldn’t have it higher than my fourth or fifth favorite issue of Moore’s run. As much as I can appreciate its beauty, the issue felt overwritten to me. It aimed high and tried hard, but I felt too aware of how high it was aiming and how hard it was trying. I think I’m in the minority, so know that many fans view it as one of, if not the most romantic comic ever made. Personally, I prefer Swamp Thing getting huffy when Abby keeps trying to put newspapers under him as he walks around her house.